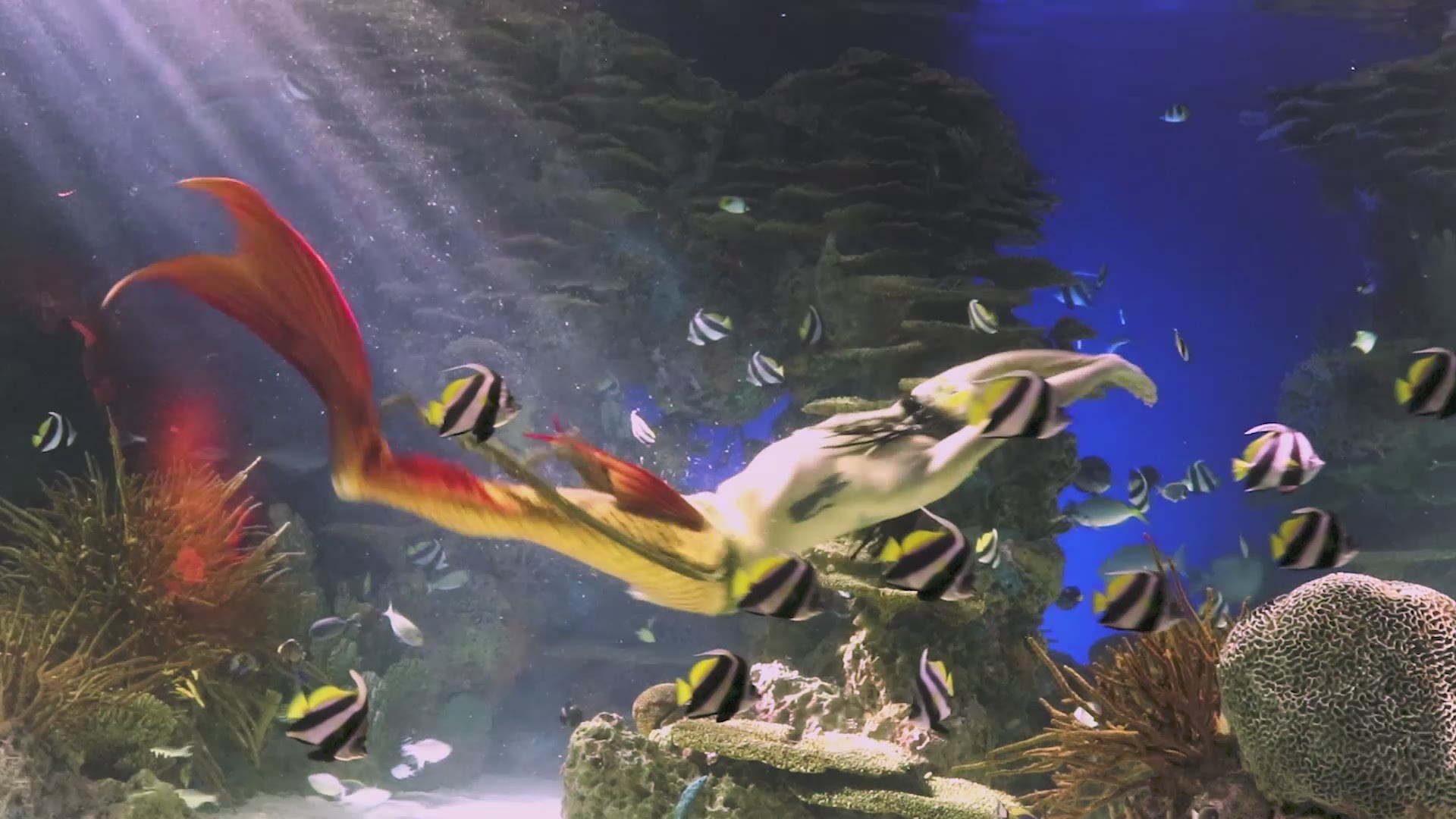 GATLINBURG, Tenn. — Long after sea-weary guests trudge home and the last shark has slurped down a supper of mahi, creatures of a more mystical sort emerge from the depths of Ripley’s Aquarium of the Smokies coral reef enclosure. More flamboyant than the translucent jellyfish in the tank next door but manifestly less poisonous than the fox face rabbit fish darting around their fins, these professionals spend hours submerged in this tank to refine and perfect the art of mermaiding.

Far from stuff of myth and lore, real-life mermaids are having their moment as summer unfurls across East Tennessee. In Pigeon Forge and Gatlinburg especially, pods of professional mermaids spend hours flipping and swimming in pools and tanks to help them embody the spirit of sea sirens to perfection.

Daley Rinnes is Ripley's Aquarium of the Smokies’ lead mermaid and has almost half a decade of experience in the tail.

“Mermaids do well here in the mountains," she told 10News. "I love going down there it's really a different world."

Like most professional mermaids, the water began beckoning her from the time she was small.

“I started looking at people swimming out in the ocean with dolphins or other marine life and I just thought it was so beautiful,” Rinnes said. “My favorite thing about the water is how freeing it is. You really have to focus on yourself being in the right headspace."

The mermaid show at Ripley’s Aquarium of the Smokies has been delighting guests with an eight-minute display for six years. Bringing these most quintessential of fantastical creatures to life is a task that longtime hobbyist and newly finned professional Fernando Delequiox has been waiting six years to try.

"This is me. This is what I wanna do," Delequiox said. "It's happening and that's magic itself."

Though he spent years performing at festivals, this is his first year as a paid mermaid at Ripley's. And in an industry dominated by mostly females, he’s also the only merman in the show.

“This is the first aquarium that has accepted me as a professional merman. That’s big,” Delequiox said. “As a kid people were always like, oh you want to be Ariel. It’s like no. I wanted to be her dad.”

Delequiox said he isn’t nervous for his first show because he has been practicing and there's a level of calm that accompanies working alongside the other Ripley professionals.  But previous mermaiding experience and camaraderie aside, the Florida native said it can still take a second to get fully comfortable in the tank.

"It's a milestone for me going from a hobbyist in swimming pools to stepping into an actual professional aquarium show," he said. "This is what I want to do."

While Rinner grew up compelled to the sea, she never joined an official swim team. That lack of competitive relationship she had to the water helped her embrace the unique way a tail forces you to swim.

“We get a lot of swimmers and we have to work on slowing them down. Because you think you want to match with the song, but then you run out of energy too quickly,” Raines said. “You can't just swim like you're a human. You have to embody a different person."

That can be a tough task in a saltwater tank that holds 18,000 gallons of water. Though ceiling-to-floor glass allows visitors a pristine underwater view of the mermaids as they perform, the actual performers can’t see a thing and don't come up for air often. Part of their training is just recognizing where you are in the tank so you don’t slam headfirst into a scabby coral reef.

"It can become dangerous," said Rinnes. "You want to be a strong swimmer. You want to be confident because you are in a different environment."

Graceful though they move underwater, the tails themselves take a second to get used to. Typically, mermaids start with a monofin and work their way up to fabric fins. The silicone fins that performers wear at Ripley's are the "top-dog" of mermaid tails, but they're also the most difficult to get used to.

"You feel realistic," Rinnes said. "It suctions your legs together in a way that makes it harder for them to move if you’re an inexperienced swimmer because of the tricks."

Those tricks include wall-climbs and backflips that have to be done gracefully enough to suspend the audience's belief in magic for at least eight minutes.

"People's favorite thing to do is see you come up and put your hands on the acrylic," she said. “It’s really a different world. You can’t see [the crowd], but you can feel their energy.”

Even with so many eyes watching, the mermaids' time underwater is often a serene time of self-reflection.

“I feel like this majestic, amazing creature,” Delequiox said. "If I can get you out of your world for ten minutes and just forget everything, job well done."

Iconic fixtures though they may be to an increasing amount of aquariums across the country, pockets of pods who aren't being paid to mermaid are popping up as well.

The Nashville Mermaid pod is one such underwater squad.

Spearheaded by successful mermaid influencer Abbey Boutwell of Mermaid Vlogs and longtime professional mermaid Sabrina Rose, the group meets up in private pools near Nashville and across the state.  It's a chance for the women to get in some quality swim time and embrace their "mersona" - the person they become when they put on a tail.

“It's fintastic to see all their different styles,“ Rose said. "Seeing all the perspectives of their character coming out. Making themselves feel even more comfortable in their own scales rather than their own skin."

Often she says, the "mersona" a swimmer chooses to express themselves with is a bigger expression of who you already are. 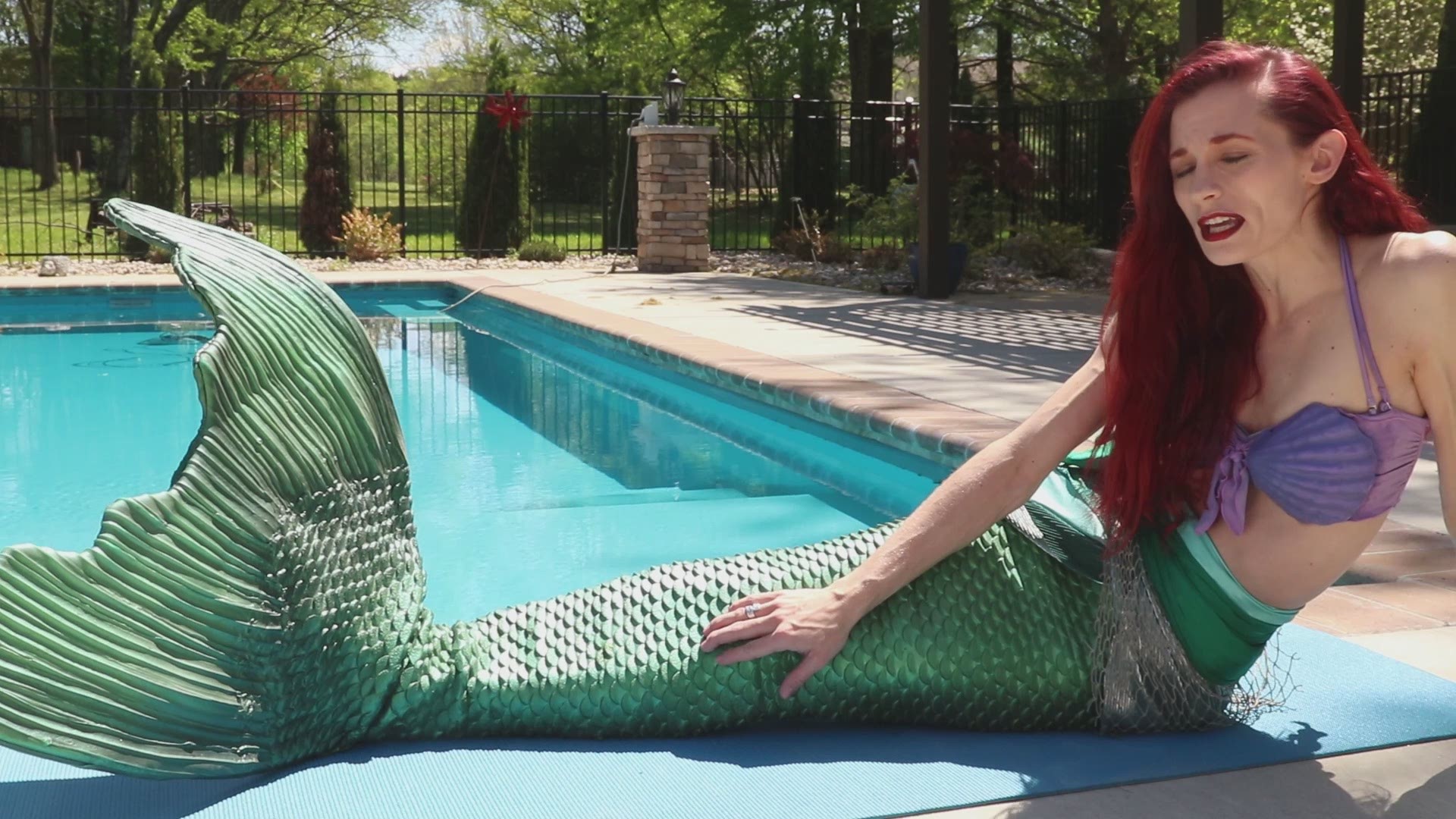 "[Mermaiding] gives you a little bit more self-confidence for sure, but don’t swim too far into the depths you definitely want to keep your own self," Rose said.

Sabrina Rose has been a professional mermaid for almost four years, but says social media outlets like Facebook and Etsy have made both finding a mermaid community and getting your own tail more affordable. That's drawing people deeper into this undersea culture.

And these moments she spends underwater teaching flips and tricks to brand new mermaids, without getting paid, are just as profound for her.

"It's given me an opportunity and such a blessing to be able to help others and create magic for others who might not be able to make travels outside of the state," Rose said.

Overwhelmingly, professional mermaids say their job has called them to something greater than just entertainment. Not long after stepping into their first fins, mermaids begin to feel a deeper connection to our endangered water supplies.

It's something Sabrina Rose is most passionate about in her career as a mermaid.

"Just the voice it gives to some others that might not be able to hear someone who has a message to speak about things like recycling or ocean awareness and freshwater care," Rose said.

Delequiox said physically being confined to a fin gave him a greater understanding of what large mammals feel in captivity.

"In the fin, by the time you build full speed you have to turn around and that can get annoying," said Delequiox. "Imagine doing that the rest of your life. It’s very claustrophobic."

Not only do mermaids feel a sense of empathy for our oceans, but the mythology behind their finned personas allows them to advocate for real and pervasive environmental issues.  Rose also works private events and uses her position to speak for an undersea experience the younger generation tends to hear.

"It's one of those things that, going to different lakes and different rivers, you see a lot of plastic waste and a lot of tires and debris that people will take if they go to the lake," Rose said.  "If people take it in they don't take it back out, but it's about taking care of what we have for future generations."

Delequiox, a Florida native, grew up close to the water and developed a connection to the creatures who live there. He hopes to eventually replace animals who didn't have a choice to perform in aquariums with performers like him.

RELATED: Here's what's in the water where you play and fish

"I want to save the whales," he said. "With conservationism, I want people to understand that we have a deeper connection with the ocean that’s symbiotic. We’re in this chain...so we need to make that connection."

This year, Ripley's Aquarium of the Smokies received a record number of applicants for people who wanted to be mermaids. For the people who embody these magical creatures throughout long summer months to the delight of hundreds, that's fantastic progress. It signifies that more people might take an interest in the messages of conservation the mermaids work so hard to relay, and that's not exclusive to children.

"You can see their dreams coming true before your very eyes," Rinnes said. "People do hold onto it for years and come back and they want to do it."

Delequiox counts himself as one of those lucky people who gets to live his dream in the tank.

"I do want to show people that you can do what you want," said Delequiox. "Shuffle the deck and make it work for you. It's amazing to be able to have the opportunity to do this."

The Ripley's Aquarium of the Smokies mermaids are performing now in Gatlinburg.

MORE FROM THE SMOKIES

SkyBridge, the longest pedestrian bridge in the US, opens in Gatlinburg

Need to Know: I crossed Gatlinburg's new SkyBridge, didn't soil myself, & lived to answer your questions

The rides at Dollywood's new 'Wildwood Grove' are absolutely family-friendly...but I still got a little scared

Bear takes a dip in hot tub at Gatlinburg cabin

You can now tour the Smokies in a PINK Jeep Wrangler