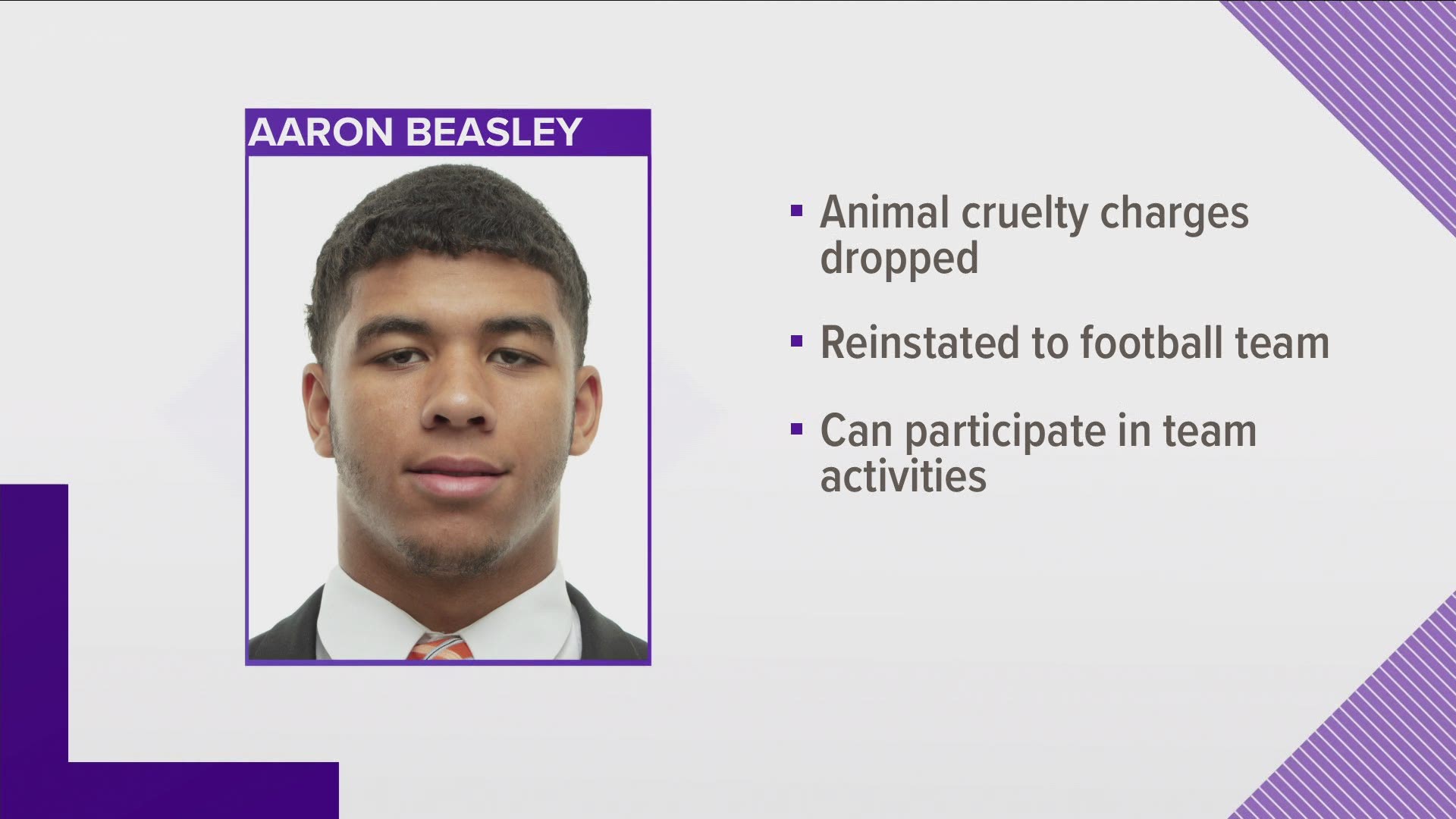 KNOXVILLE, Tenn. — UPDATE (June 25): The University of Tennessee Football team has reinstated junior linebacker Aaron Beasley after the animal cruelty charges against him were dismissed by a Knox County Sessions Court judge on Thursday, GoVols247 reports.

Beasley had been suspended from the team indefinitely after a report of alleged animal abuse in April.

"We are happy with the court's decision to dismiss the case against Aaron Beasley. As defense counsel stated this morning, Aaron maintains his innocence and denies these unfounded and unproven allegations."

The law firm representing a UT football player accused of abusing a kitten is denying the allegation.

Aaron Beasley has been issued a misdemeanor citation for animal cruelty on Tuesday, according to a statement from the Bosch Law Firm.

"We vehemently deny this allegation and look forward to a speedy resolution,” the statement reads.

According to a GoFundMe page, the cat's owner said she was in the process of moving when she came home and found her 6-month-old kitten named Nugget hiding under a dresser. She said the kitten could not walk and screamed when it was picked up.

On Monday, UT Athletics issued a statement indefinitely suspending the junior from Franklin, Ga. from the team.

“We have received the incident report from the Knoxville Police Department. Aaron Beasley has been suspended indefinitely from all football team activities as we await further information," the statement said.

She said that the couple came home from the grocery store to find the cat in her room eating leftover food and that it was an ongoing issue with the cat. She said Beasley took the cat and locked it in a bathroom, according to the report. A few hours later, she said she opened the bathroom door and the cat ran out and into her owner's bedroom.

The other roommate said she was in her room that night and heard Beasley's girlfriend tell him "you can't do that" and start crying. She also claimed she had a text from the girlfriend saying that Beasley put the kitten in the toilet, the report says.

Beasley's girlfriend told the officer she did not see Beasley hit the cat or put the cat in the toilet.

The kitten was brought to an emergency room with brain damage and is expected to have difficulty walking, according to the GoFundMe page. It also has a bleeding hemorrhage in its kidney after being kicked, the owner said, and that it was placed in an oxygen tank.

"My heart is absolutely broken for him and I just want my baby to be okay and to stop animal cruelty," the organizer of the fundraiser said on the GoFundMe page. "I think it’s ridiculous I am having to make this but this is what it has come to."

It raised more than $2,000 as of Saturday afternoon.

A misdemeanor citation carries a sentence of up to 11 months and 29 days in jail, if someone is convicted, though people convicted of misdemeanor charges rarely spend time in jail.

This article was edited for clarity Sunday morning.