MEMPHIS, Tenn. — The Memphis Zoo is helping to care for some rare Mexican Box Turtles after they were found being smuggled at the Memphis Port of Entry, headed for Asia.

The turtles were wrapped in duct tape and socks, stuffed into baby formula cans, in shipments marked as spare parts and gifts.

You can read the full news release from the Memphis Zoo below:

The shipment was declared as “gifts,” but U.S. Customs and Border Protection agricultural specialists weren’t convinced. They referred the large cardboard box to U.S. Fish and Wildlife Service wildlife inspectors who peered into the container only to discover baby formula cans lined with aluminum foil. They opened one. Inside was a white athletic sock.

Inside that: Terrapene carolina Mexicana - Mexican box turtles, each one tightly wrapped in duct tape. The 20 turtles were illegally bound for Asia from the Port of Memphis in Memphis, Tennessee.

The two federal agencies followed that March 24 discovery with a comparable seizure on April 2. This time, they uncovered 16 Mexican box turtles, also wrapped in socks and trapped in duct tape. Their shipping documents described them as “spare parts for hydraulic pumps.”

Following these discoveries, the U.S. government put would-be traffickers on notice: The United States is watching - and the illegal wildlife trade is not welcome here.

“Wildlife trafficking is a serious crime that impacts imperiled species across the world,” said Edward Grace, Assistant Director for the U.S. Fish and Wildlife Service Office of Law Enforcement. “In this case, rare turtles were illegally smuggled into the U.S. The inhumane conditions in which they arrived shines a light on the dark and tragic world of the illegal wildlife trade. I would like to thank U.S. Customs and Border Protection, the Memphis Zoo, FedEx and our Service wildlife inspectors for their assistance with this case. Together, we can protect at-risk species for future generations.”

“CBP officers and agriculture specialists never know exactly what they might encounter on a given day,” said Mike Neipert, Director of U.S. Customs and Border Protection’s Area Port of Memphis. “We work closely with our partner agencies such as the Service to ensure that trafficking laws are enforced effectively, especially when it comes to endangered or regulated species. We’re glad that this joint effort resulted in these turtles being placed into a safe and caring environment.”

Since their discovery, the turtles are being cared for at the Memphis Zoo. Two died, weakened by the strain of being smuggled from Mexico to Memphis. Yet there has been one viable egg laid.

“We were pleased that the Memphis Zoo could offer assistance in stabilizing and treating these smuggled turtles,” said Chris Baker, Assistant Curator of the Memphis Zoo. “When they arrived, they were dehydrated and underweight from the holding and shipping conditions. Once they conclude treatment and become stable, they will be distributed to AZA partner zoos with expertise in caring for the species.”

Mexican box turtles are found only in eastern Mexico within the states of San Luis Potosi, Tamaulipas and Veracruz. They live in dry lowland habitats, including tropical deciduous forest and thorn forest and scrub. However, in Veracruz, the species is also found in humid tropical habitats including rain forest.

Unfortunately, their geographic range is traversed by roadways, subjecting the turtles to road dangers and illegal collection. It is rare to find the species outside of Mexico. Their export from the country has been banned, and their presence in the legal pet trade is next to non-existent.

Mexican box turtles are listed under Appendix II of the Convention on International Trade in Endangered Species of Wild Fauna and Flora (CITES). Appendix II species are defined as species that may become threatened with extinction without international trade controls.

No one is certain precisely where the smugglers caught the turtles, so they cannot be returned to their original homes. For now, the surviving turtles are safe at the Memphis Zoo where they will help educate the public about the illicit nature of the illegal wildlife trade.

If you encounter potential wildlife crime, please report it to the Service’s wildlife trafficking tips line at 1-844-FWS-TIPS (397-8477) or email fws_tips@fws.gov. You might be eligible for a financial reward if your tip helps solve a case. 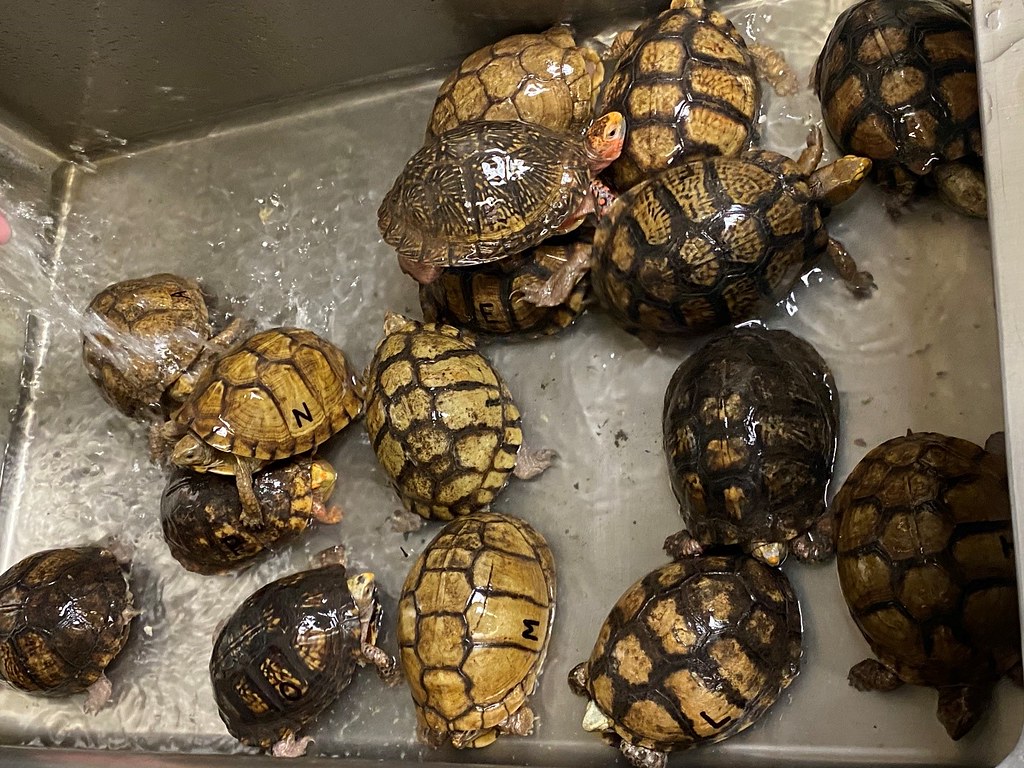