“You never imagine your child to go through this. He has had an inspiring fighting spirit since day one," said Emily Johnson. 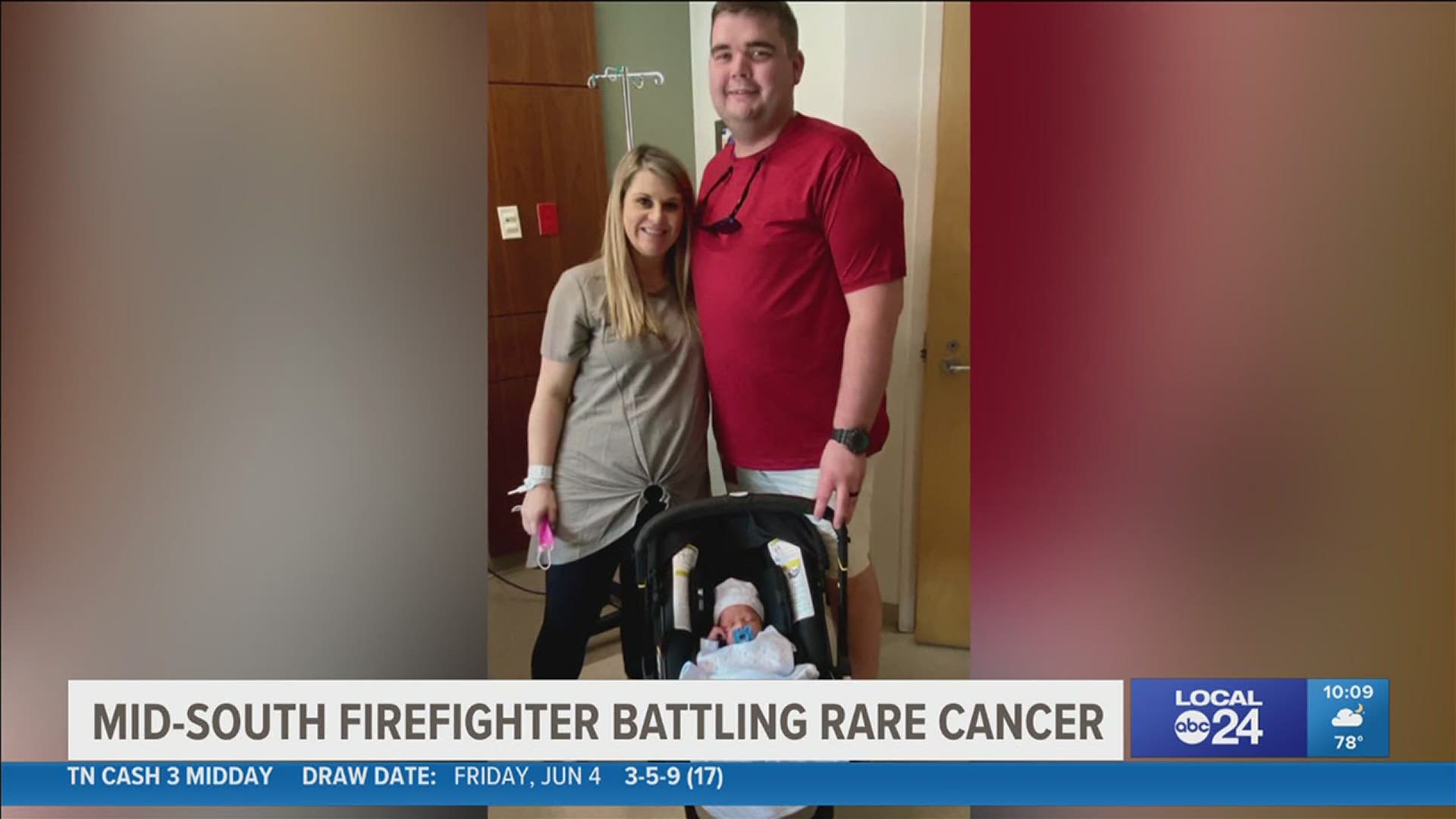 MEMPHIS, Tenn. — Andrew Johnson is one in a million in more ways than anyone can count.

His dad, Brian, and mom, Emily, always knew there was something special about him.

“Grew into a very, we think, well rounded man who is very generous with his time, very selfless,” said Emily. “It was always his childhood dream to be a fireman.”

Just over a year ago, his dreams shifted and life along with it. Andrew met his soulmate, Maggie.

The two married last September and shortly found out they were expecting their first child.

“He thought he was just gaining sympathy weight along with her being pregnant. He started dieting and exercising, but it wasn’t really working,” said Emily.

Andrew's blood pressure was going up and he had back pain.

“He came to a breaking point this year on April 1st. He told Maggie to take him to an ER,” said Emily.

After tests, doctors spotted what no one saw coming.

“It’s a mass on your adrenal gland," said Brian.

It’s a mass the side of a softball on your left adrenal gland…You’ve got cancer,” said Emily.

“He was given a prognosis of one to two years. It’s such a rare cancer that the doctor had only heard of it a few times,” said Emily. “It typically charges kids up to age five and six. Then, adults in their 30’s and 40’s majority female. So, we already knew that Drew was one in a million. Then, he knocked it out of the park with this. Then, he knocked it even further into outer space with it being so rare and he’s 25 and a male.”

Andrew spent days both in in-state and out of state hospitals.

Two weeks after his diagnosis, he and his wife welcomed their baby boy, Bo.

“They look out the window from the 22nd floor of his hospital room. He’s got a newborn and he can’t hold him,” said Emily. “You never imagine your child to go through this. He has had an inspiring fighting spirit since day one. To be there three, 30 years for Bo. His focus is Maggie and Bo. That’s what he lives for. If you can’t gain strength from that….”

“Watching your child take chemotherapy is the…well number one it’s something you’d never think you’ll experience, but it’s very very difficult to sit there because you feel helpless,” said Brian. “Your first thought that comes to mind is why couldn’t we trade places.”

Even though impossible, the family sees the possible through an outpour of support from firefighters wearing tin cards for Andrew and community members donating to a GoFundMe and wearing Drew's Crew shirts.

“I look at all of this, all of the outpouring of support. I said that’s a God thing. It has to be,” said Brian. "Doctors are extremely smart human beings, but they’re not going to control what ultimately happens. God’s going to do that.”

“At least for me, it’s been a real realization of how so much doesn’t matter and how precious time is,” said Emily.

Time. It is what is held dear and pushes forward through love.