The patient, survivor, physician's assistant, and now civilian astronaut is back home

Hayley Arceneaux was honored and welcomed back to the Bluff City from the very people she went into space for. 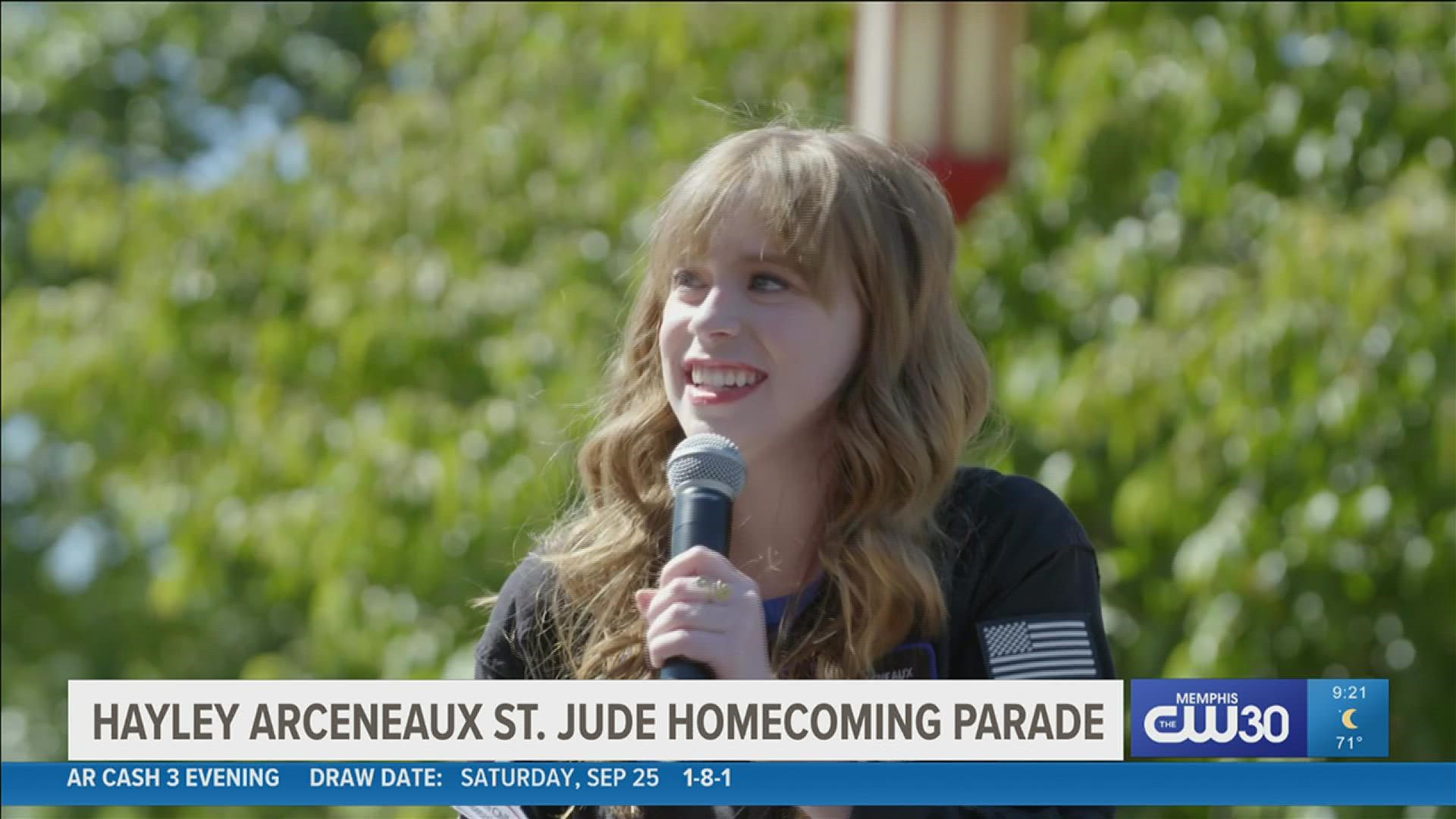 MEMPHIS, Tenn. — One week ago today, Inspiration4 came back to earth safely after becoming the first all civilian spaceflight.

Thursday, chants of "Hayley! Hayley! Hayley!" rang through the St. Jude Children's Research Hospital campus as Hayley Arceneaux returned to Memphis and St. Jude. Patients and staff honored her homecoming with a parade. As she made her way through campus, Arceneaux, the youngest American to fly to space and the first with a prosthesis, was celebrated by patient families, St. Jude and ALSAC staff at several locations, stopping to say a few words to each group.

She shared that the entire Inspiration4 crew was brought to tears when they landed safely back on Earth and learned that fundraising from their combined efforts and the support of people around the world had exceeded the $200 million goal they originally set out to accomplish. And fundraising is still underway.

Hayley's work as an ambassador for St. Jude has inspired the world to rally around the cause of finding cures for childhood cancer and other catastrophic diseases.

Even through my battle with cancer, I smiled, persevered, and when I was cured at @StJude, I felt like I was on top of the world. 💛

19 years later, still smiling, I became an astronaut with @inspiration4x and quite literally made it to the top of the world 👩‍🚀🚀🌎 pic.twitter.com/gVzNIVslu9

Thanks to the extraordinary generosity of Shift4 Payments CEO and Inspiration4 Commander Jared Isaacman and SpaceX CEO Elon Musk – who between them committed $150 million to St. Jude – the total campaign has generated more than $225 million in commitments for St. Jude.

Because of generous donors, St. Jude recently embarked on its new six-year, $11.5 billion strategic plan to triple its global investment to impact more than 400,000 kids with cancer around the globe each year.

"We were thrilled to welcome home St. Jude survivor, physician assistant, and civilian astronaut Hayley Arceneaux. Hayley has given hope to the kids of St. Jude Children’s Research Hospital and children with cancer everywhere by showing them that the sky is not the limit and to believe in a world of infinite possibilities," said Richard C. Shadyac Jr., President and CEO of ALSAC, the fundraising and awareness organization for St. Jude Children’s Research Hospital.