“Her determination has taught me more than I ever thought possible,” said Mr. Jones. 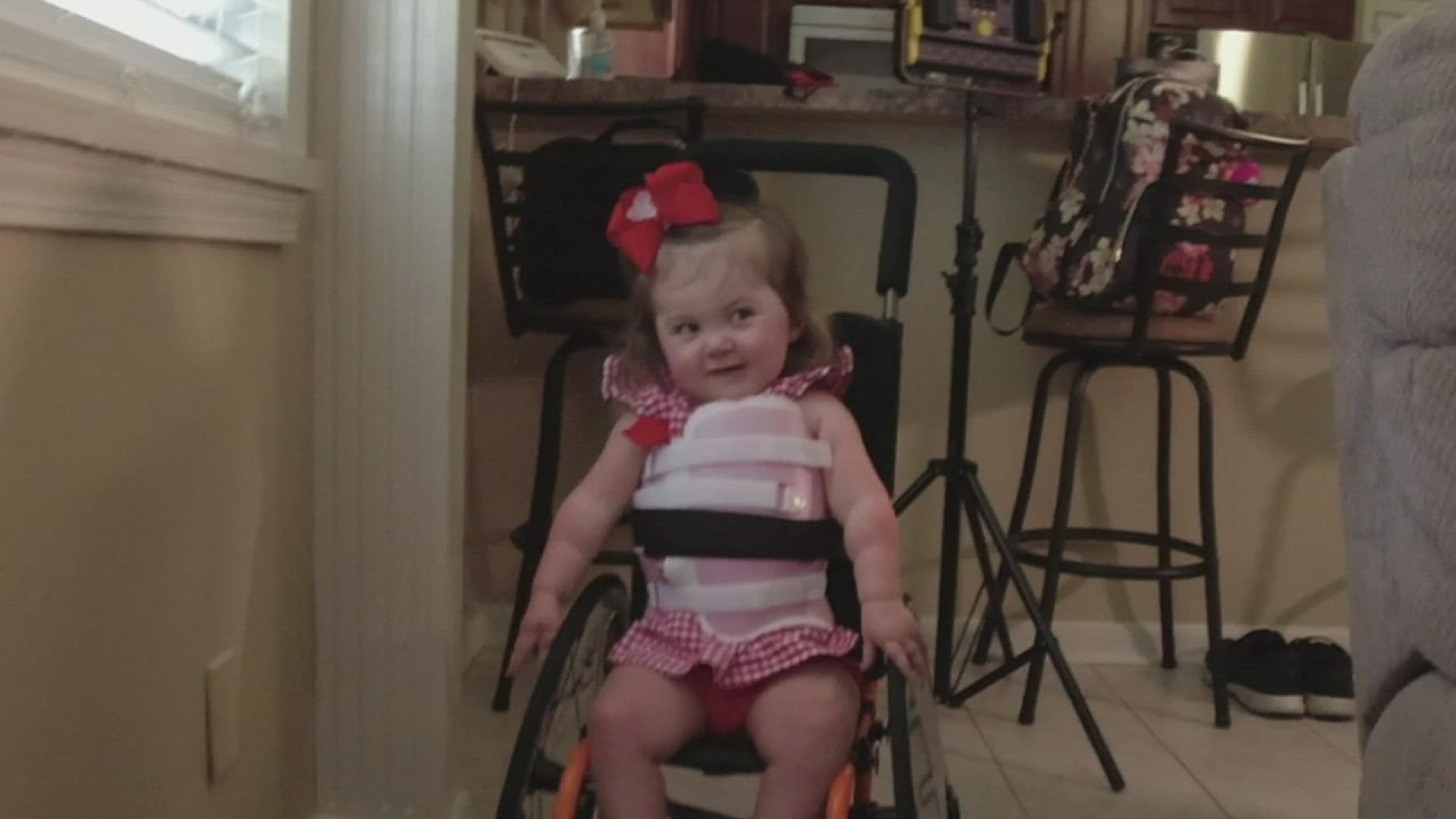 DESOTO COUNTY, Miss — Charleigh Jones is almost two-years-old. She can feed herself, eat fairly easily and roll over toward her favorite Minnie Mouse.

But not too long ago the most basic tasks were a challenge. Spinal muscular atrophy limited her movements.

“She finds ways to do different things,” said mom Lacey Jones. “Sometimes heavier toys are harder for her to pick up. While she’s rolling around on the floor she drags it across her body and moves it to the other side.”

And everyday wins are that much sweeter.

The Jones' dealt with infertility before their daughter was born. Doctors performed tests while Lacey was pregnant.

“Everything came back clean no sign of any genetic disease or anything like that,” said dad Charles Jones.

Charleigh seemed like she was born healthy and strong but a few weeks later they discovered something different.

Her parents call her their “one in 10,000 baby” since she was randomly selected to be screened with that number of newborns at Le Bonheur Children’s Hospital for SMA at 7 and a half weeks.

They got devastating news.

“Type one which is what Charleigh is they usually back in the past they would actually pass away before they were two years old,” said the toddler’s dad.

Mr. Jones quickly became knowledgeable about the disease learning what he could.

“Her body is lacking a gene that keeps her neurons alive,” said Charleigh’s dad. “So those neurons die over time and they don’t grow back.”

Every second counted when getting little Charleigh treated when she did it wasn’t a quick fix. She still sees a doctor almost daily.

“Even when she’s tired she just continues to keep going,” said mom.

And she doesn’t fade into the background either.

“She can be very boisterous, let’s you know she’s here and ready to do things,” said Mrs. Jones.

Working on a heartwarming story about one-year-old Charleigh, who overcomes a life-threatening disease daily. Plus she’s teaching her parents a lesson about compassion and determination. @LocalMemphis pic.twitter.com/EnmadKUapp

Charleigh’s SMA resulted in scoliosis and gravity makes it worse. She’s set to get surgery to correct it with magnetic rods in her spine, but therapy is first.

While Charleigh is still learning her animals, she’s teaching mom and dad about compassion.

“Her determination has taught me more than I ever thought possible,” said Mr. Jones.

Tennessee was not routinely screening for SMA while Charleigh was born.

Charles and Lacey found out they are both carriers of SMA and encourage parents to test for it and seek early treatment to help for their child.

To be one of Charleigh’s angels and help with the costs of her surgery, click here.