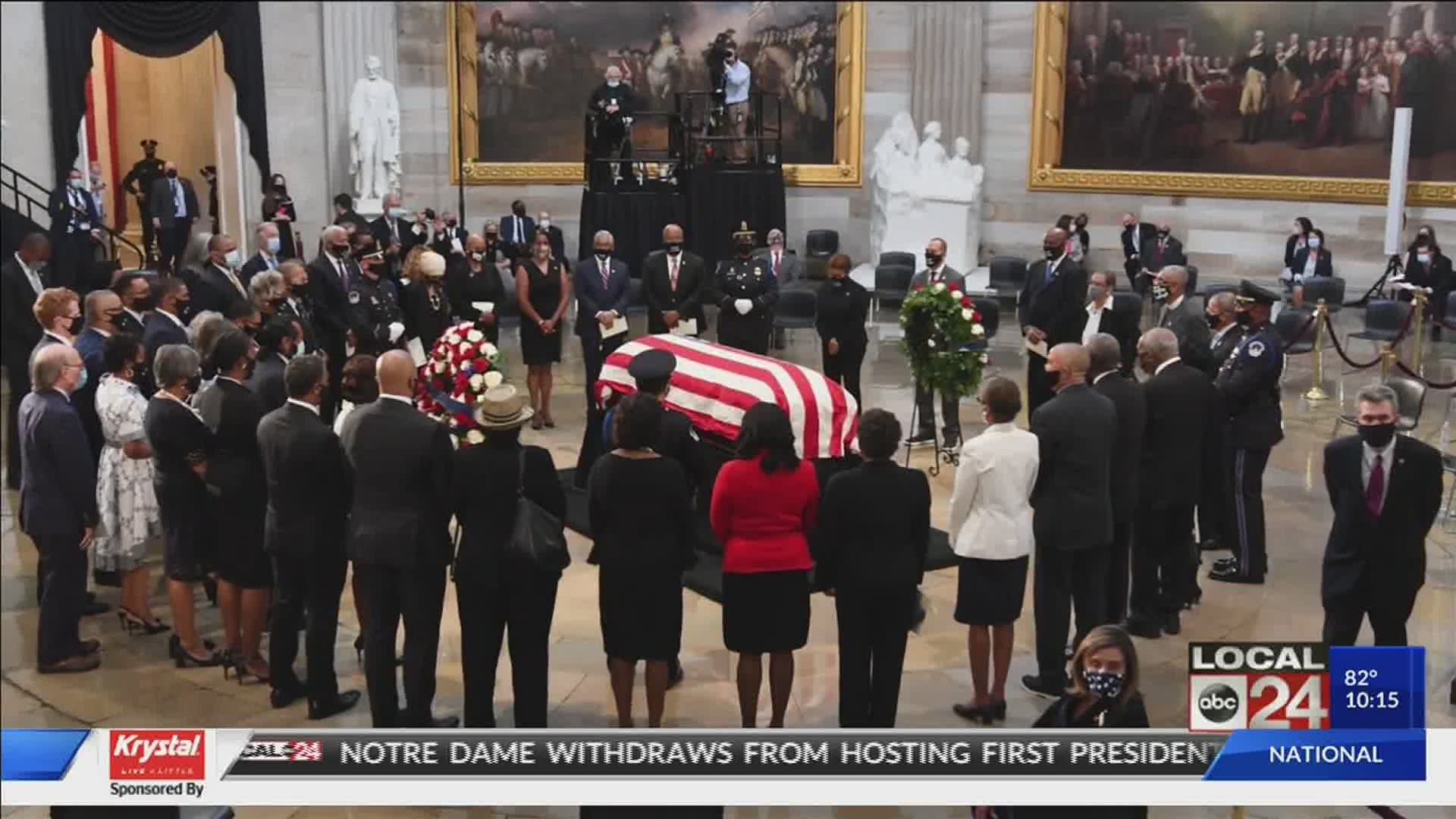 Congressman John Lewis, an icon of the civil rights movement, was laid in state in the Rotunda on Capitol Hill.

The 88-year-old is most remembered for images of him being beaten by Alabama state officers during a march for voting rights for African Americans, a cause for which he dedicated all of his life.

As Lewis was mourned by legislators of his own party and across the aisle, legislation was introduced to rename the Voting Rights Act in his honor. Lewis did lots of his work in Memphis.

Born in Troy, Alabama, in the segregated south, Lewis now lies in state in the Capitol Hill Rotunda, with family and bipartisan colleagues paying respects. Honoring Lewis' life's work securing the right to vote for Black Americans that almost cost his life.

He worked with Martin Luther King Jr. in the non-violent fight for racial justice. Described by many as humble and patient, Lewis never lost the common touch.

Author and Mississippian Duvalier Malone notes the flood of pictures on everybody's social media with Lewis just like his.

📸 People gather to pay their respects to late civil rights icon John Lewis, who is lying in state for public viewing at the U.S. Capitol. https://t.co/xdl4MWT3jY pic.twitter.com/Jj86Ll8oyi

"And that's just who he was. He stopped. He took photos with everyone. Imparted knowledge and wisdom," said Malone.

Malone first worked with Lewis in 2013 on a project associated with the 50th anniversary of the March on Washington starting a lasting friendship between the two men.

"Anytime I was on Capitol Hill I was just able to stop by the office. He would sit in and talk to us," said Malone.

Though I met Lewis many times, I have no pictures, but a friend who worked for the Congressman would hand Lewis the phone with me on the other end if Lewis was just passing by and he always offered an inspiring conversation.

RELATED: The late Rep. John Lewis will lie in state at the US Capitol

I would see Lewis for the last time in 2018 on his annual pilgrimage through Memphis on the Civil Rights Trail at the National Civil Rights Movement and remembered him in early 2019 on one of my visits to Washington, D.C. at the new National Museum of African American History and Culture a place he worked tirelessly to see built.

Even with the selfies and memorial services. Malone says the best way to honor the life of Lewis is to vote.

"It is imperative that if we're going to continue the legacy of Congressman John Lewis is to ensure that we understand the blood that was shared for the right to vote and for us to get out and to vote," said Malone.