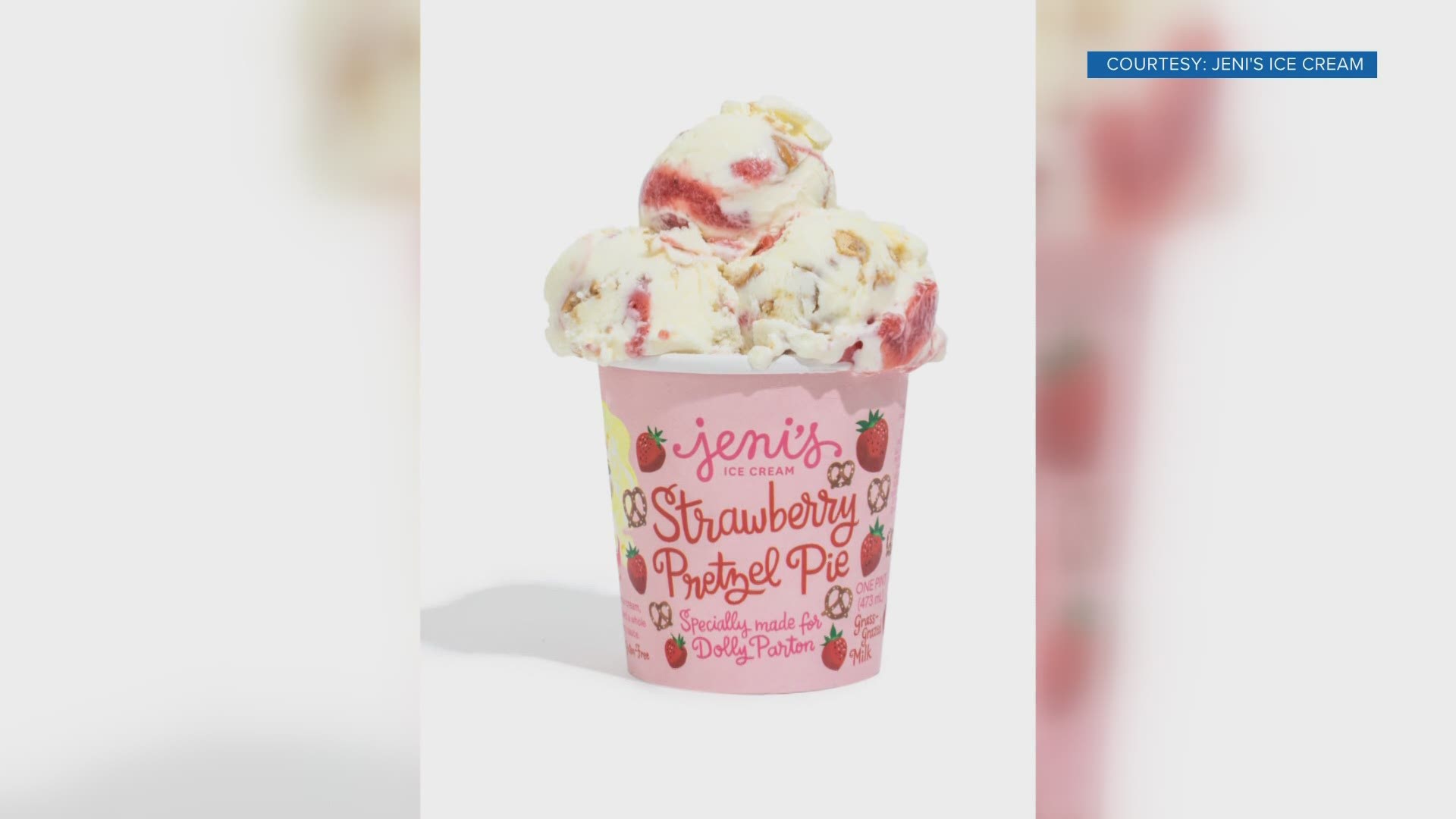 KNOXVILLE, Tenn. — Jeni's Ice Cream quickly sold our of its first batch of Dolly-inspired ice cream after the limited-time sale broke the internet last week, but don't lose hope: There will be one more chance to get some later Thursday afternoon!

In roughly 6 minutes, people bought up the remaining 5,000 pints of the first batch. So many people tried to buy the ice cream from Jeni's last week that it crashed the company's website during the launch -- leaving those pints unsold.

The company said it felt pretty bad about the technical issues, so it's going to also take pre-orders for a second batch of 15,000 additional pints at 3 p.m. Thursday of the limited-edition Strawberry Pretzel Pie flavor.

On April 15, they announced that limited-edition was also sold out.

Thank you for making our @DollyParton collab an unstoppable force for good and supporting @dollyslibrary. Someday, someone will write a country song about the ice cream that broke the internet. pic.twitter.com/jB7IBEcjRy

The pre-ordered pints will ship at a much later date. Jeni's said it will take time to make the new batch because some of the ingredients are custom-made and hard to find, so it expects shipping will begin in August for those who pre-order.

You can learn more and place your orders when they go live by clicking this link.

The limited-edition Strawberry Pretzel Pie flavor initially went on sale last week at noon on Thursday, April 9. But it didn't go as smoothly as planned.

Then, just after 3 p.m., Jeni's posted it was still having issues with the website and that the flavor was not sold out.

To those of you trying to order Strawberry Pretzel Pie online, we are so sorry. This sucks. The flavor is NOT sold out. Our website issues have lasted longer than expected, but we are working on it and will let you know via email and social media when we’re back up and running.

A spokeswoman said Thursday the flavor was not sold out online, "but we’re still working through the website issues and will let everyone know via social media and email when it's available again. We realize our customers are disappointed and we’re so sorry that this was a frustrating experience."

Jeni's said the website got 50 times more users than normal when the flavor was released, and while the company thought the site could handle the extra traffic, it shut down.

The flavor is not available at local retailers, only online and in Jeni's scoop shops.

Jeni's Ice Cream has teamed up with Dolly Parton for a brand new but limited edition ice cream flavor. If that's not sweet enough, the proceeds from the ice cream will go to Dolly's Imagination Library!

"Dolly Parton is the person we all want to be when we grow up: An unstoppable force for good with the power to bring people together. Strawberry Pretzel Pie is our ode to the Queen of Country and a throwback to the triple decker pie from the potlucks of our youths," said the brand on its website.

So what makes up this flavorful tribute to Dolly? The ice cream will include layers of salty pretzel streusel, cream cheese ice cream, and lipstick red strawberry sauce.

The new flavor will be available to order online at noon on April 8. There will be a limit of two pints per purchase.

Jeni's, an artisan brand based in Ohio,only made about 10,000 pints, and they expect them to sell very fast.

Dolly Parton's Imagination Library has give more than 150 million books to children all over the world--- for free!