Are you legally required to show your receipt when leaving a Walmart? | VERIFY

FOLSOM, Calif. — If you’ve noticed some Walmarts in the area have started scanning your receipts when you leave, you’re not alone. The policy has go... 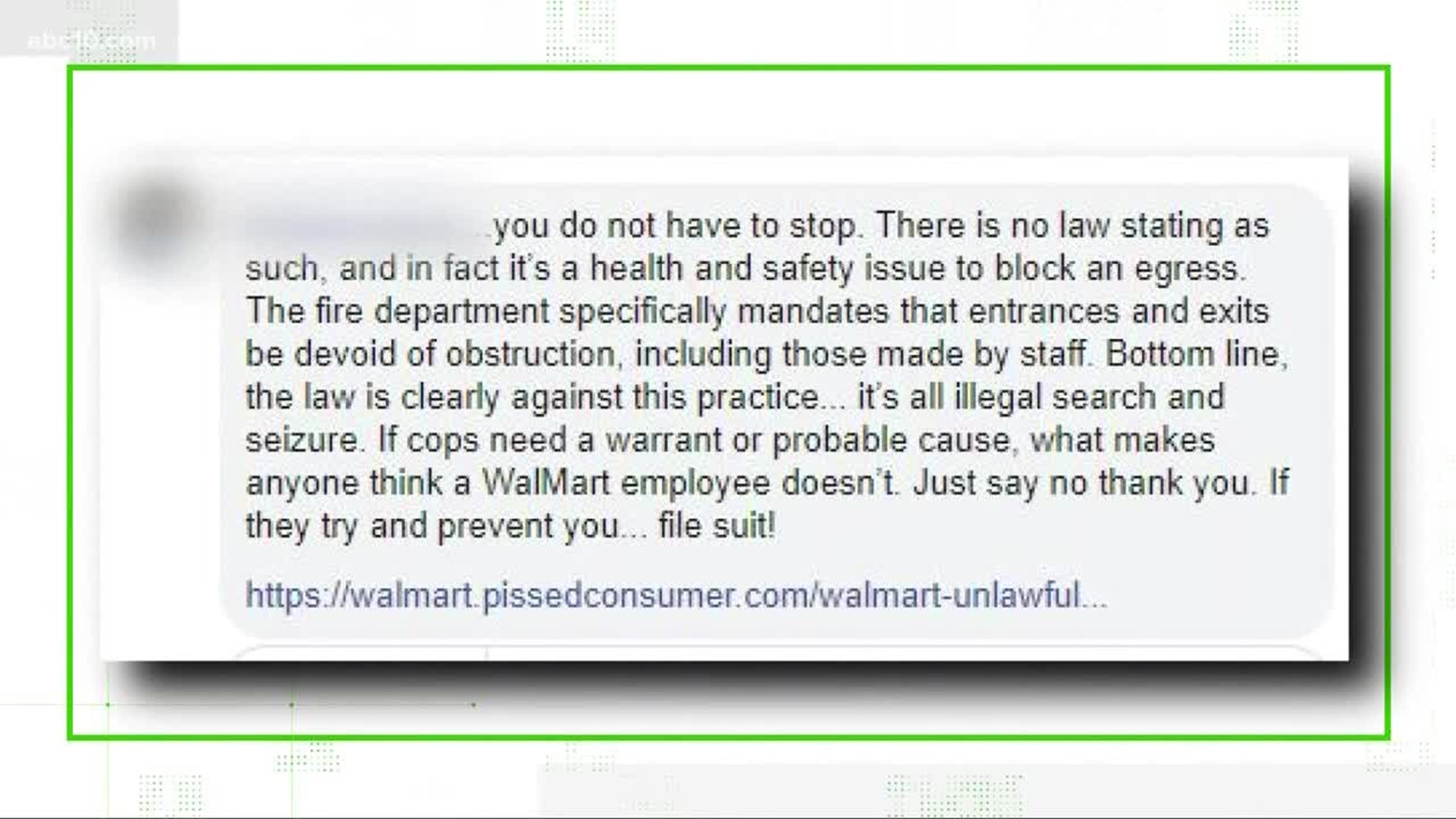 FOLSOM, Calif. — If you’ve noticed some Walmarts in the area have started scanning your receipts when you leave, you’re not alone.

The policy has gotten many people talking on Facebook, with some saying it’s no big deal and others expressing concern. One person had a different kind of comment.

“You do not have to stop,” he wrote. “There is no law stating as such.”

So, is that true? Can you legally just not stop and show your receipt at a Walmart checkpoint?

To start, we can say that this is happening at the Folsom Walmart and others in the area. Not only did Walmart confirm it, but our ABC10 team went by the store and saw it happening.

Most people got stopped, but not everybody. That’s what seemed to bother Carmen Ellis the most — a customer who said she had recently been stopped and checked, while a few minutes later, her husband was not.

“It’s almost like you’re singling me out for the receipt. Do I look like a thief or what?” Ellis said. “I was kind of questioning it because, you know, my husband is white, and I’m a Hispanic.”

What Walmart is saying: A Walmart spokesperson told us that “our intent is to check every receipt.” He said, ultimately, this policy is to help prevent theft, which helps keep inventory high and prices low thus keeping customers happy.

But are you legally required to engage?

What Folsom PD said: Sgt. Andrew Bates with the Folsom Police Department  directed us to California Penal code 490.5, which states:

In short: “To answer your question,” Bates said. “A person would not have to stop unless the merchant had probable cause to believe the person had taken merchandise without paying.”

VERIFY: Knowing that, we can verify that it’s TRUE. You are not legally required to stop and show your receipt at a Walmart if you do not want to.

That said, it’s not so simple.

We spoke to a lawyer, who has represented clients in these kinds of cases, who said that while there is no provision in the law that requires you to stop, not stopping could give the store some probable cause they need to ask you to stop and detain you. They would need additional proof, too. At that point, lawyers advise it’s best to show your receipt and wait it out. Don’t try to flee.

And what about Costco? Things are little different with Costco, since it’s a membership program. If you shop there, you’ve signed on to their terms, which means, yes, you are required to stop and show your receipt. They also make a policy of checking every customers’ receipts.