The Tennessee Real Estate Commission says Management That Cares has been fined almost $20,000 for operating without a license. 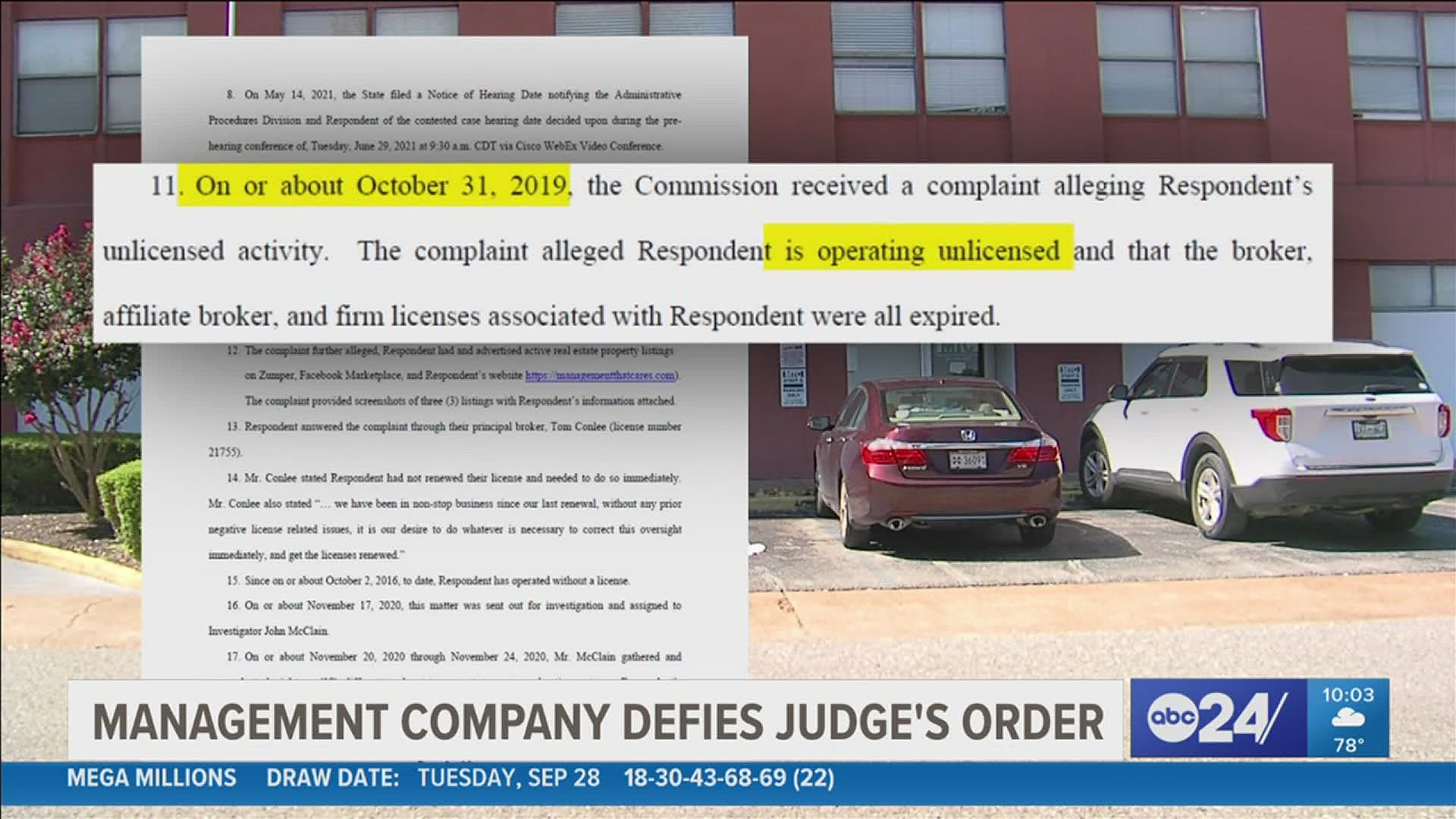 MEMPHIS, Tenn. — According to the state of Tennessee, Memphis Property Management Company, Management That Cares has not had a valid Real Estate Broker License since 2016 but it's still been doing business in Memphis. Almost two months after a judge ordered Management That Cares to stop operating, one Cordova couple wants to know why they've been ordered to move out.

Buying a new home? TN Real Estate Commission Executive Director Caitlin Maxwell: If you are working with someone who holds themselves out as a licensed real estate agent, you should verify that they actually have an active real estate license. #RealEstate https://t.co/cU79Gl497v pic.twitter.com/A2FFvIavWm

Chris Cicero said he and his girlfriend were sent a letter claiming they disturbed the peace and giving them three days to move out of their rental home or face legal action.

"I don’t understand why any of this is happening at all," said Cicero.

According to a March 2020 Tennessee Real Estate Commission meeting, the company had been notified in 2019 they had not renewed their license and the owner said they would do so immediately, and as of the 2020 meeting they had not done that.

"Why don't we just shut them down," said one board member on the meeting video. Another board member replied, "Yeah, and revoke them."

A third board member said on the meeting video,  "Why have we not turned this over to the DA or whoever? Can we refer it to the district attorney's office? "

The board voted to fine the company and refer the matter to the District Attorney and begin an investigation into to of the company's unlicensed agents.

RELATED: BBB Warns Of Timeshare Scam Out Of Jackson, Tennessee

ABC24 asked Tom Conlee, owner of Management That Cares, about the letter they center to Chris Cicero.

"We have been licensed and working in real estate since 1978. A few years back, we relocated our offices and thereafter never received our license renewal notice from the state. We just overlooked it’s expiration until it was brought to our attention a few months back. A fine was assessed which we appealed, and a hearing was held, and the fine confirmed. We have now submitted payment for that fine to the state, in full, after which, they will have the license reinstated. This should fully address our oversight."

The fine was paid Tuesday, September 28, 2021 but the The Tennessee Real Estate Commission said it is not that simple.

Here is the statement sent from the TREC spokesperson Tuesday morning:

"Obviously this company is not respecting the rules," said Michael Working, Cicero's lawyer.

Working said his client can't be evicted from a company that shouldn't be operating.

"Management That Cares is really management that does not care and I have no problem saying that," said Cicero.

According to a spokesperson for the Tennessee Department of Commerce and Insurance, the state had no real response from Management That Cares until last week when the owner learned ABC24 was working on this story.

If you want to check if a realtor or property management company is licensed and legitimate you can look up all types of state licenses easily online here: https://verify.tn.gov/

You can also file complaints against companies or individuals here.