I-40 bridge closure, plus coastal shipping delays, could affect your wallet

30% of the traffic that crosses the I-40 Hernando de Soto bridge in Memphis are commercial trucks. 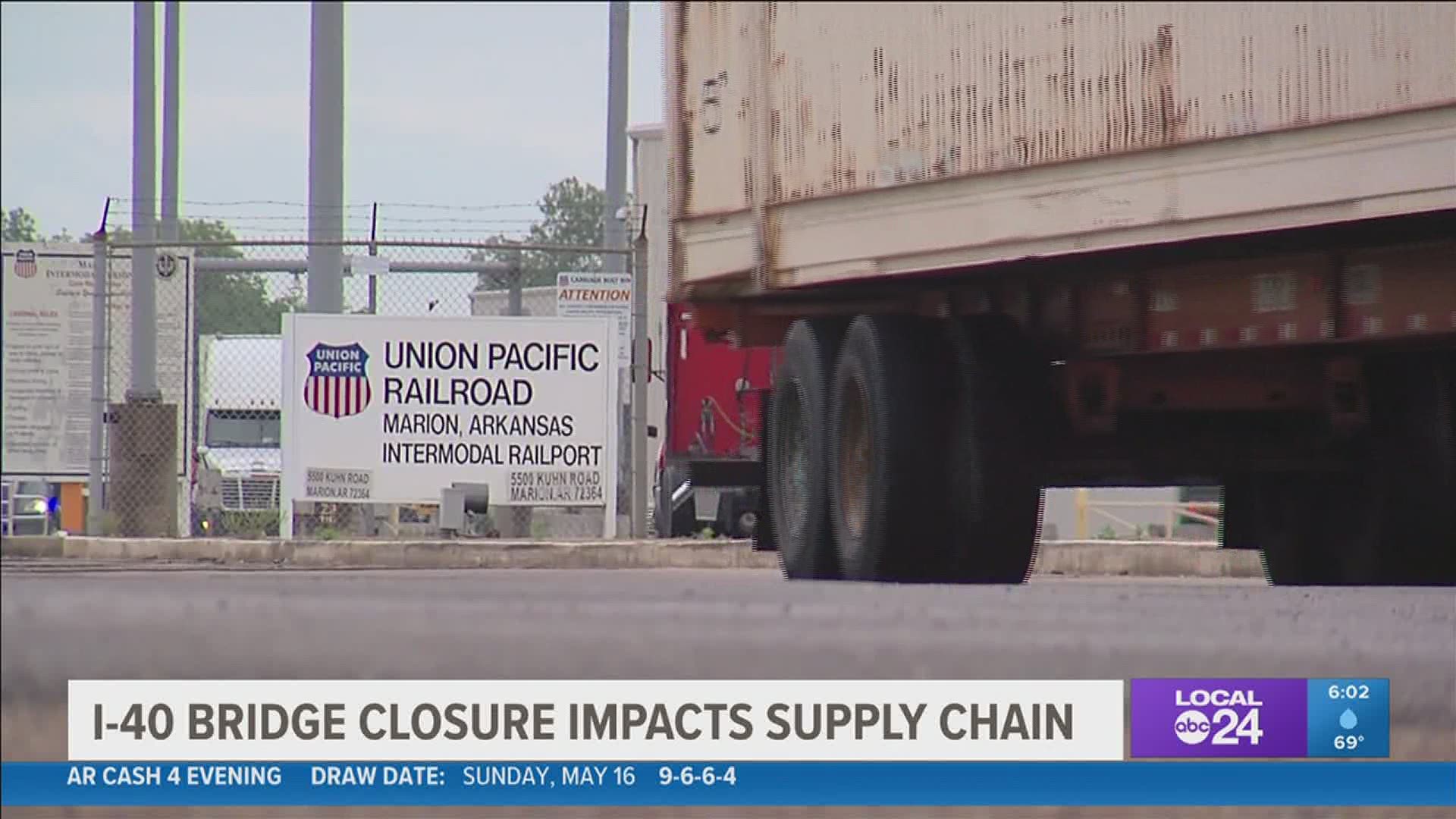 MEMPHIS, Tenn. — The longer the I-40 Hernando de Soto bridge is shut down, the bigger the problem for the supply chain, said logistics experts.

It's not only affecting how things move across the country and across our region, but experts said it could end up impacting your bottom line.

Every day the Hernando de Soto bridge is closed, it's estimated to cost the trucking industry $2.4 million a day in additional transit time.

"The traffic is very slow but it is what it is," says truck driver Charles Lowery.

While the bridge closure is making it difficult for long haul trucks, logistics experts said it's the local truckers who are feeling the real pain.

For example, at the Union Pacific Railroad facility in Marion, Arkansas, every day product arrives by train from the West Coast. But moving it from the facility is the problem, said experts.

Local drivers previously made several trips each day to pick up and drop off containers. Now that only one of the two bridges crossing over the Mississippi is open, they aren't able to make as many trips.

Daniel Booth is president of the Memphis World Trade Club, which is a professional organization for those in the international trade industry.

"If they are doubling their time to pick up from the Marion ramp and return it to the Memphis area, than they are essentially cutting down their volume and revenues," said Booth.

Logistics experts said it's causing missed rail pick up and drop off appointment times, because truckers have to take alternative routes or can't make as many trips. Which means shipping may have to be rebooked.

In addition to imports coming to Memphis, it's also expected to have an effect on export bookings leaving out of Memphis.

So what does all this mean for you?

"I’m sure most of your viewers can see there are a lot of different shortages of many products and materials right now, and it’s only going to lead to more delays - and certain which will lead to a rise in prices," said Booth.

Because of problems getting cargo moved inland from the west coast and bottlenecking in the system, freight costs have skyrocketed, said Booth.

Booth said the additional cost connected to the bridge problem is small compared to the costs associated with overseas importing.

Mallory Alexander, an international logistics group, posted a release on its website saying the bridge closure is leading to a disruption to the supply chain.

Booth hopes the Hernando de Soto bridge reopens sooner rather than later, and is hopeful this situation will be resolved - one way or another.

"One thing I am confident of is the Memphis logistics community as a whole. There is a lot of bright people and we are going to get through this - work through it together," he said.

Union Pacific released a statement saying: "The closure of the I-40 bridge at Memphis has created travel complications for our train crews being transported to and from their trains at our Marion terminal. We’re doing everything we can to assist our crews in navigating the traffic delays, while ensuring that the bridge closure does not impact our customers or the movement of our trains."