'This is scary' | Weekly unemployment claims skyrocket in Tennessee 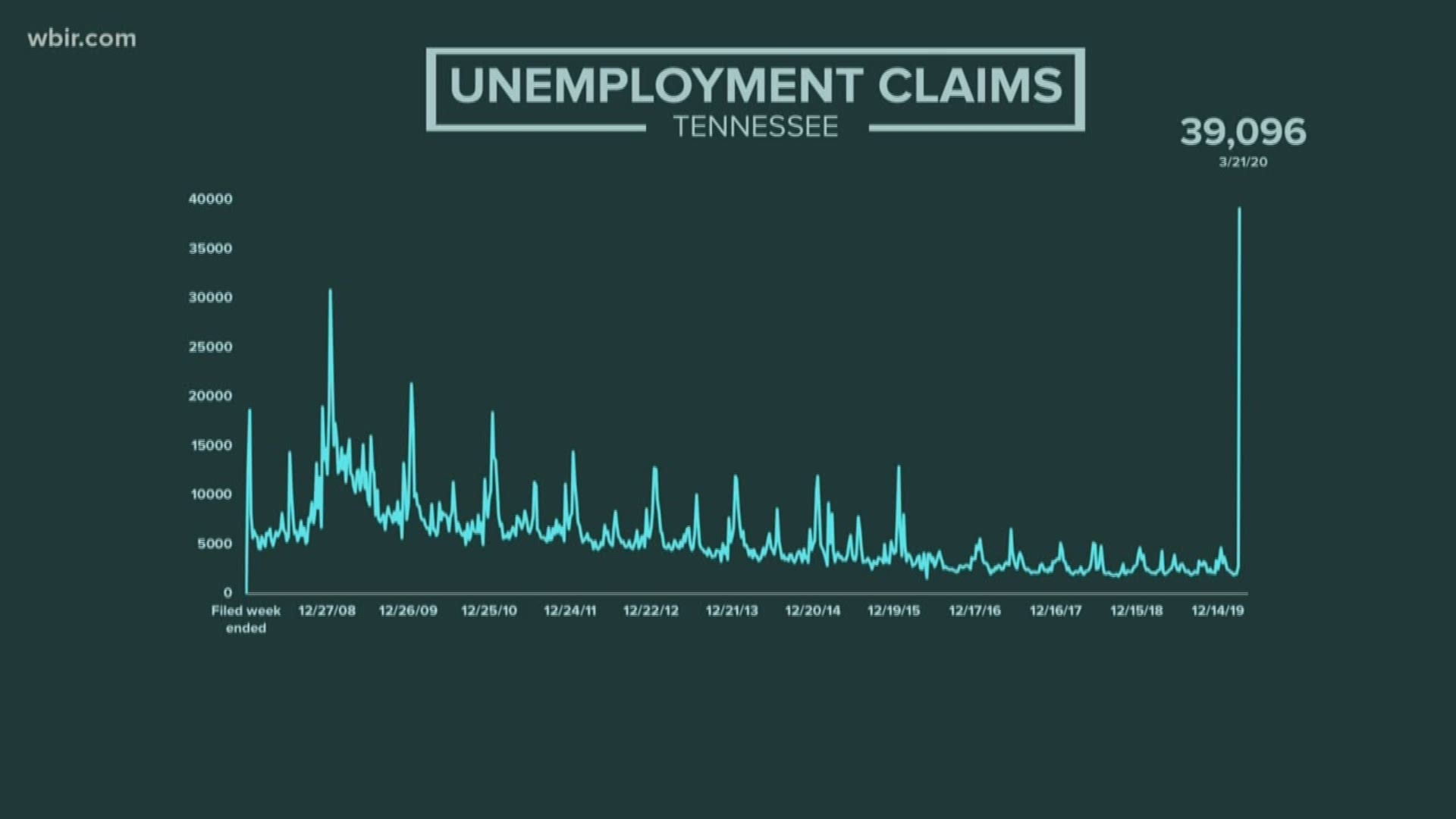 For the week ending March 21, 2020, 39,096 initial claims for unemployment benefits were filed. That's up from 2,702 filed the week before, according to the Tennessee Department of Labor and Workforce Development.

The state calls the jump "unprecedented."

According to data from the U.S. Department of Labor, it's the largest number of new claims in a single week since 52,529 claims were filed the week ending on Jan. 11,1992.

The most claims filed during any given week during the last recession was 30,914.

RELATED: $2 trillion coronavirus deal: Who will get stimulus checks and when?

"The latest figure represents a nearly 20-fold increase in week-to-week claims," according to a release from the department.

State and local leaders have called on non-essential businesses to close to help curtail the potential spread of the highly contagious virus. The state is continuing to see the count of positive cases rise as more testing data come in.

For Whitney Scott, a bartender and bar manager in Downtown Knoxville, both of her jobs closed indefinitely on March 15.

"[They] decided to close since it'd be best for our community just because we see so many people in a given day," Scott said. "This is scary. This is something we've never really seen before."

Scott filed for unemployment benefits on Wednesday because she doesn't know when she'll be able to go back to work.

"[That] was kind of crazy. I've never had to do that before," Scott said. "I just hope we can be kind to one another and know we're not alone."

"Continued spiking of initial claims will become a financial issue," Fox said. "I worry about states', including Tennessee's, ability to fund the government. Tax revenues will plummet or they've already started to slow."

Fox said he expects there to be a recession in the second quarter because so few businesses are open.

RELATED: Looking for a job? These businesses are hiring plus the state wants to help you find work

"We're three or four weeks into the quarter before the best case, we start operating, so clearly the second quarter will be negative," he said. "The longer we prolong the slowdown in economic activity, the worse it is for all of us."

Limiting social interaction is one key way to stop the spread of the virus, according to health care professionals.

But widespread business closures are also throwing people out of work.

Nationwide, Americans filed 3.28 million new unemployment claims, an increase of 3 million from the previous week's revised national level, according to the state.

You can file for unemployment online by going here.

The state on Thursday also launched a separate program that makes money available to needy families for a limited time. You can learn more about that here.

The state says it's working as fast as it can to process unemployment claims, but it's not an instantaneous procedure. Also, recipients need to remember there's a limit on how much you can get -- and it represents only a portion of your prior earnings.

For example, the maximum weekly unemployment benefit in Tennessee is $275 before the deduction of federal taxes.

The money can be directly deposited into a claimant's bank account or they can get a debit card.

The department has shifted some of its staff over to help review the online claims for benefits.

"The department is currently expanding capacity and exploring other methods to increase its workforce," according to Thursday's announcement.