Equal Pay Day: Where we’re at and working to close the gap

KGW sits down with two local women to talk about the gender pay gap and small steps to take toward fixing this big issue. 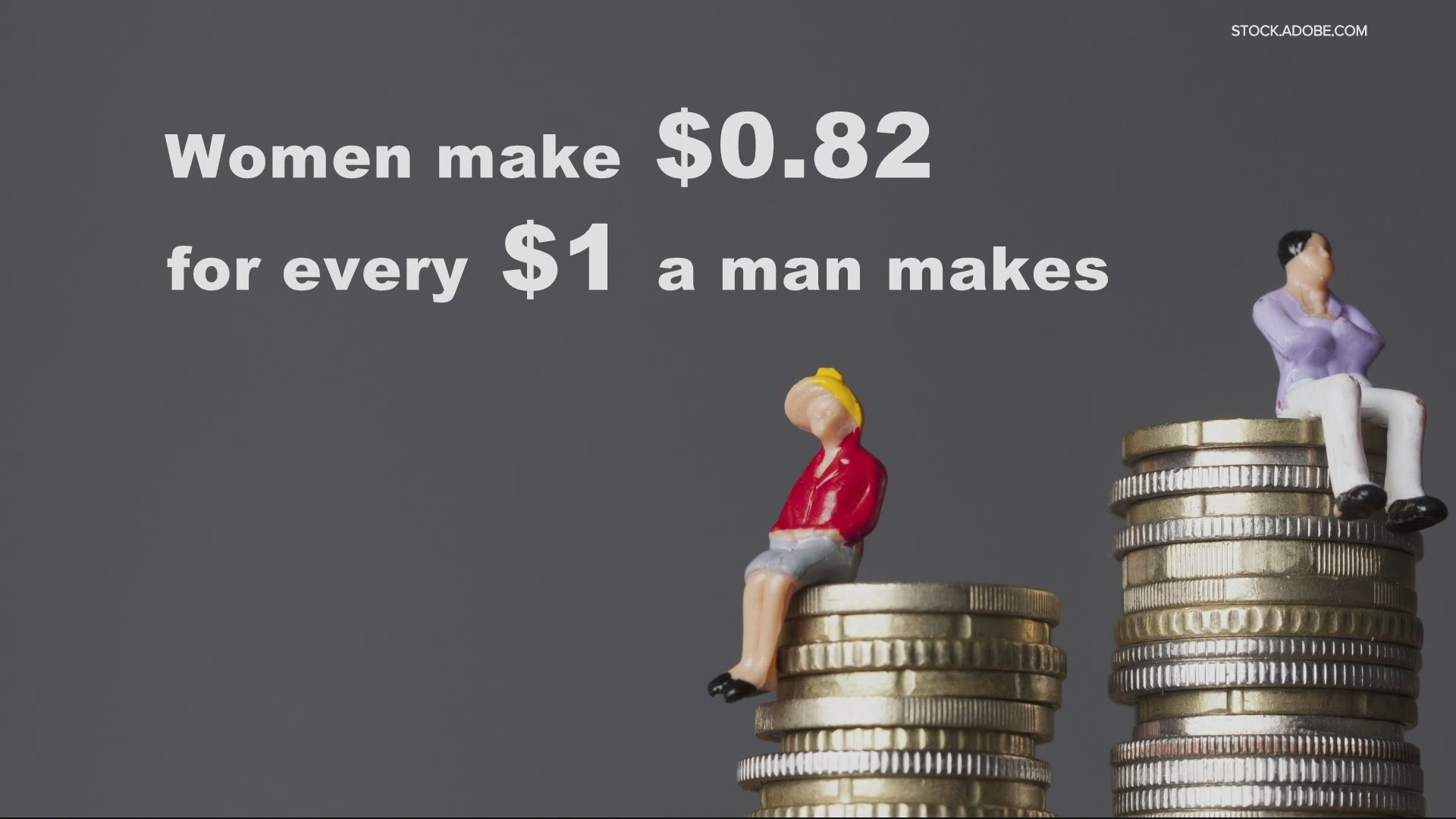 PORTLAND, Ore. — March 24, 2021, is Equal Pay Day. It’s a day many people use to bring awareness to the gender pay gap. It also symbolizes how far into the new year women must work to be paid what men were paid the previous year.

The power of women has been on full display for Women’s History Month, but it's hard to smash that glass ceiling while women are making about 18 percent less than men.

“At the rate, we’re going it’s going to take about 257 years to catch up with men. So, I think we should really pick up the pace on this one,” Northwestern Mutual Wealth Management Advisor Charlene Quaresma said.

So, let’s talk about the Gender Pay Gap: The latest data shows women make .82 cents to every dollar a man makes, according to PayScale.

“The impact is huge,” Quaresma.

KGW’s Brittany Falkers sat down with Quaresma and her client Michelle Battista to talk about equity in the workplace and how we can level the playing field.

“Oh boy, are you ready? I hope everyone’s sitting down for this one. Not only are women taking home less, they have to do more with less,” Quaresma said.

Battista is a single mom who co-owns an event space called the Night Wood Society. Years ago, she was compelled to become her own boss after an experience that probably sounds familiar to many women.

She worked at a big corporation and was a shoo-in for a promotion. It was a job that she had been working toward.

“I came in one day and found out that the job had been given to someone else. And it happened to be a man that was new to the company,” Battista said. “You’re like, ‘Oh, it’s always going to be that way here. I’m not going to wait for it to change here. I’m going to make change for myself.'”

Now, she’s made empowering other women part of her life’s mission. Along the way, she’s relied on other women to help. Women like Quaresma.

“It’s really important to me because I just always feel that just because the cards may be stacked against you doesn’t mean that you can’t be a better poker player,” Quaresma said.

When looking at the gender pay gap, it’s important to take a deeper look at the numbers. When you hear the statistic that women make 82 cents on the dollar compared to men, that’s for white women.

According to the latest data available from the American Association of University Women, Asian American and Pacific Islander Women make 85 cents for every dollar paid to a white man. For Black women it’s .70 cents, Native American women .60 cents, and for Hispanic women it’s just .55 cents.

“There’s systemic racism, systemic sexist, systemic ageism,” Battista said. “And if you are a Black woman and you’re over 55 years old, you add all those isms and your pay gap just continues to increase.”

“That means that Latina women have to work almost an entire year to make what a man does [in half a year],” Quaresma said. “And that’s insane.”

The gender pay gap shrunk by 1% in 2021. However, researchers say we can't necessarily take this improvement at face value. That drop could be attributed to lower-paid women leaving the workforce because of layoffs or family care.

The impact of the pay gap goes beyond the number on your paycheck. It adds up over time.

Even a matter of being pennies short of a dollar can amount to tens or hundreds of thousands of dollars over the course of a 40-year career. For women in some racial-ethnic groups, catching up to men’s earnings would mean working an additional two years or more, according to PayScale.

The average amount of money earned by women throughout their career is $850,000 less than that of men. In the controlled group, measuring median salary for men and women with the same job and qualifications, it is $80,000 less.

Women with the same job title and qualifications as a man, making a median annual salary of $61,000 in 2021, would need to work more than a year longer to earn the same as a man, according to PayScale research.

So, what can women do, in their own lives, to get a leg up in a system that's stacked against them?

“I think having a plan is really important, getting really clear on what it takes to be you on a monthly basis. What is the excess and then how can we start putting some of those dollars away? That's the first thing,” Quaresma said.

Next, be your own advocate.

“I think that’s really important because, women, we sometimes think if we continue to work harder and harder people will notice. They don’t,” Quaresma said.

Quaresma recommends you document everything. Push for that raise and if your boss says no, ask what needs to happen to get there. Then, write it down.

“But this is also a catch 22 because I don’t want to send the message that it’s just about women beating the drum over and over. It’s exhausting and it’s really not our job,” Battista said. “We’re constantly fighting for something that should be our employer’s job. So, really pushing for policy change, pushing for employers to be transparent.”

Finally, share your experiences. Normalize talking about finances, help educate yourself and others, and encourage others to be part of the solution.

“Come together with other women, talk about what you make. Talk about your own challenges and help other people advocate for themselves,” Battista said.

For more information and tips on how to advocate for yourself visit payscale.com and aauw.org.