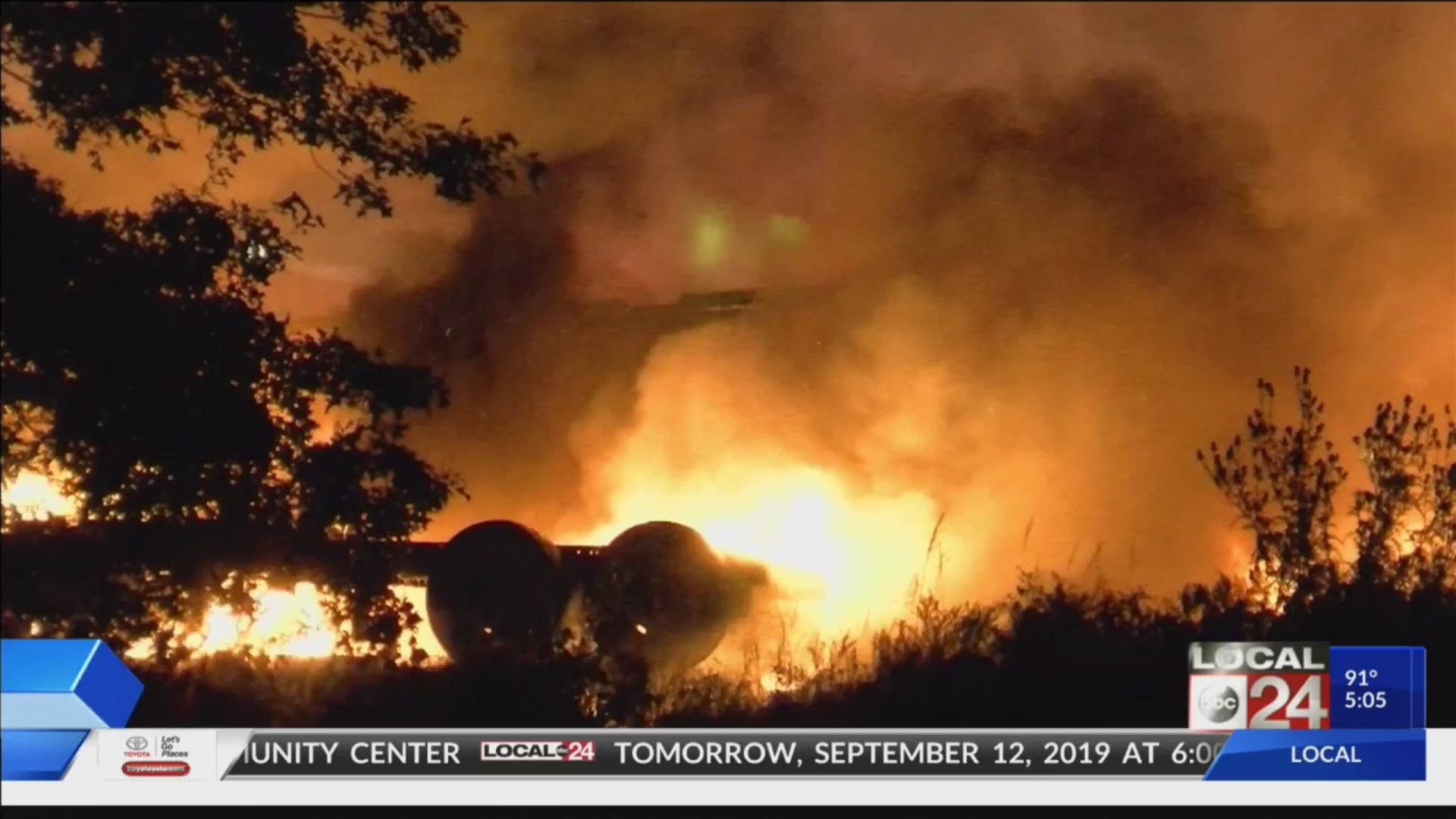 TOLEDO, Ohio (localmemphis.com) – A cargo plane that made a brief stop in Memphis Tuesday night, crashed early Wednesday morning, just before 3:00 a.m. eastern, near the Toledo Express Airport, killing the two people on board.

According to a Toledo Port Authority official the plane wentdown on approach, just east of the airport at an auto repair business, hittingseveral unoccupied vehicles and causing a significant fire. According to theAssociated Press, the plane went down at a business property filled with truckcabs and trailers while no one was there and missed the nearby Ohio Turnpike.

The Port Authority tells Local 24 News, there is a secondary search of the area due to wreckage being scattered at the business. Crews on the scene say, the plane was a conveyor cargo plane hauling auto parts. 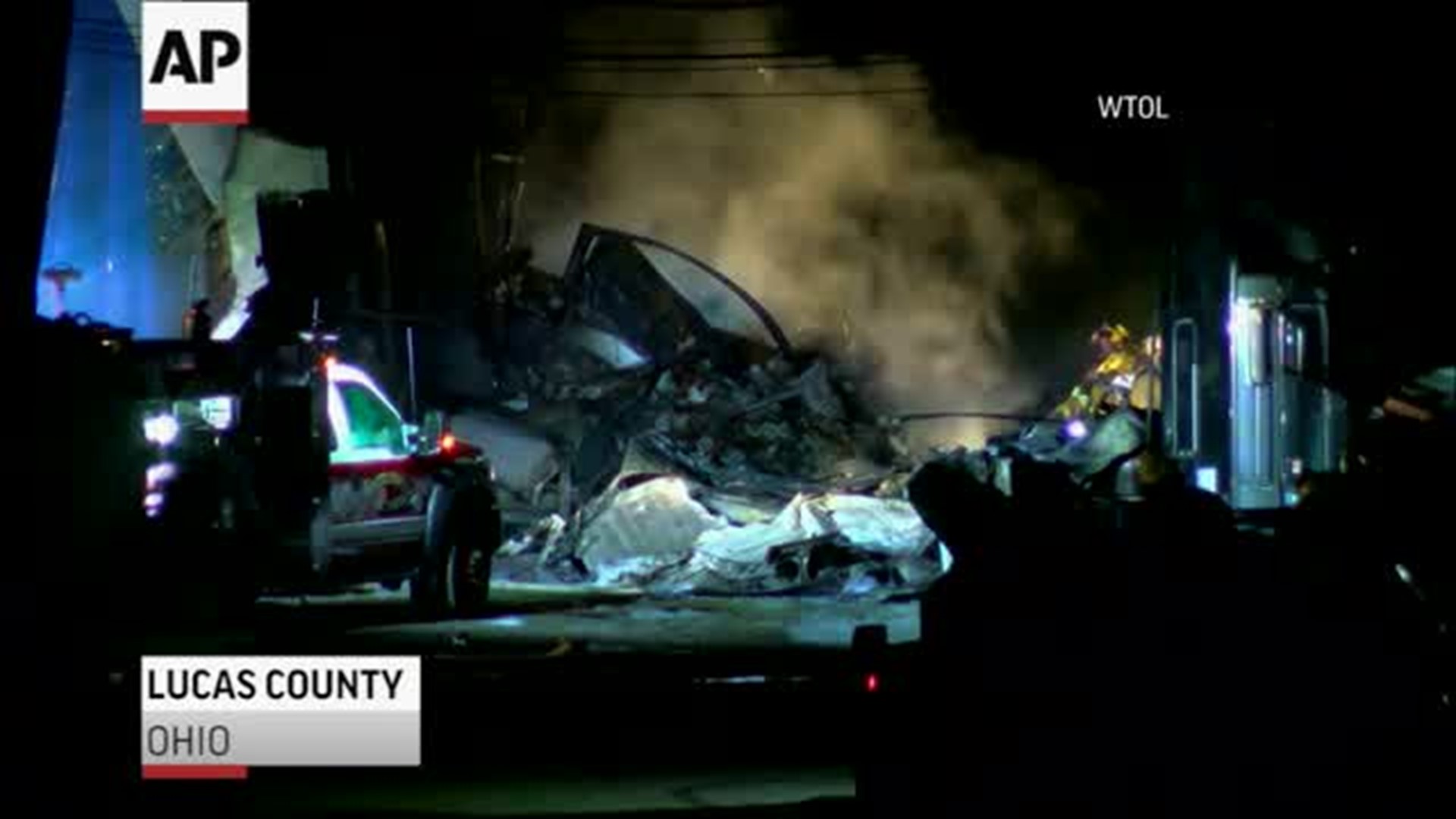 “We got very lucky where it happened,” said Brian Rozick, the fire chief at the Ohio Air National Guard base at the airport.

He said they had no advance warning of a problem and they were notified about the crash by the airport control tower.

The port authority’s manager of airline affairs, Joe Rotterdam, said officials couldn’t yet confirm whether any distress call was made from the aircraft. Rotterdam said it’s not clear if there is a so-called black box with recorded data about the flight.

We can confirm the Convair 440 cargo plane that crashed E. of #Toledo arrived at @MillingtonAirpt at 10:10 PM and departed to @TOLAirport at 11:13 PM with 2 crew onboard. @OHNationalGuard has confirmed there are no survivors. Our hearts go out to the affected family members. pic.twitter.com/qESo3TR8by

According to FlightAware, the plane, N24DR, is registered in Laredo, Texas. The plane, a Convair CV-440, was owned by Barker Aeromotive, Inc. Crew members were identified as Douglas R. Taylor, 72, and Donald C. Peterson Sr., 69, both of Laredo, Texas.

The Federal Aviation Administration and the Ohio StateHighway Patrol were helping with the investigation.

The Ohio State Highway Patrol is investigating a cargo plane crash in Springfield Township in Lucas County. The plane had two people on board at the time of the crash and both were pronounced deceased at the scene. No other injuries on the ground have been reported.

At 2:44 a.m., the Patrol was notified of vehicles on fire near Interstate 80, in close proximity to Toledo Express Airport. Troopers from the Toledo Post arrived on scene and reported a plane crashed near 10101 Garden Road, the site of a trucking business.

The plane, a Convair CV-440, was owned by Barker Aeromotive, Inc., and was loaded with automotive parts. Troopers worked with law enforcement officials in Texas notify next of kin. Crew members were identified as Douglas R. Taylor, 72, and Donald C. Peterson Sr., 69, both of Laredo, Texas.

The National Transportation Safety Board has been notified and will be on scene later this afternoon.