Meet the man who's bringing a grocery store to the food desert in Marks, Mississippi

"I think I was meant to do this," said James Jeffcoat, who owns Jeffcoat Family Market in Tunica. And now he owns one in Marks, Mississippi. 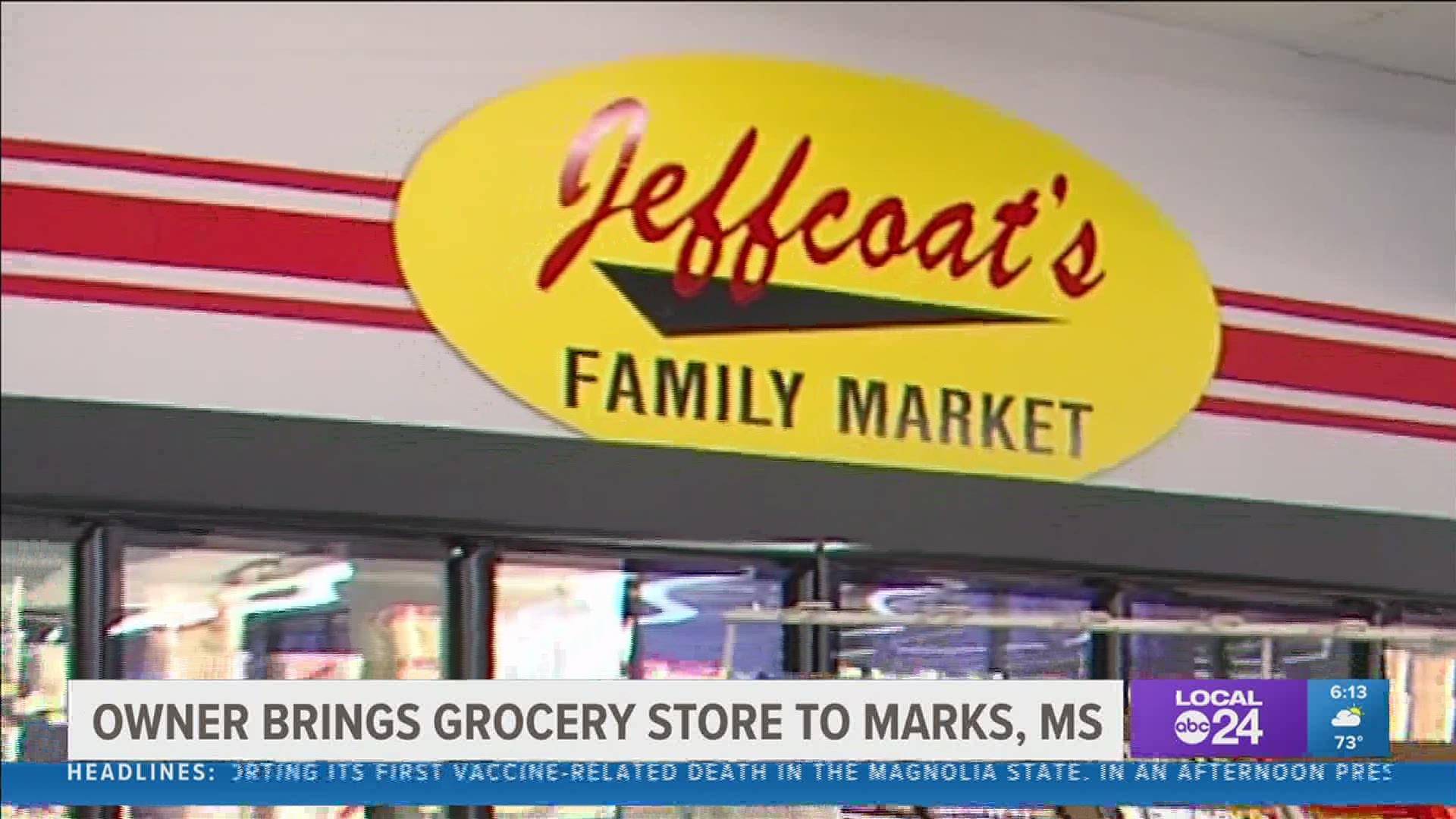 MARKS, Miss — We're taking this Tuesday's local good news to spotlight someone who answered the call to help his neighbors in need. Although he did not want to talk on camera because he said he didn't need any recognition, he finally agreed.

James Jeffcoat was raised in the Mississippi Delta, graduated from Greenville High School and worked in Indianola for thirty-five (35) years. His career: the food industry. Later, he opened a grocery store in Tunica, Mississippi. He's been there for ten (10) years. And now, Jeffcoat has answered the call to do the same in Marks, Mississippi, where residents had been without a full-service grocery store for years.

Jeffcoat owns Jeffcoat Family Market in Tunica. And now one in Marks, Mississippi.

"I think I was meant to do this," he said - meant to open the grocery store in the small Mississippi town where the entire county was a food desert for almost four years.

"When I first came here, I figured out I'd be the only grocery store in the town of course. I didn't realize I was going to be the only one in the county," said Jeffcoat.

Jeffcoat had been asked to come to Marks a few times before, but after doing research had second thoughts, a couple of times.

"There were a couple of retailers ahead of me that didn't do real well," said Jeffcoat.

While trying to decide if he wanted to open the store, he happened to watch Local 24 News’ documentary: The Mule Train: Poor People's Campaign Continued Weeknight Anchor Katina Rankin produced along with Videographer Nicki Storey.

"When I saw the documentary, I said, 'Hey, they really need a grocery store. People don't want to drive to Batesville or Clarksdale'," said Jeffcoat. "Some people have to literally pay someone to take them, and it's really inconvenient for me to come up to a neighbor, a relative and say, 'Would you take me to get some groceries?' I understood then it was very important."

So Jeffcoat went to work. Not only did he decide to open the grocery store, but he also made it twice the size of his first one.

"I'm not gone step backwards because they say, 'It's just Marks'. No. No. I wanted something the people can be proud of and they deserve it," said Jeffcoat.

He's generally the first person at the store every day, not to do paperwork. He's actually stocking the store, putting out produce, even bagging groceries.

"I need to be in the store, hands on and lead by example," said Jeffcoat.

He's also doing what he said he loves most, greeting customers.

"People are walking up to me almost every hour thanking me for being here, and I turn around and thank them for having me here. I'm thankful," said Jeffcoat.

And we're thankful he answered the call to serve the people in Marks, Mississippi -- the start of Dr. Martin Luther King Jr's Mule Train and Poor People's Campaign.

Jeffcoat said he plans on using local farmers who contribute to a co-op to provide fresh vegetables and produce. He will also allow farmers a small space inside the store to sell their goods.

And Katina tells us, if you spend a couple of hours with him, you can tell Jeffcoat genuinely loves what he does.

He also said he's strict on employees, but that's because he wants the store to survive. He plans to move to Marks to ensure the grocery store won't go under like the others and so residents can get fresh food.