Linda Dunikoski made her final appeal to the jury before they headed to deliberations to determine if the killing amounts to murder. 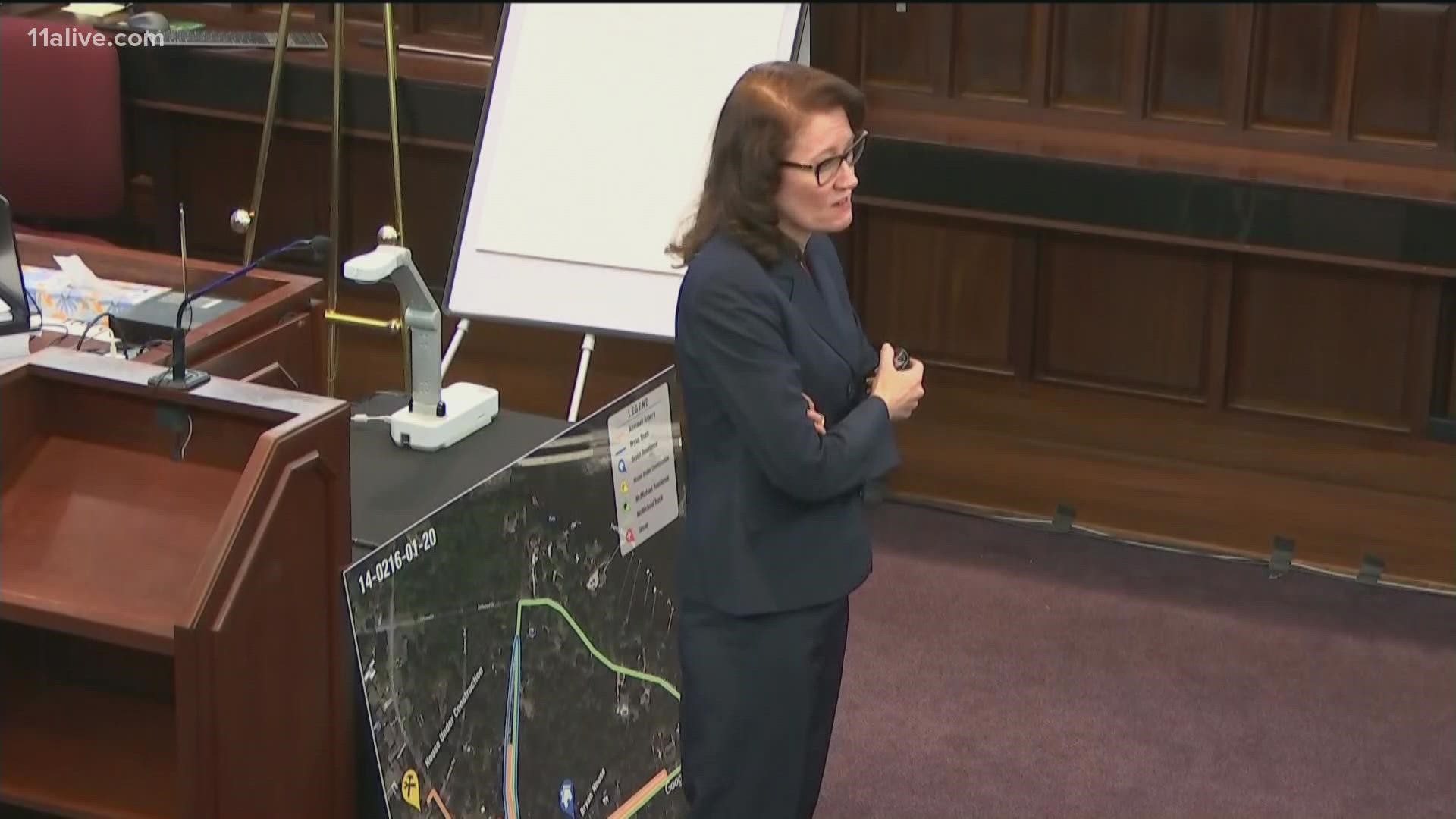 GLYNN COUNTY, Ga. — Prosecutor Linda Dunikoski cut to a core claim of the defense in her final rebuttal Tuesday: that Travis McMichael, who shot Ahmaud Arbery, feared for his community and for his life when he killed the 25-year-old Black man on Feb. 23, 2020.

"There's no fear here. There's only anger," she said. Arbery was killed, she said, "for absolutely no good reason."

Dunikoski made her final appeal to the jury before they headed to deliberations to determine if the killing amounts to murder.

In the prosecutor's rebuttal, following closing arguments on Monday, the choice on whether to convict Travis and his father Greg McMichael and the third defendant, William "Roddie" Bryan, was clear.

RELATED: As jury heads to deliberations in trial of killing of Ahmaud Arbery, anxious wait for verdict

"They committed four felonies against Ahmaud Arbery in violation of his personal liberty before he finally tried to run around their truck, after running them for five minutes. He was trying to get away from these strangers who were yelling at him, threatening to kill him," she said. "And then they killed him."

Dunikoski asked the jury: "Do you have any doubt that they committed all the charges in the indictment?"

Dunikoski recounted many of the themes of her original closing argument on Monday, in which she characterized the events of Feb. 23, 2020 as an "attack on Ahmaud Arbery" - initiated by father and son Greg and Travis McMichael, borne out of unjustified suspicions and assumptions about the 25-year-old Black man.

"This is a fellow citizen, this is a human being," she said, in one stretch where she reviewed the case against Greg McMichael and his statements to law enforcement and 911 the day of Arbery's death. "He assumed the worst. 'He must have committed some crime.' What's your emergency? 'There’s a Black man running down the street.'"

In a closing rebuttal that was marked by an unusual number of objections from the defense, Dunikoski again cut at the citizen's arrest argument that has been at the heart of the defense.

RELATED: What are the three defendants in the trial of the killing of Ahmaud Arbery charged with?

And she spoke about the claim of self-defense in the moment Travis McMichael shot Arbery, saying you can't be the unjustified aggressor in a situation under law and then claim self-defense if some violence arises out of the situation.

"Who started this? It wasn't Ahmaud Arbery," she said.

Credit: AP
Travis McMichael sits with his attorneys before the start of closing arguments to the jury during the trial of he, and his father Greg McMichael, and William "Roddie" Bryan, at the Glynn County Courthouse, Monday, Nov. 22, 2021, in Brunswick, Ga. The three men charged with the February 2020 slaying of 25-year-old Ahmaud Arbery. (AP Photo/Stephen B. Morton, Pool)

She laid out how the McMichaels could have chosen a different course of action the day Arbery was killed - "the first alternative is don't start this," "don't chase down strangers to confront them," "don't point a shotgun at people."

"This was a 3-on-1. How about some empathy? Where is Travis McMichael's empathy? Where is Greg McMichael's empathy?" she asked. "Where do they go, you know, 'Wow. I wonder what I'm doing to this other person. I wonder what it looks like from their point of view. I wonder if we might be scaring or startling this person. I wonder if it may be so bad that they might react in a negative way.' Where's the empathy?"

Arbery's mother, Wanda Cooper-Jones, said she felt Dunikoski did a "fantastic" job and that there would be a guilty verdict in the case.

The city of Brunswick, Glynn County and state of Georgia now anxiously await the consequences of a verdict in one of the most politically and socially consequential trials in recent time here.