Travis McMichael, his father Gregory McMichael and William "Roddie" Bryan are all charged with the murder of Ahmaud Arbery. 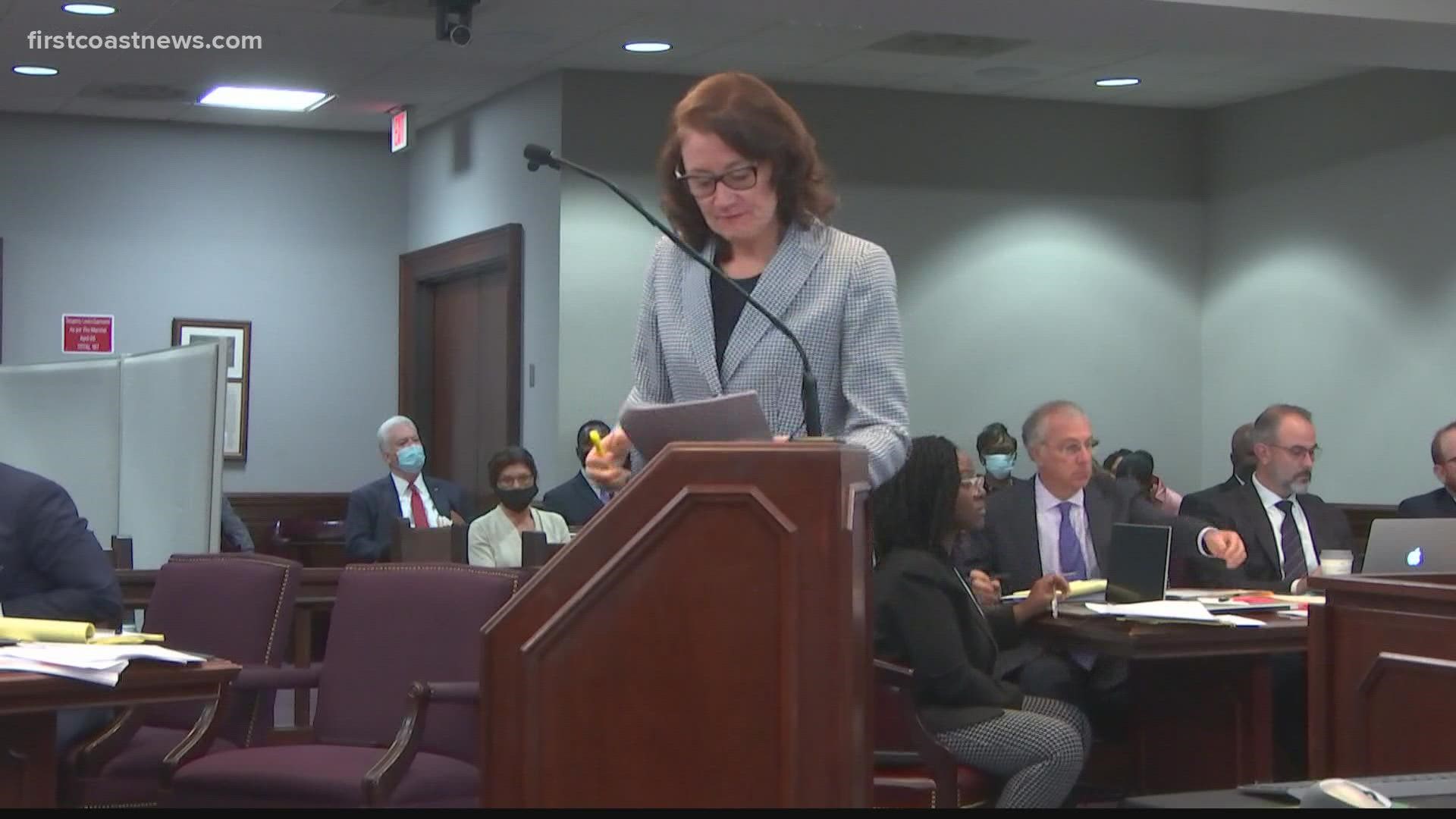 BRUNSWICK, Ga. — **WARNING: Videos contained in this article may be disturbing to some.

The sixth day of testimony in the trial in the death of Ahmaud Arbery continues Friday in Brunswick.

RELATED: Judge steps off bench after 'lack of respect' from Travis McMichael's attorney in death of Ahmaud Arbery trial

Arbery was shot and killed on Feb. 23, 2020. Cellphone video leaked to the public shows two armed white men in a truck approaching the 25-year-old Black man as he runs down the road. One of the men, later identified as Travis McMichael, and Arbery struggle over McMichael's shotgun before Arbery is shot and collapses.

Travis McMichael, his father Gregory McMichael and William "Roddie" Bryan, who recorded the video, are all charged with murder in Arbery's death.

“The parents of Ahmaud Arbery suffered the unspeakable loss of their son, who was hunted down, cornered and shot, for being a Black man jogging in a white neighborhood. It is not illegal or inappropriate for Black pastors to be present to support the parents of Ahmaud or any other Black victims. We are going to bring 100 Black pastors to pray with the family next week, and we welcome all those who want to show their support and add their prayers to ours.”

2:09 p.m.: "I figured he had shot somebody," Bryan continued in the interview with Seacrist. Seacrist says Bryan told him he hadn't seen the surveillance videos from home under construction and didn't even know they existed

2:06 p.m.: Seacrist said when he interviewed Bryan in May 2020, he asked Bryan what made him think Arbery did something wrong. "It was just instinct man, I don't know," Bryan replied.

1:55 p.m.: Travis McMichael and Roddie Bryan were taking notes at various points during Agent Seacrist's testimony. Greg McMichael is alternating his gaze between the jury box and the witness stand. Jurors in the box all focused on Agent Seacrist and Larissa Ollivierre, many of them taking notes.

1:27 p.m.: We're back in court. The state calls its next witness, GBI Agent Jason Seacrist. Wanda-Cooper Jones and Marcus Arbery have not returned.

1:15 p.m.: Travis McMichael's attorney, Jason Sheffield, distances himself from Gough. Sheffield tells us Gough's statement was "totally asinine, ridiculous ... in no way do we want to exclude anyone from this process. Everyone is welcome. Come one come all."

NEW: Travis McMichael's attorney, Jason Sheffield, distances himself from Gough. Sheffield tells us Gough's statement was "totally asinine, ridiculous ... in no way do we want to exclude anyone from this process. Everyone is welcome. Come one come all." #AhmaudArbery @FCN2go pic.twitter.com/KHmAlw7bhT

12:09 p.m.: State redirect: "Was it your intent to deputize them [the McMichaels]?" "Never," Rash says. Rash says he wanted Greg to be witness, call 911, direct police where to go if they see unidentified many. Rash said it would be up to English if he wanted to press trespassing charges.

11:11 a.m.: Rubin asks Rash if he was ok Travis and Greg were out helping him look for unidentified man Feb. 11, 2020. Rash says yes. Rash says he knew Travis was armed, didn't tell Greg, Travis to go home and let them handle it.

11:08 a.m.: Cross-examination: defense attorney Bob Rubin asks Rash if he went into the home with guns drawn, searching for an unidentified man. Rash says yes because Travis told dispatch man reached for pocket, waistband when he saw him and may be armed. Said heart was pumping, adrenaline flowing. 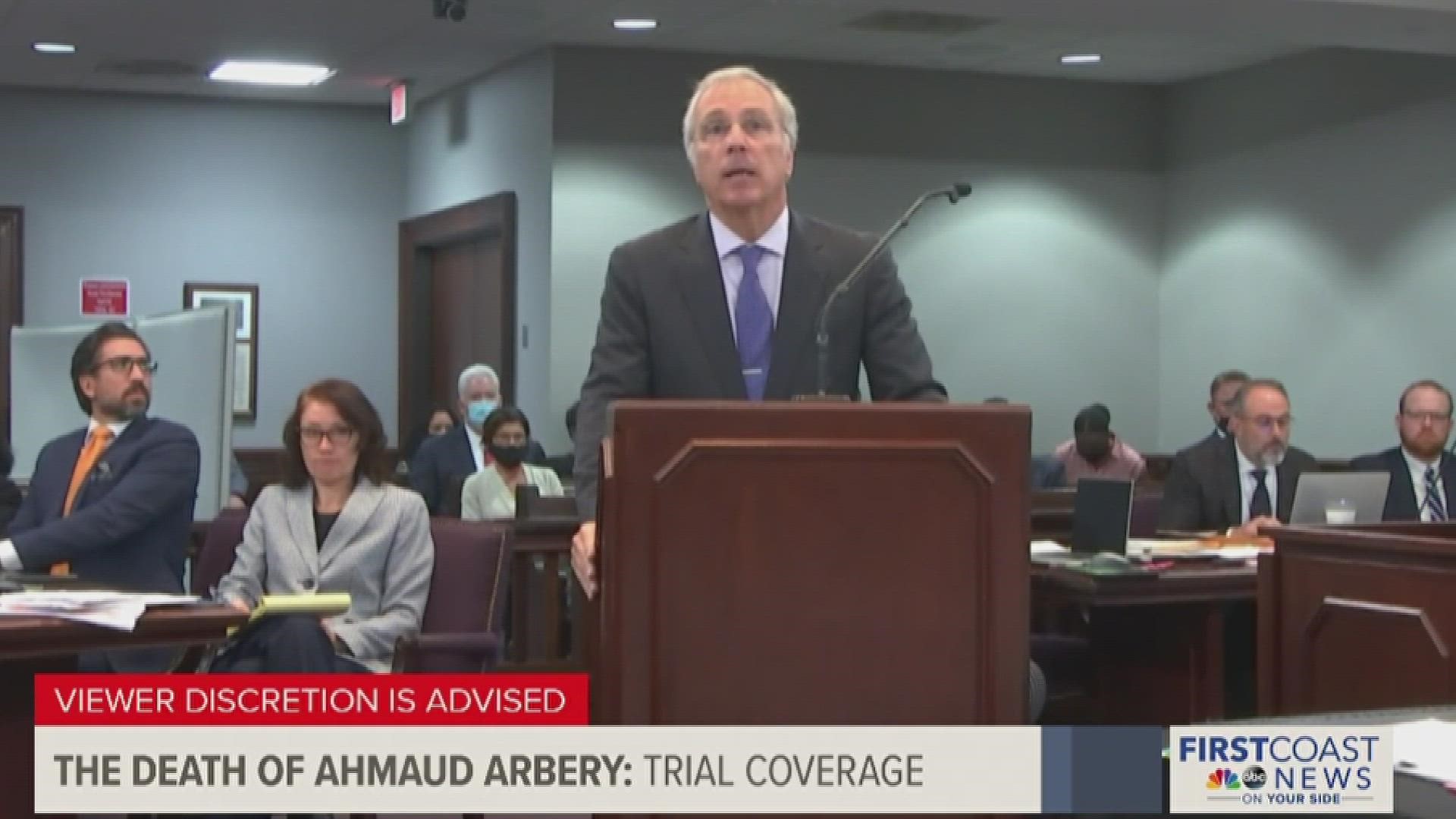 11:06 a.m.: Dunikoski objects to Rubin's use of the word "intruder". Judge Walmsley reminds jurors that the questions and statements made by lawyers are not evidence, allows Rubin to proceed.

10 a.m.: Rash heard saying to Travis and Greg in bodycam video that this unidentified male has been caught on camera several times and no one knows who he is. Describes him as "light skinned Black male ... he has twist hair ... sleeve tattoos" 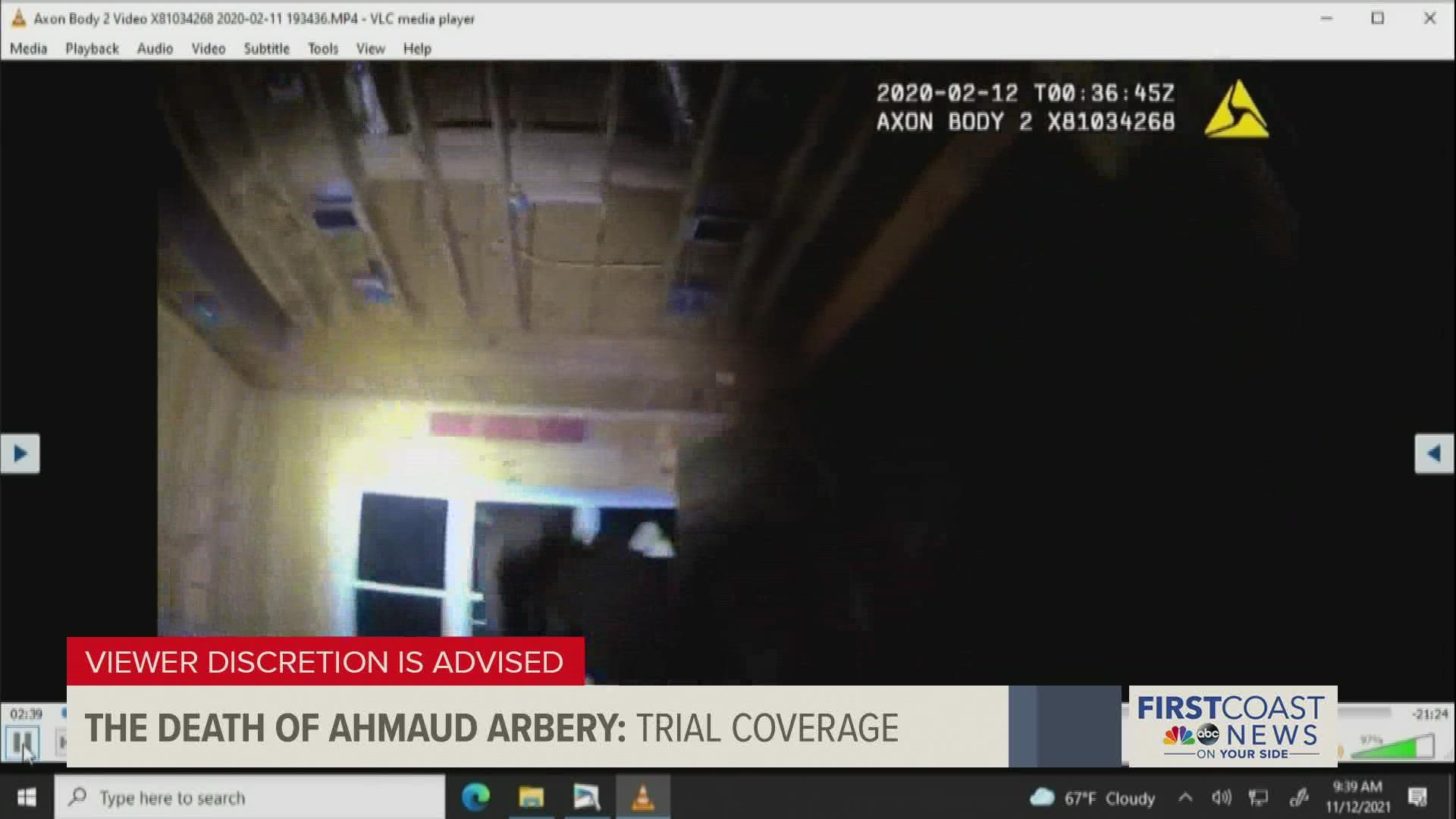 9:25 a.m.: Robert Rash with the Glynn County Police Department called to the stand. He testifies he was called to a construction site for a 'burglary in progress' roughly a week before Ahmaud Arbery died. Court plays bodycam footage.

9:02 a.m.: William Roddie Bryan’s attorney, Kevin Gough, offers a statement regarding his comments Thursday. "My apologies to anyone who may have inadvertently been offended," he said.

8:54 a.m.: Civil Rights advocate Benjamin Crump tweets that it is not illegal for Black pastors to support the parents of Ahmaud Arbery or any other Black victims. Promises to bring 100 Black pastors to pray with the family next week.

Day 6 of testimony in murder trial in death of #AhmaudArbery underway. Arbery's mother, Wanda Cooper-Jones, tells me she's going to embrace remainder of trial because she never thought this day would come. She says seeing the defendants in court is "my prayers answered." pic.twitter.com/2TLD0Wcqci

8:30 a.m.: Keitha Nelson speaks with trial attorney Richard Kuritz about the case for the three men accused of killing Ahmaud Arbery. Kuritz says that the trial is "not going well" and finds fault with how the Judge and lawyers are handling the case.

Specifically, Kuritz was critical of Judge Timothy Walmsley for not telling attorneys about Rev. Al Sharpton being in the courtroom.

He tells Nelson that he would not be surprised if we saw a future appeal in this case if a conviction is reached. 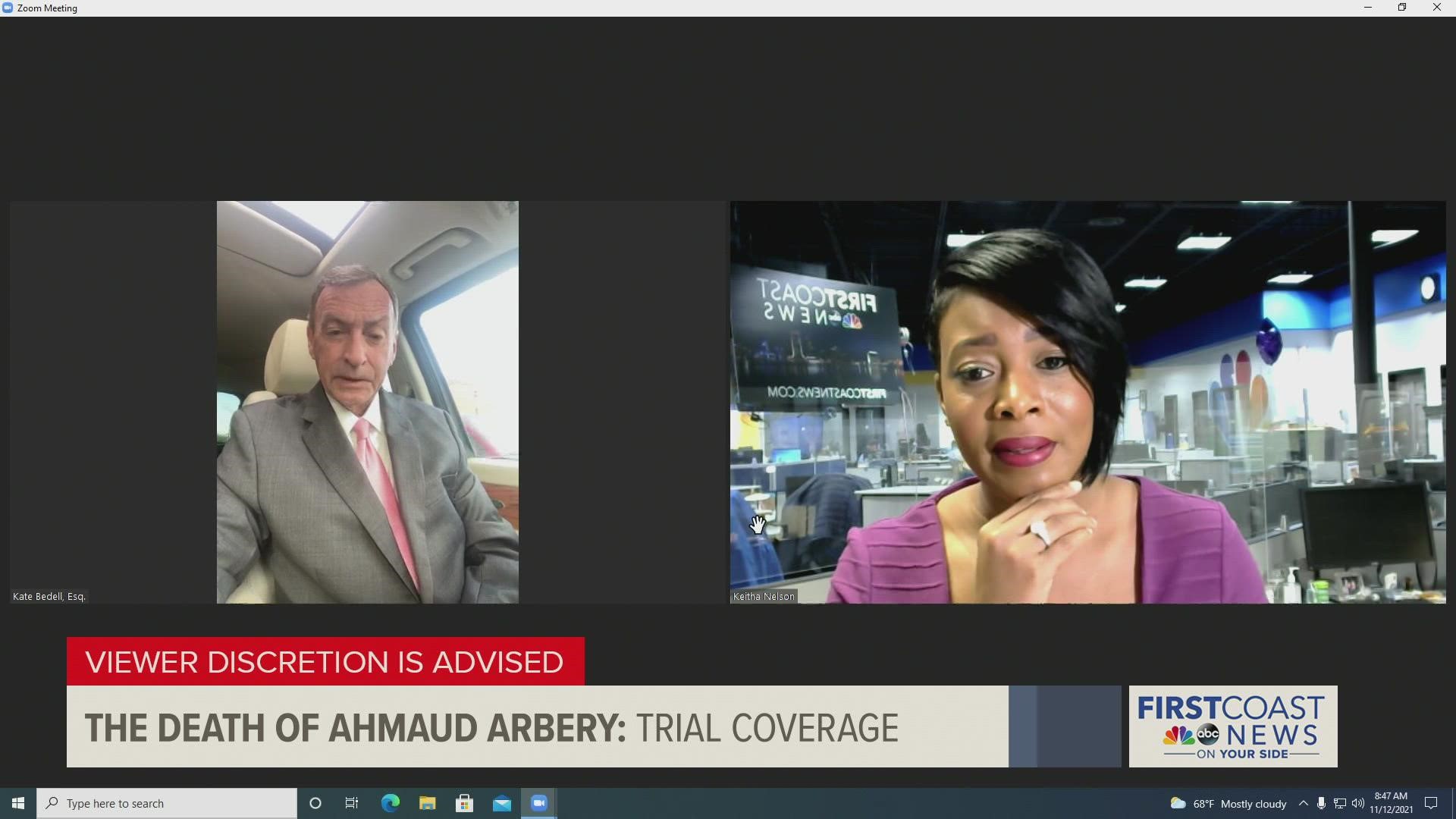