That's double the amount that has previously been available in homicide cases for information leading to an arrest and conviction. 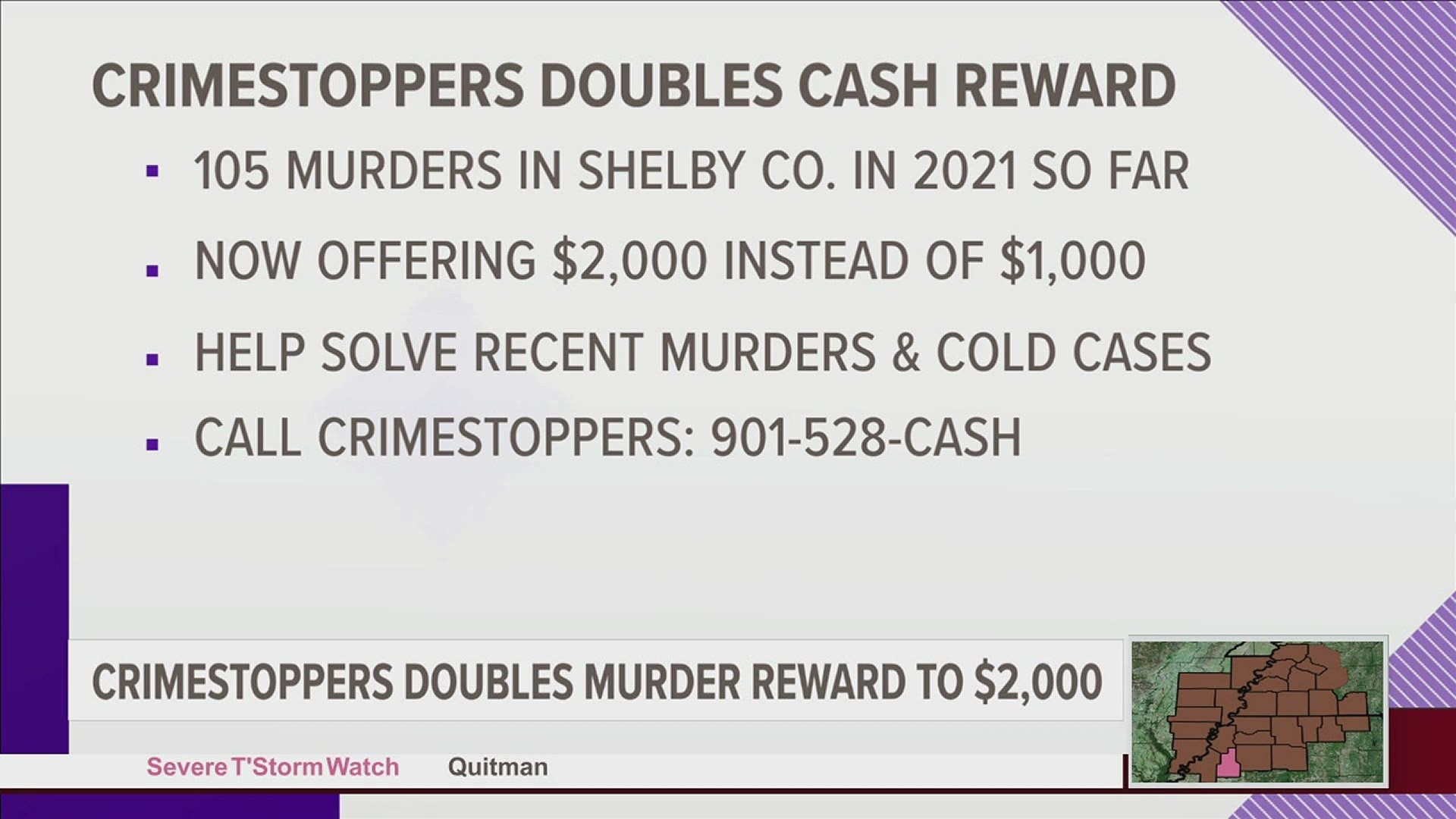 MEMPHIS, Tenn. — Crime Stoppers of Memphis and Shelby County says it is increasing the rewards offered in local murders - from $1,000 to $2,000 for information that leads to an arrest and conviction in homicide cases.

The agency said the board of directors approved the decision in light of the rise in the local murder rate.

You can read the full news release below:

Crime Stoppers of Memphis and Shelby County will start paying $2,000 in cash for tips leading to arrests in local murders — a doubling of the amount that has been available in homicide cases until now.

The decision was made by the agency’s board of directors in the face of a precipitous rise in the murder rate in Memphis and Shelby County the last few years. As of yesterday — Monday, June 7, 2021 — 103 murders have been committed, a 13% hike over last year’s pace. Arrests of suspects have occurred in about half of those cases, five with the help of citizen tips to Crime Stoppers.

“This increase in the award we pay for homicides is a significant step for Crime Stoppers. It’s also a windfall for the citizen who has information about a crime and who may find an award an incentive to contact us at 528-CASH (2274),” said E. Winslow (Buddy) Chapman, executive director of the organization. “We believe we must do more in the struggle to slow the rate of violent crime, especially homicides.

“We hope by doubling our award more citizens will contact us with information helping law enforcement solve more of these killings,” Chapman added.

Crime Stoppers has been paying as much as $1,000 for successful tips since its inception in 1983. Calls to 528-CASH (2274) are anonymous. Tipsters are given an ID number, so that they can check later to see if the information they provided led to an arrest and a cash award.

In some cases, additional award amounts are added to Crime Stoppers awards. In those cases, families or local and state government agencies supply the extra award money, which is kept in the bank by Crime Stoppers until an arrest is made.

Crime Stoppers is an independent, nonpartisan and nonprofit organization governed by volunteer citizens. The cash awards are paid out each month thanks to donations from individuals and businesses.

Crime of the Week - HOMICIDE Gunshots were heard by residents of an apartment building in the 5900 block of Hickory...

Posted by CrimeStoppers of Memphis and Shelby County on Monday, June 7, 2021