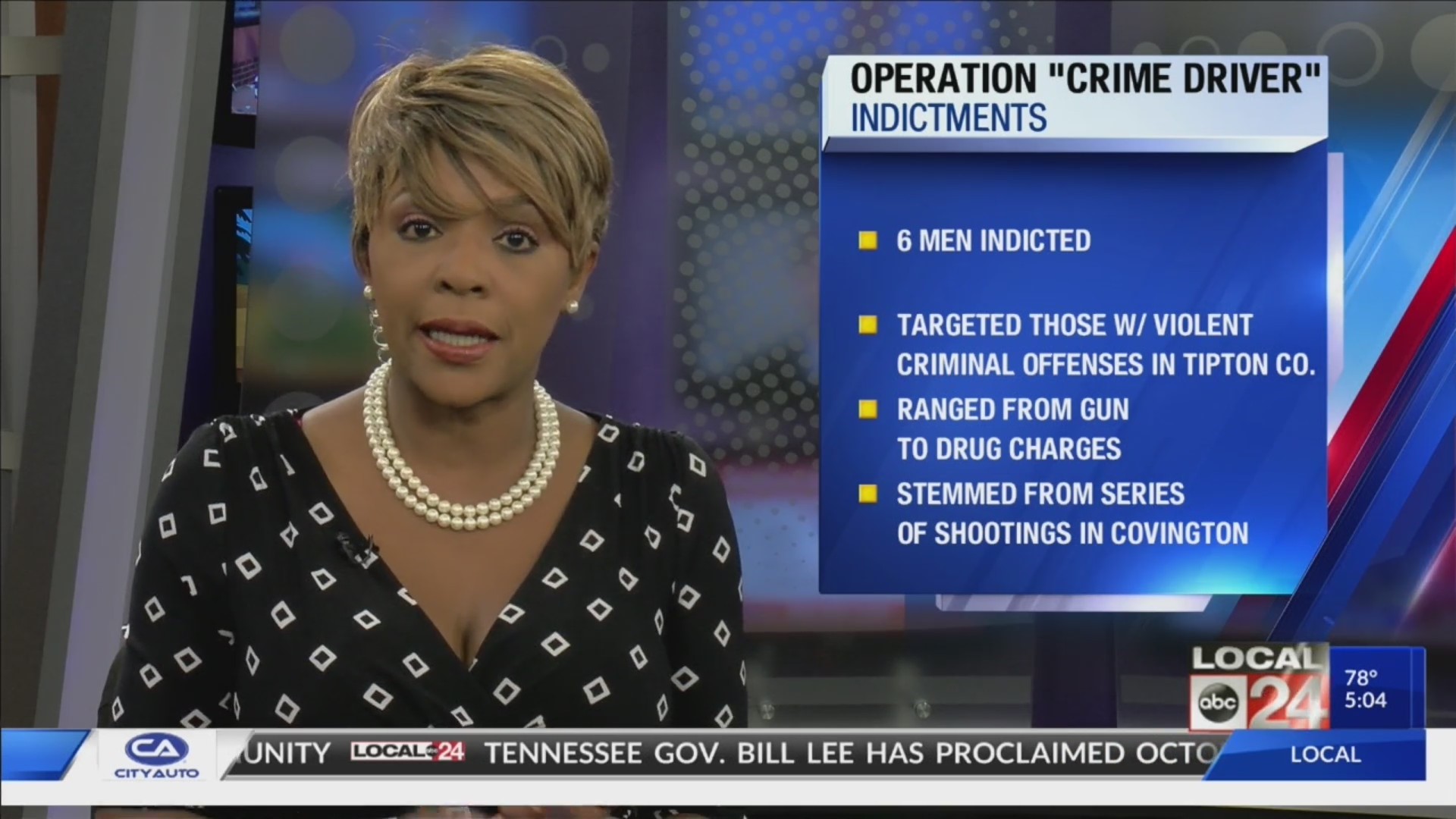 (U.S. DEPARTMENT OF JUSTICE NEWS RELEASE) – U.S. Attorney D.Michael Dunavant and 25th Judicial District Attorney General Mark Davidsonannounced today that the first phase of a joint federal, state and local lawenforcement anti-violence initiative has resulted in the federal indictments ofsix individuals from Tipton County, TN.  The agencies participating in the initiative include the U.S. Attorney’sOffice for the Western District of Tennessee, the District Attorney General’sOffice for the 25th Judicial District, the Tipton County Sheriff’s Office, theTennessee Bureau of Investigation, the Tennessee Highway Patrol, the TennesseeDepartment of Correction, the U.S. Marshals Service, and the Bureau of Alcohol,Tobacco, Firearms and Explosives.

According to information presented in court, betweenFebruary and May 2019, law enforcement targeted offenders wanted on arrestwarrants for violent criminal offenses in Tipton County, Tennessee.  Officials from the participating agenciesannounced the results of Operation “Crime Driver” at a press conference on May3, 2019, in Covington, Tennessee.

On February 20, 2019, Danny Muex, Jr., 31, of Atoka,Tennessee, led Tipton County Sheriff’s deputies on a high-speed pursuit,wrecking his vehicle.  As deputiesapprehended him, he threw a handgun from the vehicle. At the time, he was onprobation in the state of Florida as a convicted felon in possession of ahandgun.  Muex Jr., has been charged infederal court in Memphis with being a felon in possession of a firearm. Ifconvicted, he faces up to 120 months in federal prison.

On March 3, 2019, Atoka officers encountered Ramell Jackson,23, of Millington, Tennessee, during a traffic stop and found him in possessionof a handgun. At the time, he was under indictment for delivering drugs, andwas an admitted drug user. In addition, Jackson was found in possession ofammunition on May 3, 2019, after being convicted of a drug felony.  He is currently in state custody awaiting tobe arraigned on federal charges.  He ischarged in federal court in Memphis with possession of a firearm while underfelony indictment, possession of a firearm while being an unlawful user of oraddicted to a controlled substance, and being a felon in possession ofammunition. If convicted, Jackson faces up to 120 months in federal prison.

On April 3, 2019, Marcus Green, 38, of Covington, Tennessee,a former Shelby County Sheriff’s Corrections Deputy, who was on federalsupervised release for a prior federal drug conviction, was found in possessionof 1 ½  pounds of marijuana.   The U.S. Probation Office filed a petitionto revoke Green’s supervised release based upon the marijuana he possessed, andthe federal grand jury in Memphis indicted him for possession of marijuana withintent to distribute.  Green pled guiltyto both the supervised release violation and the substantive charge ofpossessing marijuana with intent to distribute. Green was sentenced to a year and a day in custody for violating hissupervised release, and he faces a sentence of up to five years imprisonment onthe substantive marijuana charge to which he pleaded guilty.

On May 3, 2019, law enforcement performed a parole check atthe residence of Maurice Nash, 46, of Atoka, Tennessee and found a stolenhandgun, $11,579 in cash, 90 pills of ecstasy, a small marijuana growoperation, and Gangster Disciples gang literature. A search of his vehicleproduced approximately three pounds of marijuana and a SKS 7.62 assaultrifle.  Nash has been charged in federalcourt in Memphis with possession of MDMA (ecstasy) and marijuana with intent todistribute, possession of firearms in furtherance of drug trafficking crimes,and possession of firearms by a convicted felon. If convicted and found to bean Armed Career Criminal, Nash faces a possible sentence of 360 months and upto life in federal prison.

Later that same day, Tipton County Sheriff deputiesencountered Isca Johnson, 23, of Covington, Tennessee, and smelled marijuanaemanating from his apartment. He gave consent to search, and deputies foundmarijuana, alprazolam, a loaded handgun, and ammunition. He admitted to owningthe items and to being an illicit drug user. Johnson has been charged infederal court in Memphis with possession of a firearm while being an unlawfuluser of or addicted to a controlled substance. If convicted, Johnson faces upto 120 months in federal prison.

Jodeci Young, 23, of Covington, Tennessee, has been chargedin federal court in Memphis with possession of a firearm while being anunlawful user of or addicted to a controlled substance on May 3, 2019.  If convicted, Young faces up to 120 months infederal prison.

U.S. Attorney D. Michael Dunavant said, “We are pleasedto join with our federal, state and local law enforcement partners to focus onthe priority areas of firearms and narcotics cases that impact public safety inour rural communities, and we are glad to support this successful jointoperation by adopting these cases for aggressive federal prosecution. We aretired of the trigger-pullers and traffickers that terrorize Tipton County, andwe will continue our laser focus on the real drivers of violent crime: guns,gangs, and drugs.”

The charges and allegations contained in the indictments aremerely accusations, and the defendants are considered innocent unless and untilproven guilty. The Bureau of Alcohol, Tobacco, Firearms and Explosives and theTipton County Sheriff’s Office investigated these cases. Special Assistant U.S.Attorney Sean Hord and Assistant U.S. Attorney Neal Oldham are prosecutingthese cases on behalf of the government.