The DOJ said Robinson has been federally charged in a new case, along with two other co-defendants, with conspiracy to commit wire fraud and money laundering. 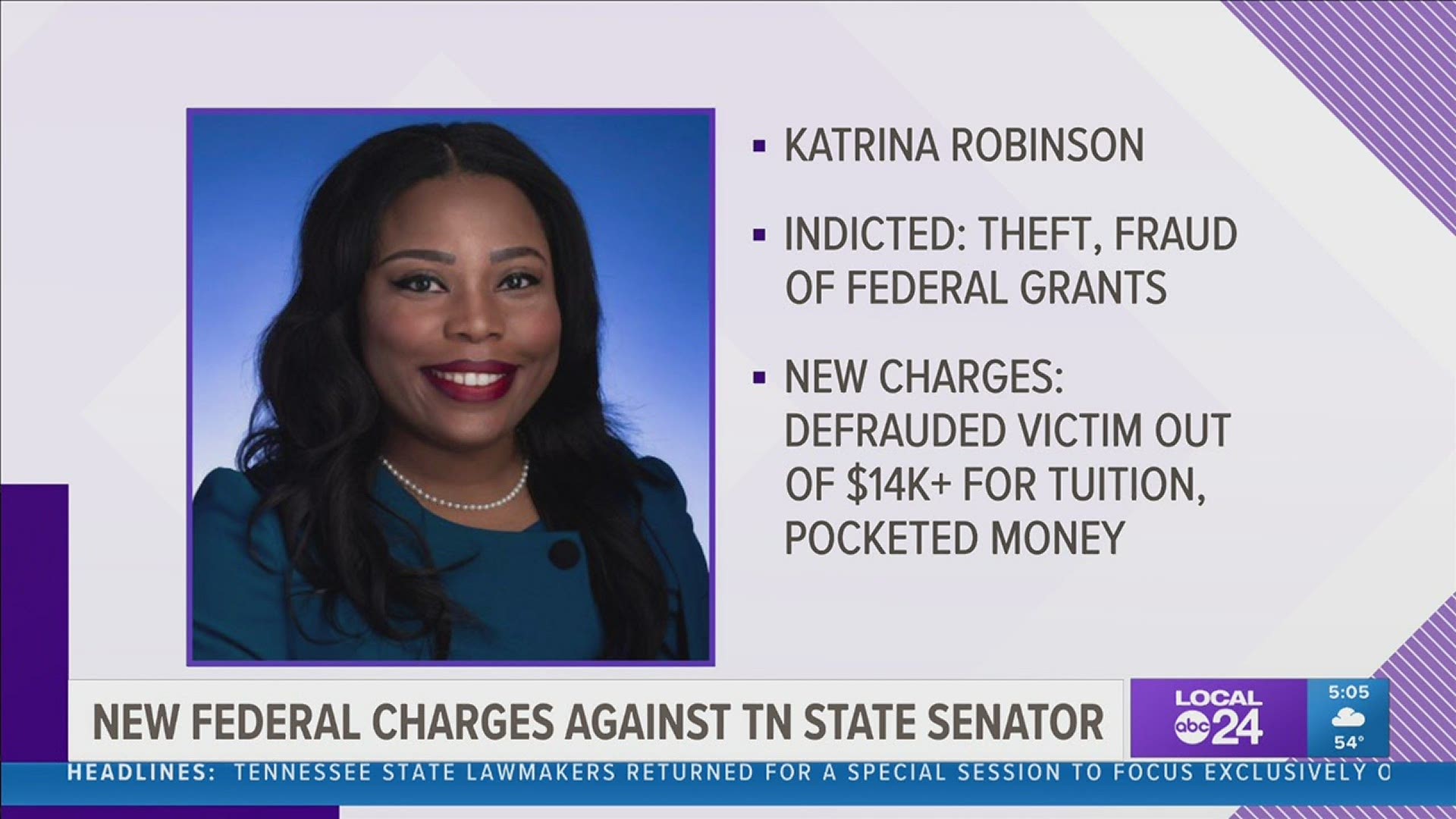 According to information presented in Court, the Healthcare Institute (“THI”) is a postsecondary educational provider located in Memphis, Tennessee. It purports to provide training programs for jobs in the healthcare field, including certified nursing assistant, phlebotomist, and licensed practical nurse. It was founded in January 2015 as a Tennessee for-profit LLC, with Katrina Robinson as director. THI received more than $10,000 in federal funds each year between 2015 and 2019. During that period, Robinson is alleged to have stolen, converted, and intentionally misapplied property of THI for her own use. As a result, on July 30, 2020, she was indicted in Case No. 2:20-cr-20147-SHL, which is currently pending trial in the U.S. District Court for the Western District of Tennessee.

As set forth in more detail in the complaint affidavit, while investigating the charges in the 2020 case, the FBI also uncovered a scheme in which the defendants convinced R.S. that Boudreaux, with whom he had an existing relationship, needed the money for tuition and expenses to attend THI. R.S. agreed and tendered $14,470.00 to THI for that purpose.  In fact, the investigation revealed that Boudreaux was never a student at THI, and the conspirators split the money among themselves for their personal benefit and unjust enrichment.

If convicted, the defendants each face a possible sentence of up to 20 years in federal prison followed by three years supervised release.  There is no parole in the federal system. The case will be presented to a federal grand jury at a later date to consider an indictment against the defendants.

This case was investigated by the Federal Bureau of Investigation (FBI).

The charges and allegations contained in the complaint are merely accusations of criminal conduct, not evidence.  The defendants are presumed innocent unless and until proven guilty beyond a reasonable doubt, and convicted through due process of law.

Assistant U.S. Attorney Chris E. Cotten is prosecuting this case on behalf of the government.

Statement from the Walter Bailey Law Firm on behalf of St. Sen. Robinson:

It is noteworthy that the complaint fails to disclose the ongoing intimate relationship between R.S. and Ms. Boudreaux. We are not aware of any victim to the crime alleged in the complaint and are surprised that the federal government would attempt to turn a small monetary transaction into a federal offense.

This additional charge comes at the same time the federal government has been forced to correct their first indictment due to legal insufficiencies. The government in the Superseding Indictment has dropped thirty-one counts from the original indictment in response to several motions to dismiss filed by Ms. Robinson. Ms. Robinson maintains her innocence to the new charge as well as to the charges in the superseding indictment wherein it is alleged that she took money from The Healthcare Institute, a company owned solely by herself.

We ask that the public be mindful that the government has been able to present their version of the events in court filings while Ms. Robinson is not able to do so. Ms. Robinson looks forward to presenting the facts to a jury of her peers and is confident that she will be found not guilty. We ask that the citizens of West Tennessee keep an open mind and to withhold judgment until all the facts have been presented."

U.S. Department of Justice
Official website of the U.S. Department of Justice (DOJ). DOJ's mission is to enforce the law and defend the interests of the United States according to the law; to ensure public safety against threats foreign and domestic; to provide federal leadership in preventing and controlling crime; to seek just punishment for those guilty of unlawful behavior; and to ensure fair and impartial administration of justice for all Americans.