Students are concerned that school administrators are not taking the incident seriously. 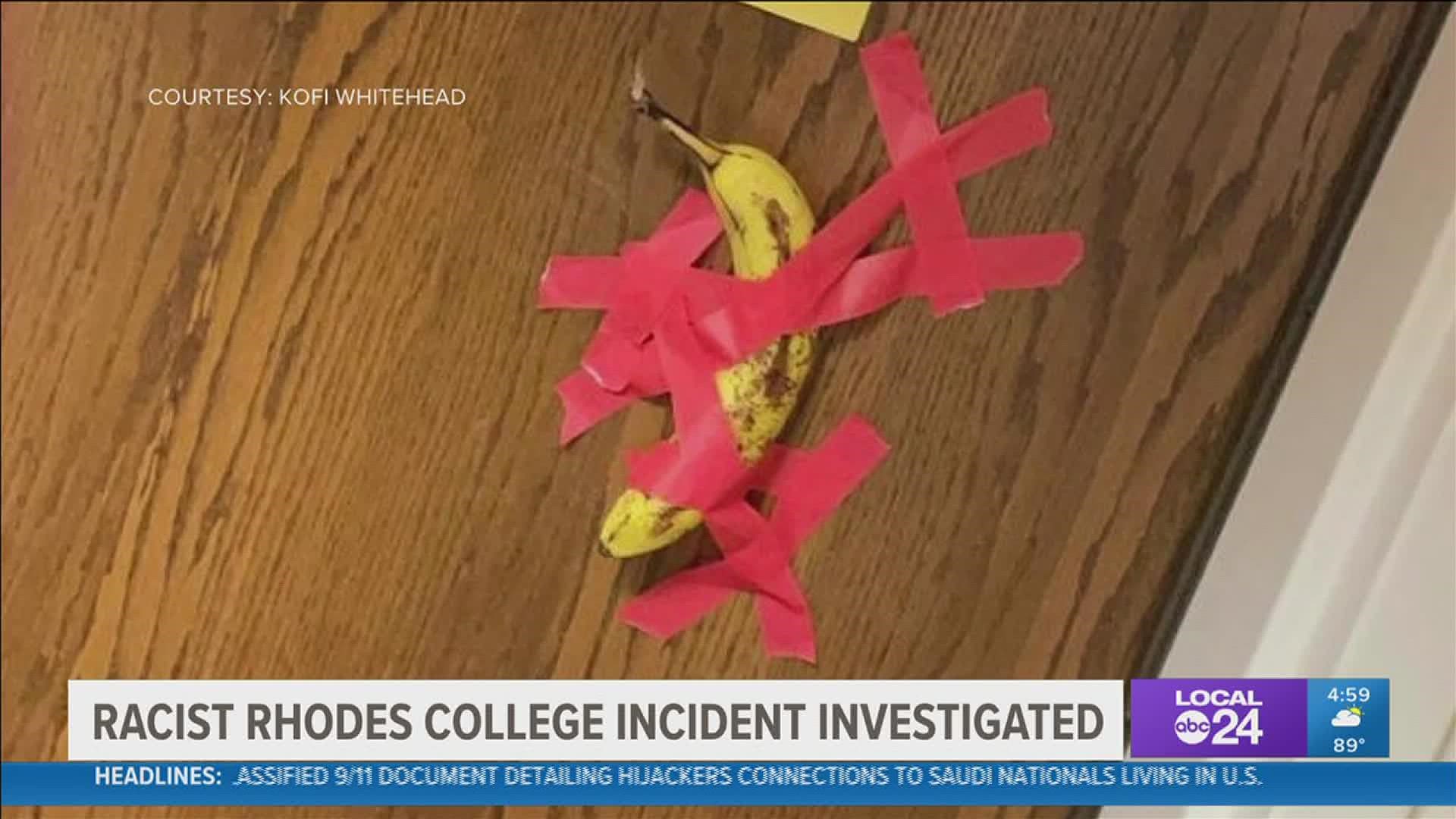 MEMPHIS, Tenn. — Black students and alumni at Rhodes College said a racially-charged act on campus went too far. Last week, a banana was taped to the door of two male African American students' dorm. Whether it was a joke or something else, students said the men were targeted because of the color of their skin. They questioned if the administration is taking the incident seriously.

Whitehead said something needs to be done about the banana taped to the dorm room of two of its group's members. Men of Distinction is a campus organization for men of color. Whitehead said its members upset and hurt  by what they saw.

"For them coming to Rhodes, they didn't expect that," said Whitehead

Whitehead said another issue is how the college administration has handled the incident.

"When racial instances happen publicly, the apology and the action should be done just as publicly," said Whitehead.

Whitehead said the Rhodes administration's lack of response is underwhelming. Only after being pushed for several days was a vague statement released by the university, according to Whitehead. A statement from the interim president doesn't directly address the incident but does say, "they have received reports about incidents that have contributed to our campus community feeling unsafe, particularly for Black and Jewish students." It says they are taking them seriously and investigations are underway. Critics say the statement is vague and isn't enough

"Just like knowing how the administration handled the situation in general was disappointing, knowing it didn't do much, said Imani Eramaus, student.

"I would hope whoever did it is properly punished," said Walker Coleman.

In addition to the Men of Distinction releasing a statement, the Rhodes College Black alumni said it wants whoever did this to be held accountable. Whitehead said they want justice and swift action taken against whoever is responsible.

"Action must be taken, If not it's a green light saying you can keep doing it with no repercussions," said Whitehead.

Here is the statement from Rhodes:

As we gather for another academic year and welcome new members into our midst, we take part in the act of creating our community anew. Being together among difference is an essential part of our residential liberal arts community and it is an opportunity to affirm our community values of mutual respect, compassion, and inclusion.

We have received both Bias Education Reporting System (BERS) and Standards of Conduct reports about incidents that have contributed to our campus community feeling unsafe, particularly for Black and Jewish students. Thank you to those who alerted us to these incidents. Know that we are taking them very seriously and that both BERS processes and Standards of Conduct investigations are underway.

Both words and actions contribute to campus climate and our sense of belonging. Racism, antisemitism, homophobia, and other harms have no place in our community. The Bias Education Reporting System (BERS) and Standards of Conduct are in place so that we can address such incidents and take the necessary educational or, when warranted, disciplinary action.

Whatever the intentions when actions or words make members of our community feel unsafe or unwelcome, they do not align with our values as a college community. It is incumbent on every member of our community to learn not only how to avoid inflicting these harms but also to intervene actively when we witness them within our community.

We will continue to investigate such matters and meaningfully and fairly address any incident of racism, anti-Semitism, or discrimination. If you have experienced or witnessed such actions or words on our campus, please submit a BERS report here. If you would prefer to share your experience in person, please reach out directly to any of the following:

Creating a culture of compassion and belonging within a community is a challenge but a worthy one. Rhodes’ culture will only change for the better if each of us embodies the values we want to see: inclusion, antiracism, and a commitment to a healthy and meaningful campus experience where every member feels safe and valued. We are a community of neighbors, and the task at hand requires full participation. It will take all of us.