Porter-Leath said the split, which the group's leaders said they learned about on a statewide phone call, is effective June 30, 2021. 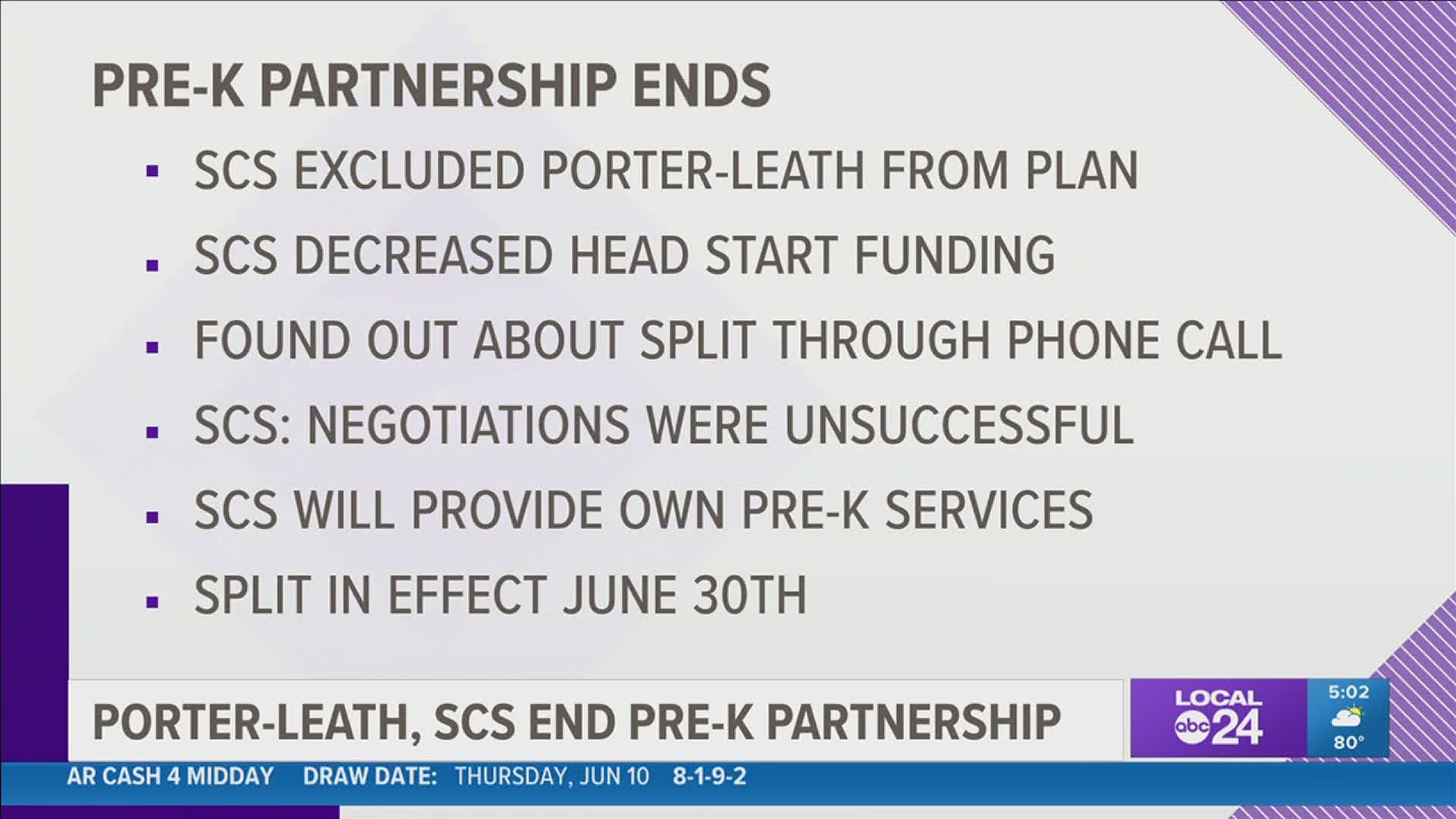 MEMPHIS, Tenn. — Porter-Leath said Thursday that Shelby County Schools is ending its relationship with the organization, saying SCS did not include the group in its 'Reimagine 901' plan and continually decreased Head Start funding for the group.

Porter-Leath said the split, which the group's leaders said they learned on a statewide phone call, is effective June 30, 2021. Porter-Leath said it will continue providing preschool services in the upcoming school year.

In response, Shelby County Schools claims Porter-Leath requested a "substantial increase in funding to provide fewer services to Pre-K students at a higher cost which could jeopardize the SCS Head Start grant by putting the District out of compliance with federal requirements." SCS went on to say that it plans to bring Pre-K services in-house after unsuccessful negotiations.

Statements from both Porter-Leath and Shelby County Schools can be found below.

Porter-Leath will continue providing preschool services for children and families in the upcoming school year, while SCS chooses to absorb additional dollars that could be used to support children and families. SCS has continually decreased Head Start funding available to Porter-Leath, making continued operations in Porter-Leath centers using Head Start resources impossible without significant cuts that would diminish quality and increase risks to health and safety for children, families, and staff. Despite ongoing negotiations, Porter-Leath learned on a statewide phone call from SCS staff that the District will end the partnership at the conclusion of the current contract, which ends June 30, 2021.

The Porter-Leath and SCS partnership solidified Shelby County as a national leader in providing high-quality early childhood services. Accomplishments include $49.5M in private funding raised by Porter-Leath for the construction of four state-of-the-art Early Childhood Academies along with increased school readiness results, with end-of-year scores now consistently in the 72% to 82% range vs. 61% prior to the start of the Head Start partnership in 2014. Porter-Leath was commended in a national statement by then-Director of Head Start Dr. Deborah Bergeron, for its partnerships across Early Head Start, Head Start, and Child Care Partnerships as a leading example in the United States.

Porter-Leath elevated early childhood outcomes in Shelby County by creating and implementing the Teacher Excellence Program (TEP) in 2017 to improve the skills and teaching practices of educators, including SCS teachers and teachers in local preschools and childcare classrooms. Private funds were raised by Porter-Leath in 2020 to allow each TEP Instructional Coach to obtain their Certificate in Early Education Leadership from the Zaentz Professional Learning Academy at the Harvard Graduate School of Education. Porter-Leath raised $160,000 to conduct community-wide research of the early childhood workforce by Bellwether Education Partners. The research informs long-term strategies to attract more professionals into early childhood positions in Memphis. Porter-Leath connected Memphis with numerous national partnerships to meet children’s developmental, physical and emotional needs. Partnerships include Momentous Institute, LENA, and Sesame Street in Communities which provide evidence-based resources, strategies and support for educators and caregivers.

“We were not included in the Reimagine 901 Plan by the District, but had responded to three issued, then canceled, RFPs from the District. We remained in negotiations with SCS, including Superintendent Dr. Ray directly, and were appalled to learn indirectly of the District’s move on a statewide phone call this morning,” said Sean Lee, Porter-Leath President. SCS is walking away from millions of dollars of private investment in infrastructure and quality improvement, but Porter-Leath will continue to utilize those investments to serve families going forward. We know that the best place for children and families is with Porter-Leath.”

Porter-Leath Board of Directors Chair, Jason Dombroksi shared “This is a disappointing development in light of the seven years of what we believed to be partnership and after Porter-Leath’s dedicated efforts to bring capital and innovation to Shelby County’s investment in early childhood services. Despite lack of communication, engagement, and professionalism from SCS, we are committed to serving children and families using our proven best-practices in early childhood education.”

After weeks of discussion with Porter-Leath officials and several of their supporters and funders, Shelby County Schools (SCS) has been unable to reach an agreement on the terms of a contract. Porter-Leath requested a substantial increase in funding to provide fewer services to Pre-K students at a higher cost which could jeopardize the SCS Head Start grant by putting the District out of compliance with federal requirements.

The annual Porter-Leath contract provides direct Pre-K services to 1,520 children out of approximately 5,600 Pre-K students served by the District. SCS has opted to bring the remaining Pre-K services in-house. Under the Head Start grant and in partnership with other Pre-K providers across the city, there will not be a disruption of services or support for students and families.

Superintendent Dr. Joris M. Ray recently announced a Reimagining 901 proposal to offer universal Pre-K access to all students in Shelby County. Although unanticipated, the move of bringing Pre-K services in-house is consistent with that goal.

“Our Early Childhood Director Divalyn Gordon has identified up to $3 million in educational cost savings to provide services to SCS families,” said Superintendent Ray. “Rather than paying increased administrative costs to Porter-Leath, SCS aims to apply these cost savings to strengthen services and program expansions.”

SCS has layers of systems in place to drive decisions with data. Key Performance Indicators presented in April 2021 show:

Students attending SCS Pre-K consistently outperform their peers on measures of kindergarten readiness, even after the pandemic.

As part of our Reimagining 901 plan and capital improvement projects, our mission is to enhance academic instruction and establish 21st century learning environments. To support these efforts, SCS will be engaging a number of local community partners as we bolster economic development. Additionally, the District’s Human Resources team will share details in the coming days about career opportunities for early childhood educators and staff impacted by this transition.

A fundamental principle of the District’s Reimagining 901 plan is rethinking the way we service children and families as we ensure the most effective and efficient delivery of teaching and learning.

SCS is grateful to Porter-Leath for their service to the children of Memphis and Shelby County and thanks their employees for their commitment to the work which will continue.

In response to Porter-Leath’s claims that SCS’ budget has steadily increased under the grant, below are key facts concerning the District’s additional fiscal operations and expanded programming in order to adhere to federal regulations.

The District's programming costs have historically increased to meet internal controls/federal compliance. Internal controls were designed to provide reasonable assurance regarding the following:

Since 2014, SCS has increased programming (including teacher assistants and HR/onboarding staff) to ensure the District is in compliance with class ratios, health mandates, and disability program services, etc.

Playgrounds are a fundamental part of the Pre-K experience. Since 2014, all Pre-K center playground equipment and fields have been a direct cost to SCS based on federal grant regulations and requirements.

SCS Head Start grant funds were utilized to provide all Pre-K students with remote learning devices and manuals during the pandemic.

SCS continues to provide wraparound support to families in community programs even without funding from Head Start, First 8, or General Funding.

There was an increase in parent engagement activities (family nights, literacy sessions, community activities, etc.) in person and virtual from the SCS office during the pandemic.

SCS streamlined registration processes by transitioning to online portals/platforms which was a direct cost to SCS.

Shelby County Schools Pre-K was awarded a gold medal for establishing and providing high quality preschool programs for the children of Shelby County.

Medals were awarded by City Health, an initiative of the de Beaumont Foundation and Kaiser Permanente, based on an analysis by the National Institute for Early Education Research (NIEER). NIEER is part of the Rutgers Graduate School of Education.

To win a gold medal, a city had to meet at least eight of NIEER’s benchmarks and have at least 30 percent of a city’s 4-year-old children enrolled in a locally- or state-funded pre-K program.

Porter-Leath requested a substantial increase in funding to provide FEWER services to Pre-K students at a HIGHER COST, jeopardizing the grant. We will continue to be good stewards of federal dollars and do what’s best for the children of SCS. https://t.co/8sazJWy7Zs