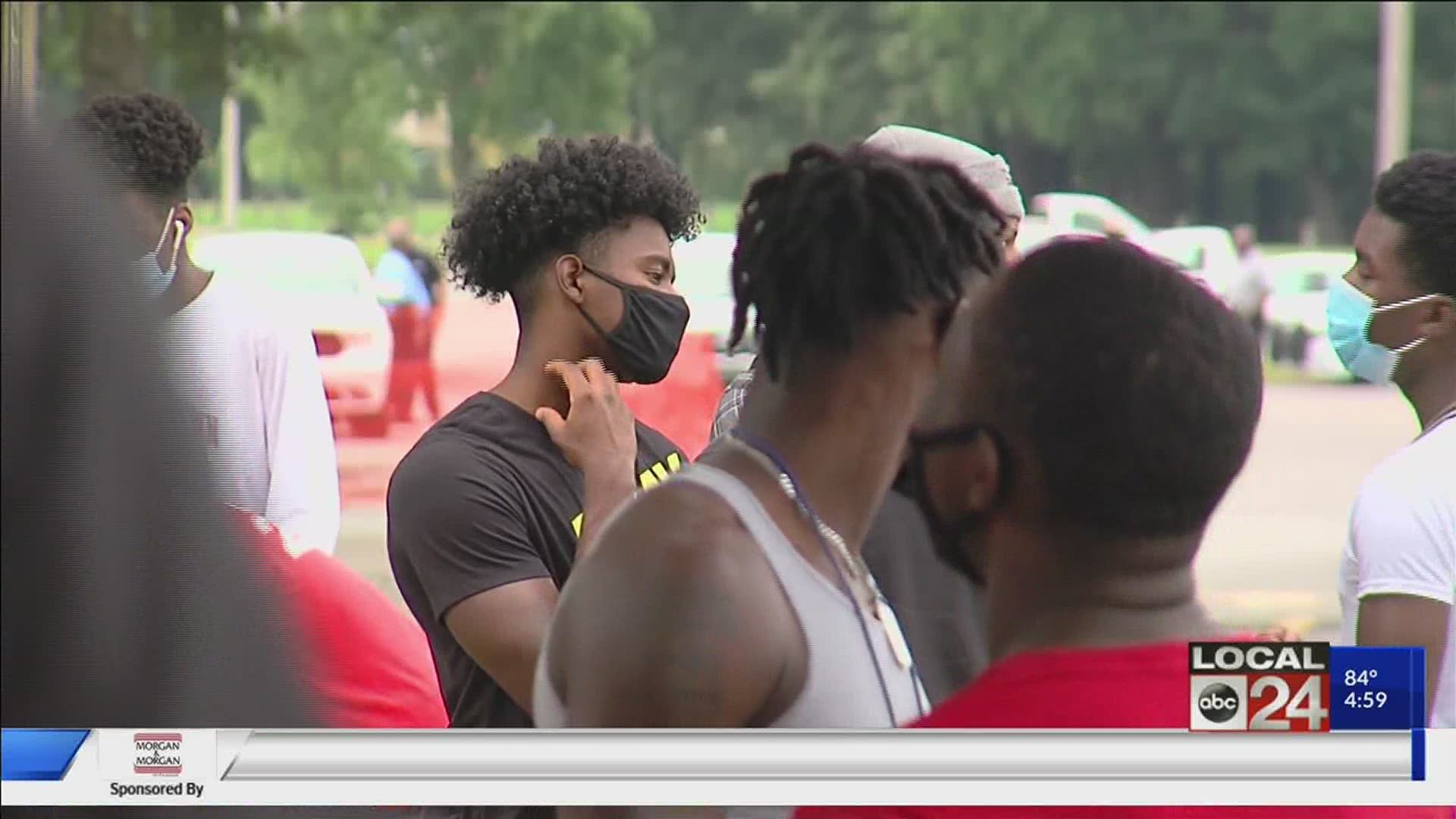 MEMPHIS, Tenn. — Dozens of parents, coaches and players protested outside the Shelby County Schools Board of Education Wednesday morning. They are upset Superintendent Dr. Joris Ray announced Tuesday he was postponing the fall sports season until further notice due to safety concerns because of COVID-19.

Most of the protesters were connected to the district's football programs and they are upset the season has been cancelled.

"We want to play. If he would have told us months ago, we would have had an opportunity to go somewhere else and play," said Reggie Brown, White Station High School football team member. "We feel like he led us on. He just played us, that is how I feel," added Brown.

"We need a chance to play. We need a chance to get on the field . We have been working so hard, " said George Thomas,Overton High School football player. "Other schools are getting to play and we're not. That's not fair," added Thomas.

Thomas' father, George Thomas Jr, echoed his sons concerns. Thomas Jr. pointed out that private schools in Memphis are playing football this season, and so are suburban schools in Shelby County. Football is occurring across the state. Only Metro Nashville and now Shelby County have halted their seasons.

"The state approved them to play," said Falandis Norry, father of a SCS player. "It's heartbreaking to a kid who as played football for ten years." 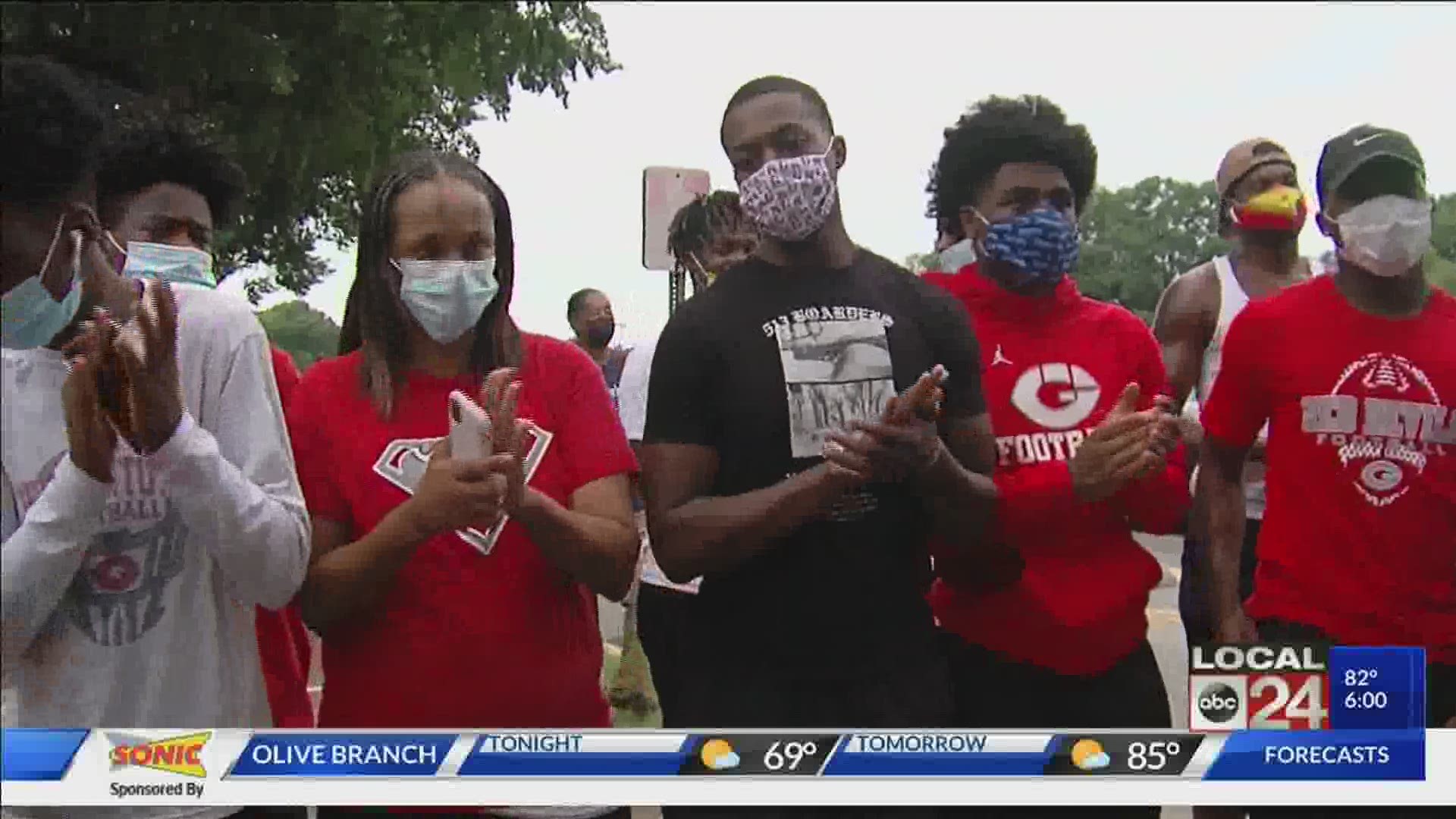 Many of the players who protested are seniors. They are upset the district is taking away their last chance to impress college coaches in hopes of getting a college scholarship to play the sport.

"It is sad to see we can't play the sport we love and it is our senior year," said Arren Alexander, Cordova High School player.

"I don't want to take an opportunity from a kid to better their life and their family's life," said John Derrick, a Kirby parent. Derrick talked about how many of these players have challenges in their home lives and football gives them hope and structure.

Here are the FACTS about our fall athletics update: We will continue showcasing activities for juniors and seniors and workshops are being planned to assist student-athletes with recruiting efforts at NO COST. I love SPORTS, but I love our STUDENTS more. #StrongerTogether pic.twitter.com/hZMSJV7AzB

Protesters hoped Dr. Ray would come outside of the building and address them, but that didn't happen. Instead, Billy Walker from SCS Student Affairs came out and made some comments.

"We hear you, but there is a better way to do this," said Walker in regards to the protest.

Walker said the district was still making decisions, but that getting students back into the classroom was the district's priority. He implied until face to face learning resumes, sports would be postponed. He said, safety is first, academics is second.

"We hear you. We feel your pain too. From a district, SCS perspective, we want to make sure you are safe," said Walker.

The SCS employee made his comments and left without taking any questions from the crowd. He also told protesters what they were doing outside the building was not safe because protesters were not social distancing - and told people to disperse.

For some of the players, being able to play this season was about more than just football.

"We know football is not the only option, but football can open a lot of doors, a lot of opportunities - and that won't be made now because the season is cancelled," said senior Kaleb Almo.

Almo went on to talk about his personal situation. "My momma died when I was 9 years old. She had cancer. I watched her fight every day to beat the cancer," said Almo.

He went on to talk about he has had to fight for things all his life, and is hurt and upset he won't be playing football his senior year. "I wanted this season more than anything. It's in my heart. I wanted it for everyone out there. It's not just for me, it's for all of you."

Senior player Jordan Lee stood in front of the group and encouraged them to stay in school despite the season being postponed.

"All of us are black young men. We have a target on our back. I don't want to see anyone in a grave. I want to see everyone on the news for something great. Be a doctor, a preacher, protester. Please do something positive with your life," said Lee.