In Tennessee, Black students are more often absent from school than others

Researchers found economically disadvantaged and disabled students were more likely to be chronically absent because of the barriers they face. 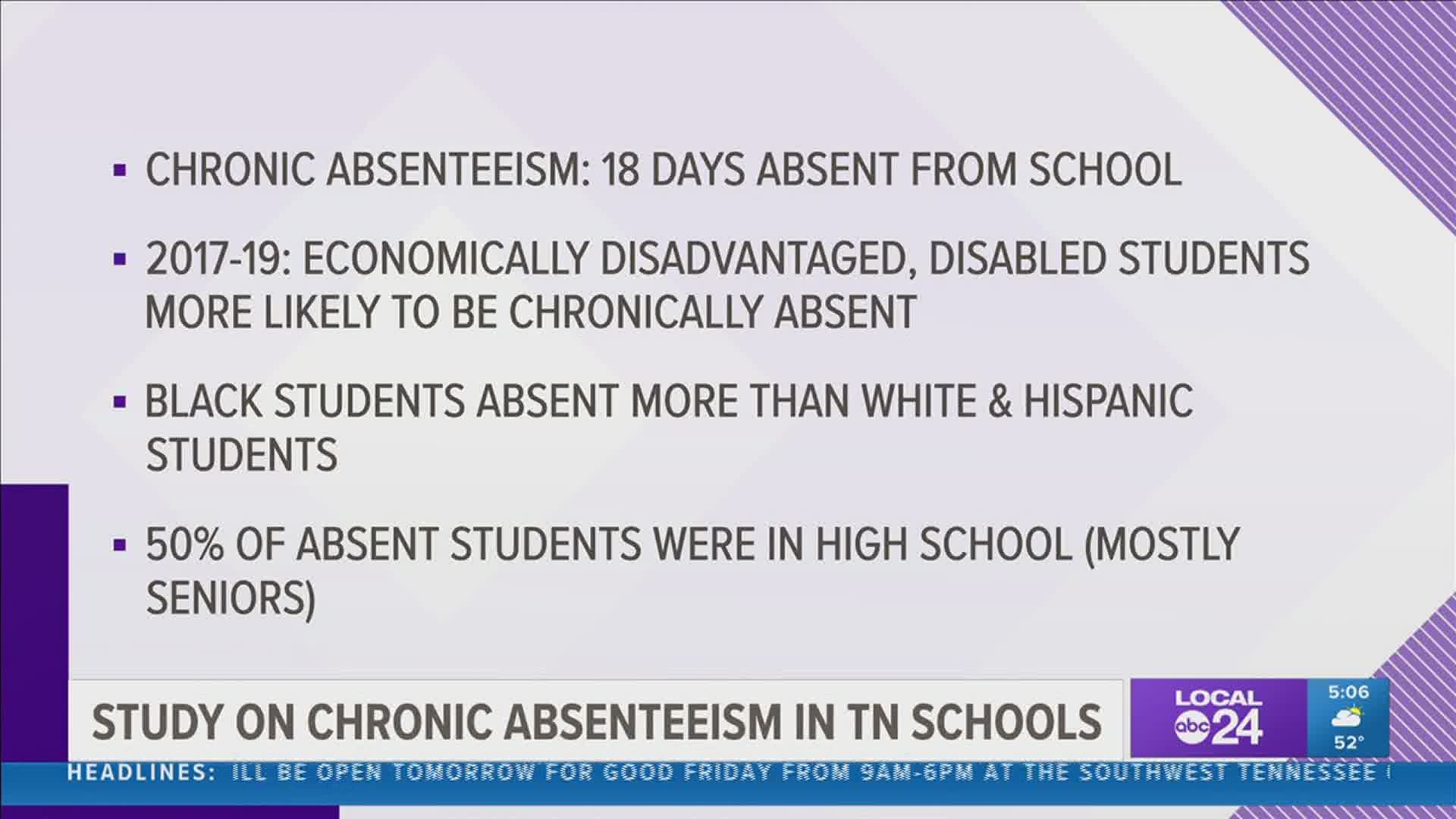 MEMPHIS, Tenn. — Black students are absent from school more than white and Hispanic students in Tennessee.

The Tennessee Comptroller's Office reviewed student attendance, including issues with chronic absenteeism. Chronic absenteeism includes both excused and unexcused absences of about 18 days from school.

Researchers found that between 2017 to 2019, economically disadvantaged and disabled students were more likely to be chronically absent because of the barriers they faced.

Nearly half of those absent students were in high school and were mostly seniors.

You can read the full report HERE.

(NEWS RELEASE) - The Tennessee Comptroller’s Office of Research and Education Accountability (OREA) has completed a thorough review of student attendance in Tennessee, including issues of chronic absenteeism and truancy.

OREA found that during the time analyzed, economically disadvantaged students and students with disabilities were more likely to be chronically absent than their peers due to the multiple barriers faced by each subgroup. Black students had higher chronic absenteeism rates than either White or Hispanic students. Hispanic students were chronically absent at a lower rate than both Black and White students during this period.

During its review of attendance data and local attendance policies, OREA concluded that variation in policies and practices at the district and school levels results in the inconsistent classification of absences as excused or unexcused across Tennessee. Outside of what is specified in state law, each district (and in some cases, each school) determines through its own policies whether an absence will be excused. As a result, a student might be considered truant in one district but would not be considered truant in another.

While TDOE collects unexcused absence data by district, school, and student, it does not calculate truancy rates as it does for chronic absenteeism. Additionally, no reliable data exists on the implementation of the progressive truancy intervention plan required by a 2017 state law. Due to lack of data and issues of local variation, OREA was unable to conduct an evaluation of truancy rates or the effectiveness of the progressive truancy intervention plan.

The Comptroller’s Office has included several policy options for the General Assembly in its report. These include changing requirements for data collection and calculation, clarifying aspects of the progressive truancy intervention plan, and making certain attendance-related policies more uniform for all districts, schools, and juvenile courts.

To read the report, please visit the Comptroller’s website at: tncot.cc/orea.