In a letter to Sen. Chuck Grassley, Reynolds and Tennessee Gov. Bill Lee are asking for a Congressional investigation into the transporting of migrant children. 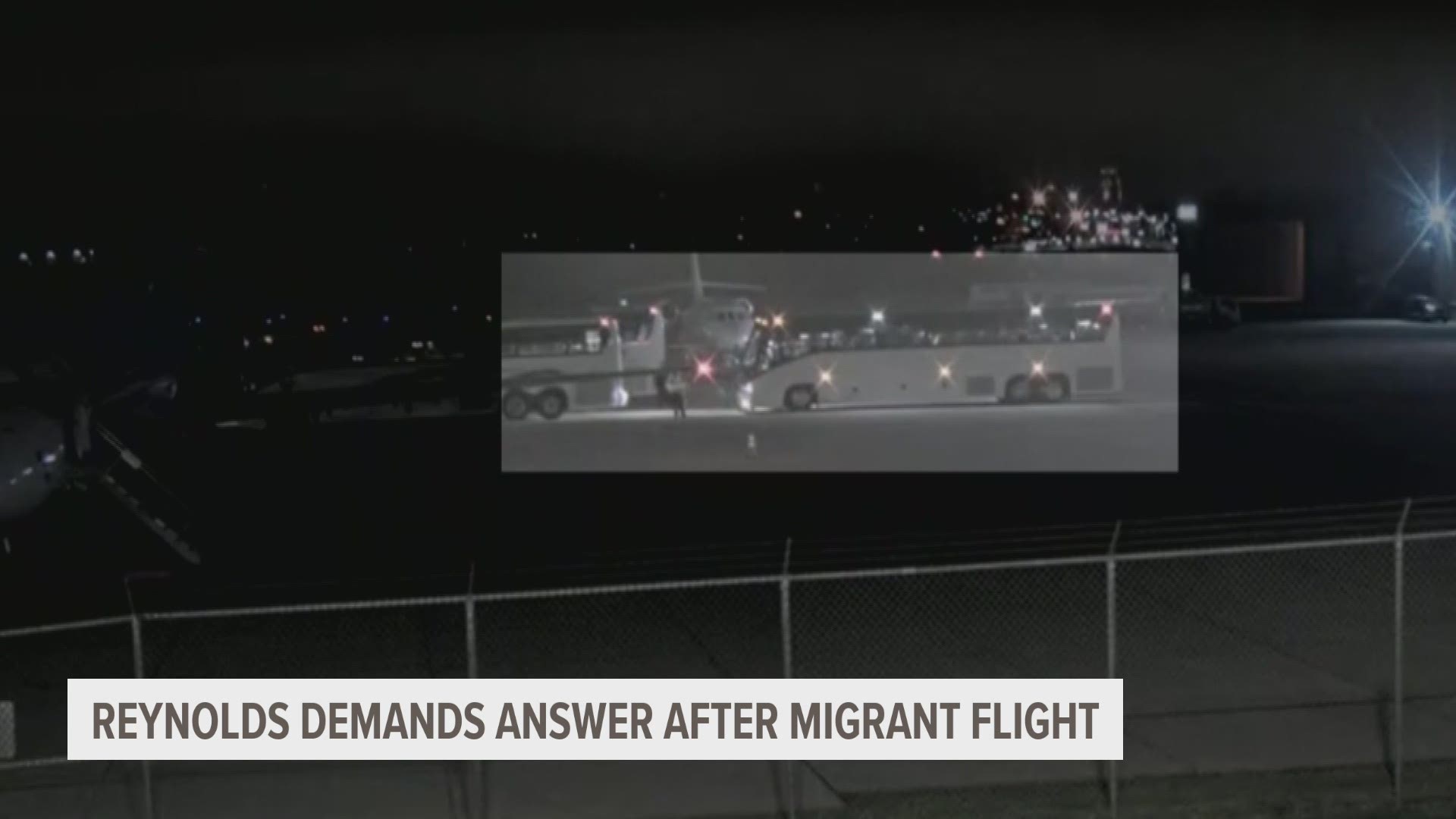 DES MOINES, Iowa — Iowa Gov. Kim Reynolds and Rep. Cindy Axne are asking Congress to investigate how the federal government transports unaccompanied migrant children after she said 19 kids were flown from California to Iowa in April.

State officials say they have been unable to get concrete answers from the U.S. Department of Health and Human Services (HHS) about the flight itself, who was on board and where the kids are now.

Two of the 19 children were unified with sponsors at the Des Moines International Airport, the source confirmed. The other children were bused to "locations in or near" Kansas City, Missouri, Janesville, Wisconsin, Chicago, Illinois, Fort Wayne, Indiana and Detroit, Michigan.

It has not been confirmed if the two children who were placed with sponsors in Des Moines stayed in Iowa or traveled to another state, according to Reynolds' office.

RELATED: VERIFY: No evidence migrant children are in the Polk County Jail

The Iowa Department of Health and Human Services notified the Biden administration in March the state would not house unaccompanied migrant children in state facilities.

Reynolds, along with Tennessee Gov. Bill Lee, said the lack of transparency surrounding the transport of minors could pose problems for law enforcement trying to investigate human trafficking cases.

The two wrote in a letter to Sen. Grassley:

“We are writing to support your continued calls for the Senate Judiciary Committee to hold an oversight hearing regarding the current border crisis. We believe this hearing should also address the Biden Administration’s failure to provide notice and transparency in their movement of unaccompanied migrant children into states.”

“These experiences sow seeds of mistrust in our communities, and work to intentionally subvert the will of the people for a secure border and a clear, lawful immigration process. Additionally, the federal government’s failure to provide advance notification to states places an undue burden on our law enforcement partners to determine whether these types of flights constitute a criminal act of human trafficking or the federally-sponsored transport of vulnerable children.”

Both Reynolds and Lee are Republicans, and a "similar situation" happened in Tennessee in May, according to Reynolds' office.

“The lack of transparency and accountability from our federal immigration officials regarding the April 22 flight from Long Beach to Des Moines is totally unacceptable.

As a mom, I was disturbed to see reports of a flight transporting unaccompanied children, and more than a month ago I sought clarification from HHS and ICE – but received no confirmation of the flight like the one provided to Senator Grassley a few weeks ago.

As this new administration tries to rebuild trust and fix our broken immigration system, denying the existence of a taxpayer-funded flight carrying migrant children into our community will only undermine the integrity of that mission, and will unfortunately provide fodder to those who would use this episode only to feed the disinformation and conspiracies related to our current immigration policies.

I join Governor Reynolds in demanding further investigation and disclosure from HHS to determine why this flight was kept secret and why its existence was denied to both the public and to the public officials seeking to learn the whole truth.”

Local agencies and news outlets, including Local 5, have spent over a month investigating what transpired.

Here is the timeline of events laid out by Reynolds’ office Thursday:

The Office of Refugee Settlement (ORR) assists unaccompanied children who are 18 years old or younger, do not have lawful immigration status in the United States and do not have a parent or legal guardian in the U.S. to provide them care.

The agency's policies "require the timely release of children and youth to qualified parents, guardians, relatives or other adults, referred to as 'sponsors,'" ORR's website says.

These sponsors can be:

If a sponsor cannot be found immediately, the child may be placed at an ORR-funded care facility.

"ORR’s mission is to safely care for unaccompanied children until they can be unified with a vetted sponsor, usually a parent or close relative. As part of the unification process, ORR is currently facilitating travel for the children in ORR’s custody to their sponsors to prevent any delays. Their parents and relatives are located across the United States (U.S.), and ORR contractors use various transportation modes to unite unaccompanied children with their families. These modes include air and ground transportation options, taking into account child safety and wellness, travel time, and cost-effectiveness. This travel may consist of flights originating from various locations with stops/layovers in different airports. ORR does not have facilities in Iowa. However, vetted sponsors are located throughout the U.S."

Between October 2020 and April 2021, 163 unaccompanied children were placed with sponsors in Iowa, according to ORR data.

Whose plane is it?

There is a lot of confusion surrounding who was on board an April 22 flight that originated in Long Beach, California and landed in Des Moines, Iowa. But the answer is starting to become more clear.

Local 5 first reported about this flight on May 3.

In May, the Des Moines International Airport told Local 5 there wasn't an Immigration and Customs Enforcement (ICE) flight that landed in Des Moines on April 22.

This is where things start to get complicated.

Des Moines International Airport's executive director, Kevin Foley, told Local 5 in May that ICE notifies them if they are transferring anyone through a terminal. Foley said ICE didn't notify them about any transports on April 22.

But it turns out there was a flight from Long Beach to Des Moines that landed on April 22.

"This was not ICE"

Signature Flight Support is a fixed base operator that offers private and general aviation ground handling at the Des Moines International Airport and must report operations to the airport.

Whenever Signature provides services to chartered flights, they are required to submit a charter notification form to the Airport Authority.

That document, which General Manager Sean Kuhl confirmed was the true form he submitted, shows the charter flight was an “ICE/Government Flight” and said there would be “5-7 armed federal agents” on board.

“This was not ICE,” ICE spokesperson Mary Houtmann said in an email to Local 5 on May 7. “However, we’ve had several outlets reach out regarding this, so I am currently trying to figure out who this was.”

In a follow-up email, ICE clarified the agency's designation on the flight paperwork was incorrect.

Houtmann told Local 5 on May 13 the document was corrected and no longer shows ICE contracted the flight.

A day later, Houtmann followed up again saying the flight may have been a U.S. Department of Health and Human Services (HHS) flight, so Local 5 contacted HHS.

"The Office of Refugee Resettlement (ORR) is unable to confirm what was witnessed,” HHS’ Administration for Children and Families Communications Office said in a May 19 email. “A normal part of the program’s operations is the transport of children to their sponsors, but we cannot confirm.”

This is a developing story and will be updated as more information becomes available.