The Iowa Department of Public Health says 683,813 total vaccine doses have been administered as of Sunday morning. This includes first and second doses. 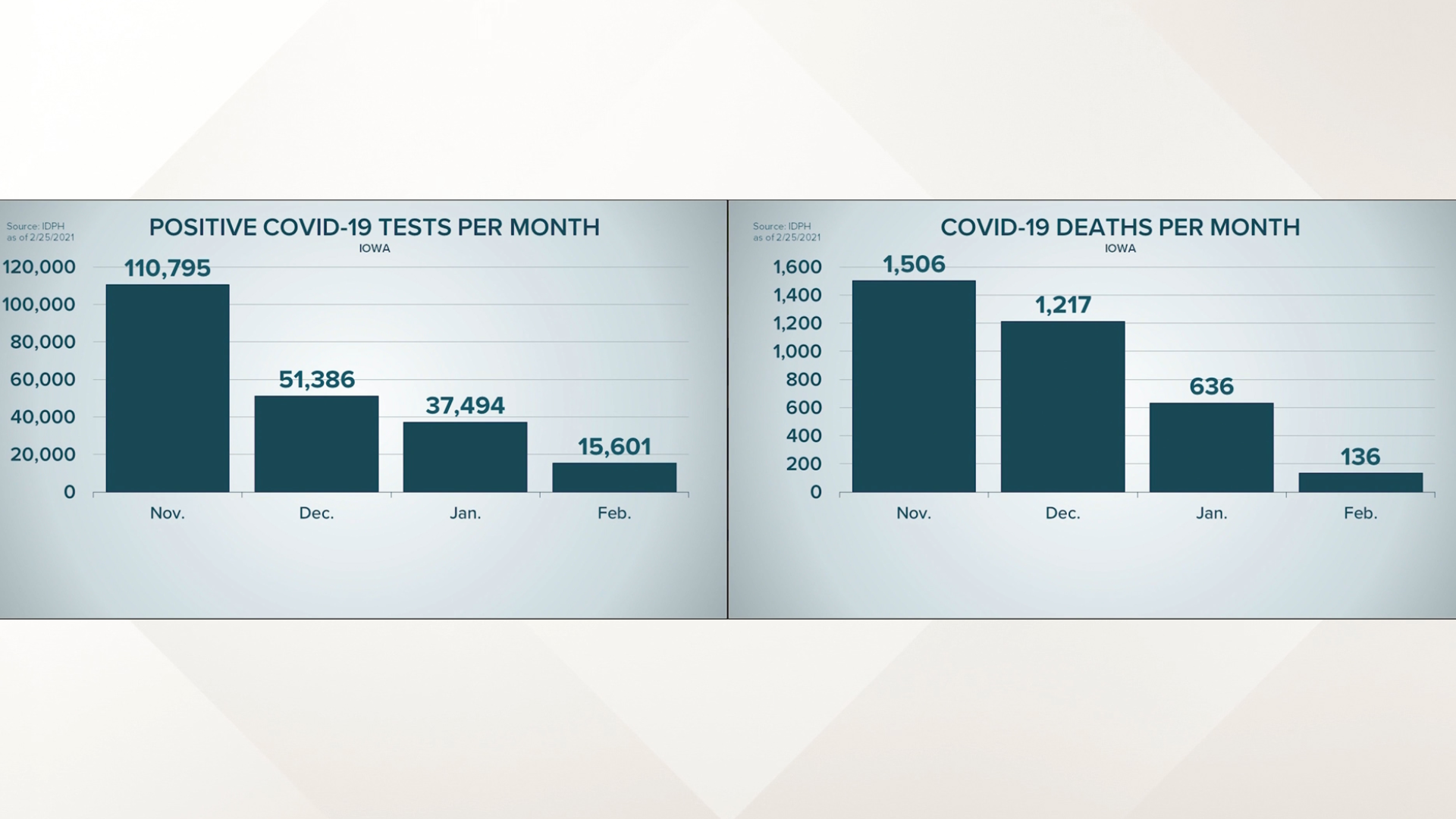 Local 5 previously updated data at 9 a.m. each day, but has adjusted the schedule to 10 a.m. based on the state's online reporting time.

EDITOR'S NOTE: The state has added more than 2.4 million test results to its website as of Saturday, Feb. 20. The state announced changes would be made to data reporting on Wednesday.

The Iowa Department of Public Health told Local 5 that 10,000 people were in the backlog of negative tests being added to the state. However, many of those individuals have been tested more than once.

These numbers differ since many Iowans have been tested more than once.

Remember: The positivity rates will be low since the state added more negative test results to the website.

More than 4.04 million tests have been administered in the state, including PCR and antigen tests.

By pulling the summary spreadsheet from the state's website, Local 5 found 315,134 Iowans are considered to be recovered from the virus.

NOTE: As of June 30, 2020, IDPH classifies anyone not hospitalized or deceased after 28 days to be "recovered."

Initial doses of the vaccine have been administered to 344,579 people in Iowa, but only 169,617 individuals have completed the series. These numbers don't add up because they are individuals who have received the vaccine, not doses administered.

Two doses must be administered for an individual to be counted as fully vaccinated.

The record for most hospitalizations was recorded on Wednesday, Nov. 18 with 1,527.

The website says 39 patients have been admitted in the last 24 hours, 50 are in the intensive care unit (ICU) and 19 are on ventilators. A total of 952 ventilators are available.

In total, 19 long-term care facilities are currently experiencing an outbreak, with total resident and staff cases at 518, a 24-hour increase of one facility and 50 cases.

The state recently said they will use both "contributing factor" and "underlying cause" when calculating deaths.

Long-term care facilities are removed from being on the outbreak list when no new cases are detected in 28 days. All data, excluding deaths, on the long-term care dashboard are an active number, not a running total, according to the Iowa Department of Public Health.

IDPH announced that several changes to the state website and how LTC data would be reported would start Friday, Jan. 8:

As of noon Friday, 519 staff members at Iowa Department of Human Services (DHS) facilities and 346 patients have tested positive for the virus.

Of those cases, 516 staff and 343 patients are considered to be recovered.

DHS reported the death of a second resident due to virus complications on Jan. 7.

"Our hearts go out to the family and friends of the deceased," the agency said in a release on its website.

The document below details outbreaks at each facility and how DHS has responded to the pandemic in real-time. It also includes individuals that are considered to be recovered.

RELATED: Iowa will now include antigen test results in COVID-19 data despite tests being less accurate

Here's a quick look at central Iowa data by county from the coronavirus website:

There are 985 positive tests pending investigation as of this update.

The coronavirus website now has a dashboard detailing serology testing as well.

Here's a look at the TestIowa assessments taken:

This is where you can find the total number of hospitalized patients and the breakdown of patients in ICU, on ventilators and how many have been admitted into a hospital in the last 24 hours.

RELATED: Granddaughter of COVID-19 patient in nursing home speaks out

RELATED: A week away from retirement, Marshalltown meatpacking worker dies from coronavirus