As of Monday, May 25, Arkansas officials reported 107 new COVID-19 cases, bringing the total to 6,029 positive cases in the state. 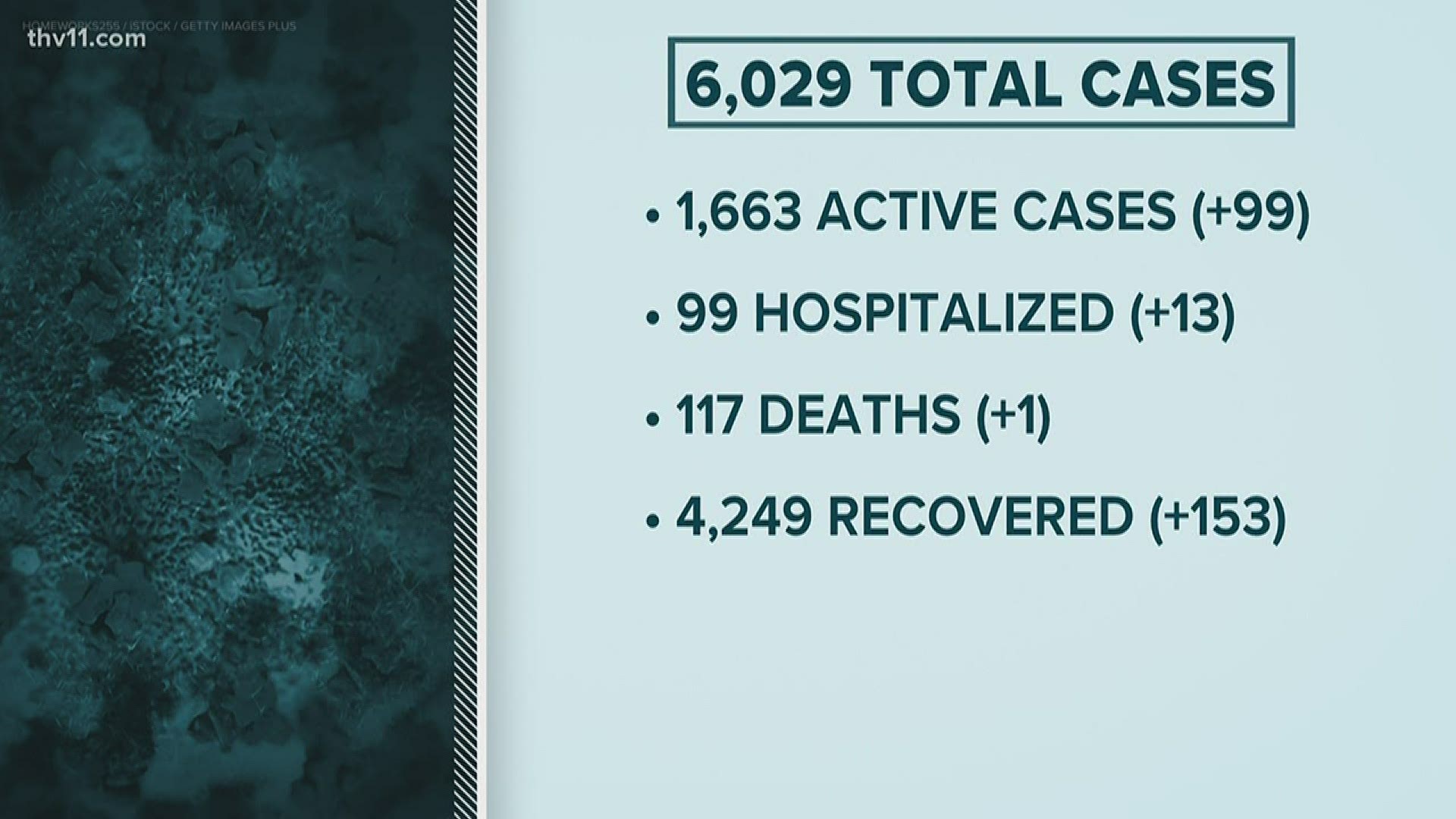 LITTLE ROCK, Arkansas — As of Monday, May 25, Arkansas officials reported 107 new COVID-19 cases, bringing the total to 6,029 positive cases in the state.

Governor Hutchinson announced on Saturday an investigation is being conducted after an applicant accessed the unemployment system and reported a potential data exposure to officials. He was notified Friday night and the system was shut down immediately in order to prevent a data breach.

As of Monday, May 18 all retail stores in Arkansas are open for business, except bars.

The Arkansas Department of Health updated its COVID-19 website Monday to report 107 new cases, bringing the known total to 6,029 cases in the state.

ADH is also reporting one new death, bringing the total to 117 deaths in Arkansas.

According to the Arkansas Department of Health, there is now a total of 5,922 positive COVID-19 cases since March 11.

The ADH updated its website to report 147 new cases on Sunday.

Gov. Hutchinson announced during a press conference there were 163 new coronavirus cases, bringing the total to 5,775 COVID-19 cases in Arkansas.

The governor said Arkansas has reached a 'second peak' in cases.

Hutchinson also noted that as of noon on Saturday, nearly 13,000 unemployment claimants in Arkansas have been approved and received their money either by direct deposit or debit card.

The governor announced he is created what he called "The Governor's Techncial Advisory Board," where Dr. Austin Porter III of the Department of Health will be the chairman. The board will help look at new technologies that may help with things such as contact-tracing. The goal is to help build and manage the well-being of Arkansas for the fall.

Dr. Smith provides a breakdown of the numbers:

The Arkansas Department of Health released a report on businesses with COVID-19 cases.

In that report, there were 208 total cases in the poultry business. Of the 208 cases, 136 employees are considered active cases.

Nine businesses have been identified as having five or more active COVID-19 cases. Out of the nine businesses, seven of them are food processing plants.

Gov. Hutchinson announced during a press conference there were 154 new coronavirus cases, bringing the total to 5,612 COVID-19 cases in Arkansas.

There were 3 new deaths, bringing the total amount of deaths to 113.

Of the 154 new cases, Dr. Smith said 135 cases are in the community and 19 were in prison facilities.

Smith also announced that the Arkansas Department of Health is updating its directive on elective surgeries, which goes into effect Monday.

That update removes restrictions on hospital stays and opens up who is allowed to have surgeries.

The directive still would require testing within 48 hours, but not every procedure won't require a coronavirus test.

In response to a question about reopening and the increase in new cases, Hutchinson said the state has been "measured about lifting" restrictions gradually. He said officials have been careful about staggering the reopening of certain activities and businesses.

Hutchinson said there is concern about the increase in cases, but he said we aren't going to revert Phase One.

Hutchinson said he Arkansans will have to "learn to manage this economy."

"We're also going to have to stop the spread of the virus and you've got to do those two things simultaneously."

Dr. Smith broke down the 5,458 coronavirus cases in the state:

Dr. Nate Smith said 229 of the new positive cases are in correctional facilities and 226 were in the community.

Smith said this huge increase is "largely" due to increased testing in the state. He said in the first three weeks of May they have tested almost as many as the state did in March and April.

Gov. Hutchinson announced the largest one-day increase in coronavirus cases in Arkansas. There were 455 new cases bringing the total to 5,458.

There were 3 new deaths, bringing the total to 110 deaths due to COVID-19.

The Pandemic Unemployment Assistance website for those who are self-employed that was taken down due to the possibility of a security breach in the website's code, is now back up. THV11 is working to see if the website is safe to use.

Dr. Nate Smith with the Arkansas Department of Health provided an update to the numbers:

Since the start, 95,010 people have been tested for coronavirus in Arkansas.

The Arkansas Department of Health released a new COVID-19 case update site, which has reported 80 new positive cases. That brings the total number of known cases to 5,003.

ADH is also reporting 5 new deaths, bringing the total to 107.

Gov. Hutchinson announces bars that are associated and in restaurant facilities can be opened effective May 19. Free standing bars can be opened May 26.

During a press conference at the Forrest City Civic Center, Gov. Hutchinson announced 54 new COVID-19 cases, bringing the total to 4,813 positive cases in the state.

There were two additional deaths in the last 24 hours, bringing the total to 100.

Last week, Gov. Hutchinson said it is not an encouraging sign for quick movement into the second phase of reopening the state after officials have seen large increase of positive cases over the past several days.

RELATED: Arkansas 'not prepared' to move to Phase 2 of reopening, governor says

RELATED: Arkansas nurse returns to work after battle with COVID-19