The vaccine — one-third the dose for teens and adults — requires two shots three weeks apart. Kids vaccinated before Thanksgiving will be fully covered by Christmas. 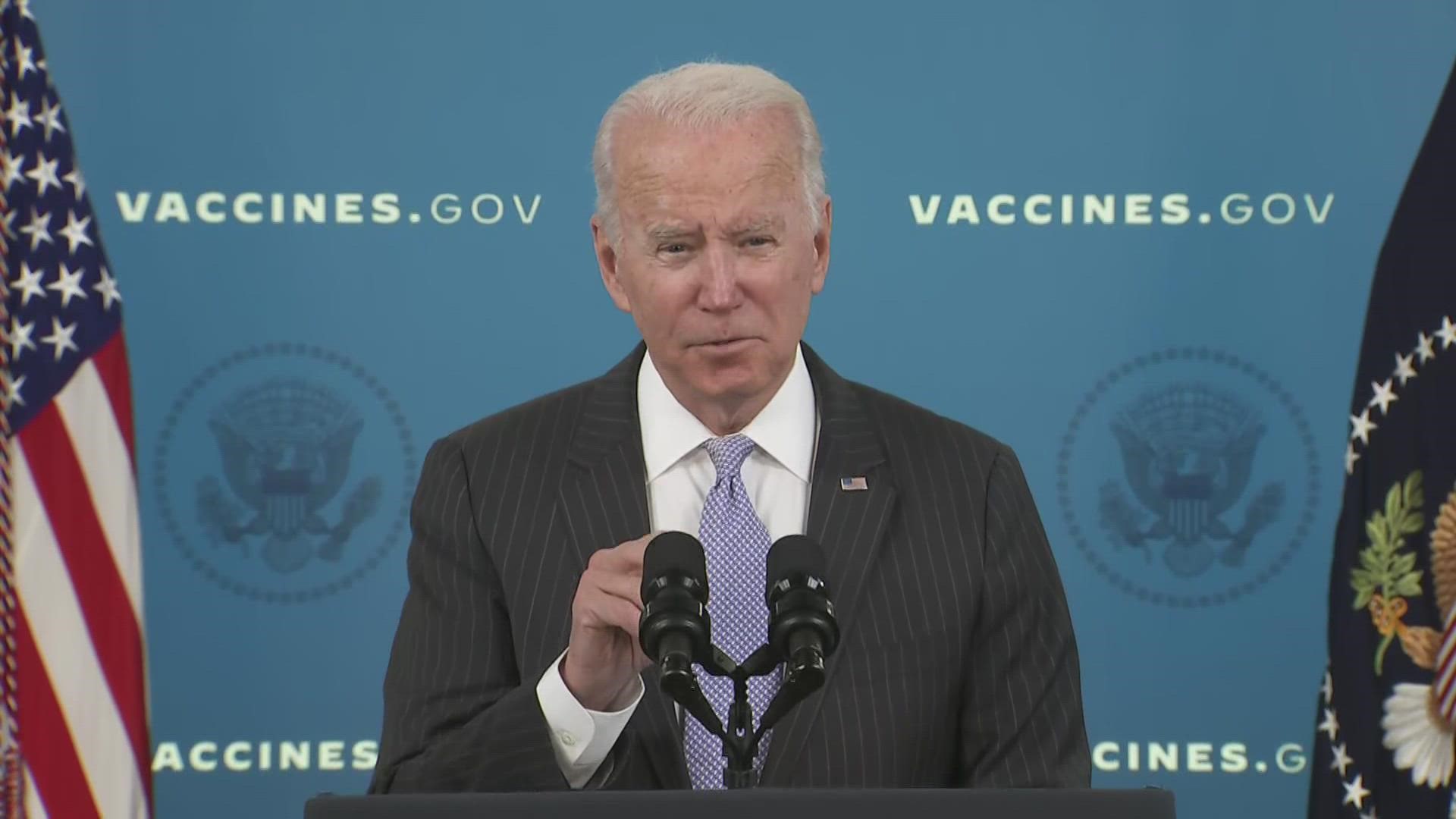 WASHINGTON, D.C., USA — The U.S. entered a new phase Wednesday in its COVID-19 vaccination campaign. Shots are now available to millions of elementary-age children in what health officials hailed as a major breakthrough after more than 18 months of illness, hospitalizations, deaths and disrupted education.

“This is not going to be ‘The Hunger Games,’” said Dr. Allison Arwady, Chicago’s public health commissioner, referring to the chaotic early national rollout of adult vaccines nearly a year ago. Chicago expected to have nearly enough vaccine in just the first week for nearly half of its 210,000 school-aged children, and many more doses later on.

“Our goal is to be ready, have a calm rollout,’’ Arwady said. 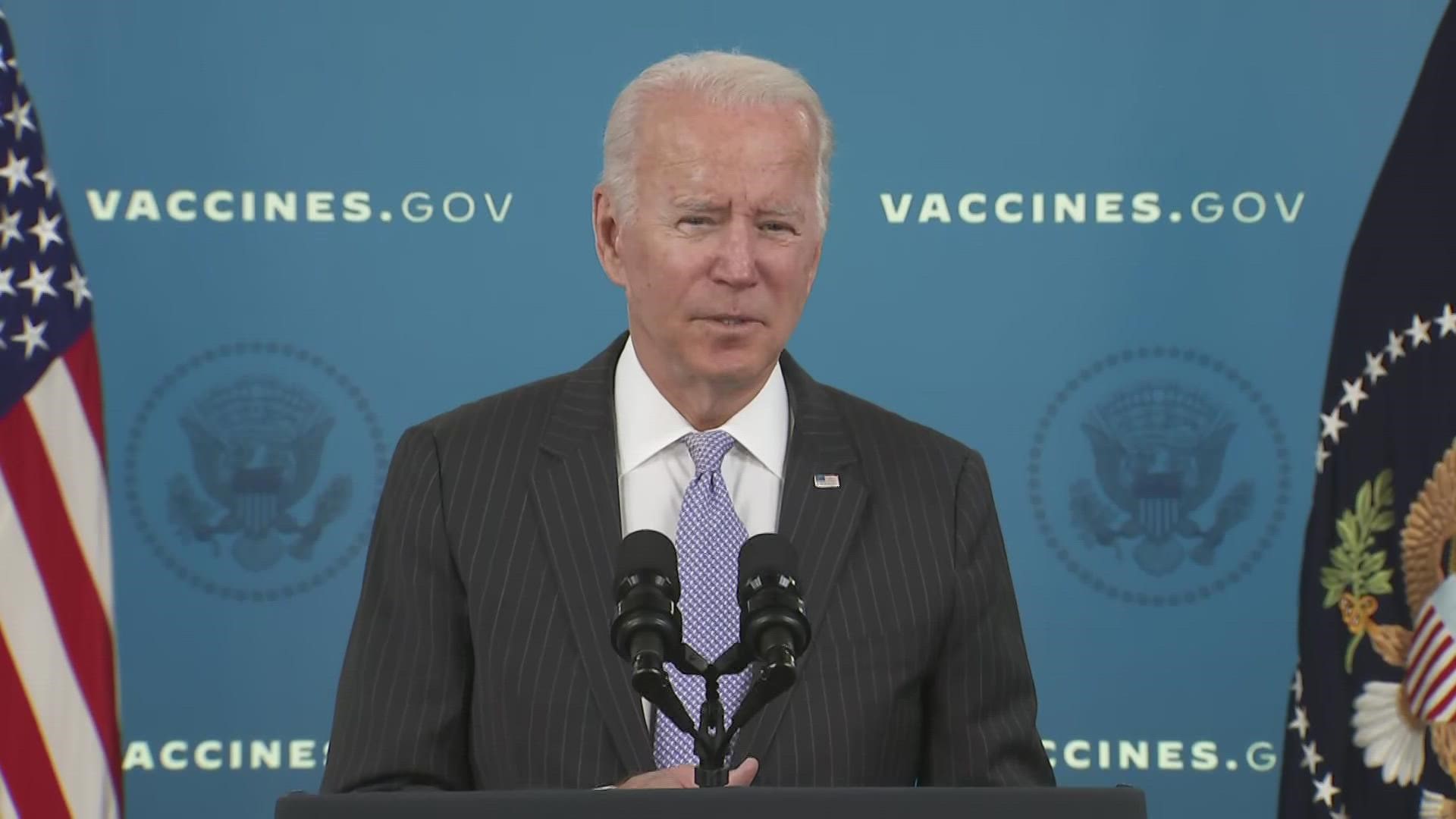 Brian Giglio, 40 of Alexandria, Virginia, brought his 8-year-old son Carter in for vaccination Wednesday morning at Children’s National Hospital in Washington, D.C. The boy has Type 1 diabetes that puts him at risk for complications if he were to become infected.

“Carter is the last in our house to get vaccinated and he was always the one that we had the most concern about,’’ Giglio said. “And so today is like a hallway pass for us to begin living life again and we couldn’t be more thankful to everybody that’s been involved in this process to helping us feel that freedom that we feel today.’’

Carter said he can’t wait to leave masks behind once he’s fully vaccinated, so he can smell the things he used to be able to smell without it. “I’m ready to trash it,” he said.

Cate Zeigler-Amon, 10, arrived with her mom and was first in line early Wednesday for a drive-through vaccination at Viral Solutions in Atlanta. The girl bounced around the car, her body hanging halfway out the window in excitement before the shot, which she broadcast live on her computer during morning announcements at her elementary school.

Afterward, Cate said she was “very, very, very excited and very happy,” looking forward to eating inside a restaurant, hugging her friends, and celebrating her birthday indoors next month “instead of having a freezing cold outside birthday party.”

Credit: AP
An excited Cate Zeigler-Amon, 10, hangs out of the car as she waits with her mom, Sara Zeigler, to receive her first dose of COVID-19 vaccine at the Viral Solutions vaccination and testing site in Decatur, Ga.

Kid-sized doses of the Pfizer-BioNTech vaccine cleared two final hurdles Tuesday — a recommendation from CDC advisers followed by a green light from Dr. Rochelle Walensky, director of the Centers for Disease Control and Prevention.

One girl squeezed her eyes shut and a little boy barely flinched as they got their shots and other waiting kids applauded, local media video showed.

“It feels like another important step on the journey to being able to vaccinate as many people as we can and put the pandemic to an end,’’ Arlia said.

Walgreens planned to start kids’ vaccinations at their pharmacies on Saturday and said parents could sign up starting Wednesday online or by calling 1-800-Walgreens. CVS was also accepting appointments online and by phone for vaccinations at select pharmacies starting Sunday.

The shots for schoolchildren mean sleepovers, playdates and family get-togethers put off for more than a year will be back on the agenda for many kids, along with a chance for fewer school interruptions.

“There are children in the second grade who have never experienced a normal school year,” Walensky said. “Pediatric vaccination has the power to help us change all of that.”

Credit: AP
Leah Lefkove, 9, waits as her dad Dr. Ben Lefkove prepares the first COVID-19 vaccine for her at the Viral Solutions vaccination and testing site in Decatur, Ga., on the first day COVID-19 vaccinations were available for children from 5 to 12 on Wednesday, Nov. 3, 2021.

Thousands of pediatricians pre-ordered doses, and Pfizer began shipments soon after the Food and Drug Administration’s decision Friday to authorize emergency use. Pfizer said it expects to make 19,000 shipments totaling about 11 million doses in the next several days, and that millions more will be available to order on a weekly basis.

The vaccine — one-third the dose given to older children and adults and administered with kid-sized needles — requires two doses three weeks apart, plus two more weeks for full protection to kick in. That means children who get vaccinated before Thanksgiving will be covered by Christmas.

“This is a big milestone for 5- to 11-year-olds because they make up nearly 40% of children under 18,” said Dr. Jennifer Shu, a Decatur, Georgia, pediatrician, who received her first shipment Tuesday morning.

“The timing before winter holidays is very fortunate,” she added. "This age group will be able to spend holidays with friends and family more safely than they have been able to since the start of the pandemic."

Kathy Zordan, 44, an insurance auditor in Morton Grove, Illinois, said she was “super excited” for her kindergartner, 5-year-old Liam.

"I told him, ‘Mommy got two shots, Daddy got two shots. This is why people are wearing masks. Hopefully at some point we don’t have to keep wearing the mask. You’re going to get the shots.’”

“He goes to school, he’s among hundreds of other kids every single day and I want him to have this protection," Zordan added.

Many locations planned mass vaccination events in coming days. And while many pediatricians’ offices were expecting strong demand at least initially, almost two-thirds of parents recently polled by the Kaiser Family Foundation said they would either wait or not seek out the vaccines for their kids.

Hannah Hause, a Colorado mother of four children ages 2, 5, 7 and 8, is among those not in any rush. She’s vaccinated but wants more time to see how the child vaccines play out and are studied in the larger childhood population.

“It’s not studied long-term. It just makes me nervous because that’s my whole world,” she said of her children.

Government authorities said pediatricians and family doctors, whom parents depend on to give routine childhood vaccinations, could help build trust.

Dr. Ada Stewart, a Black family physician in Columbia, South Carolina, works at a clinic for underserved patients that has been giving COVID-19 shots to grandparents, parents and teens and said she’s ready to add younger children to the mix. She’s seen the toll the virus has taken on them — not just in family illness and death but with school disruptions, slipping grades and mental strain.

School closures throughout the pandemic have disproportionately burdened children of color, widening academic gaps and worsening mental health, according to data presented Tuesday to CDC advisers. That data showed more than 2,000 COVID-related school closures in just the first two months of the current school year. Advocates say getting school-aged kids vaccinated will reduce those disruptions.

But Stewart thinks demand for kids’ shots will be mixed.

“Because many of my patients are Black, Indigenous and people of color, I’ve seen the full spectrum,’’ from parents eager to get their children vaccinated to those who are more hesitant “because of a history of mistrust in the medical community,’’ said Stewart, past president of the American Academy of Family Physicians.

Her message to both is the same: “Vaccines work, they’re safe, they’re effective and they save lives,’’ she said. “The more individuals that we can get vaccinated including our children, the sooner we will be able to get out of this pandemic.’’

A Pfizer study of 2,268 children found the vaccine was almost 91% effective at preventing symptomatic COVID-19 infections. The FDA examined 3,100 vaccinated kids in concluding the shots are safe.

Some skeptics have questioned the need for kids to get vaccinated since they are less likely than adults to develop severe COVID-19. But with the delta variant, they get infected and transmit “just as readily as adults do,’’ Dr. Anthony Fauci said at a recent White House briefing.

Since the pandemic began, at least 94 children aged 5 to 11 have died from COVID-19, more than 8,300 have been hospitalized and over 5,000 have developed a serious inflammatory condition linked to the coronavirus. Black and Latino youngsters and those with chronic conditions are among the hardest hit.

But while some health authorities say minorities should be over-represented in COVID-19 vaccine studies because they are disproportionately affected by the virus, nearly 80% of kids in Pfizer’s study were white. Black youngsters totaled 6%, Latinos 21%, Asians 6% and less than 1% were American Indian or Alaska or Hawaii natives.

Infected kids have contributed to the U.S. toll — almost 46 million infections and more than 740,000 deaths.

Credit: AP
Leah Lefkove, 9, shows off her vaccination sticker just before being the first child to be vaccinated at the Viral Solutions vaccination and testing site in Decatur, Ga.