Why fake vaccine cards are a public health risk

Making, selling or using a fake vaccine card is a federal crime. It's also a risk to public health in the COVID-19 pandemic. 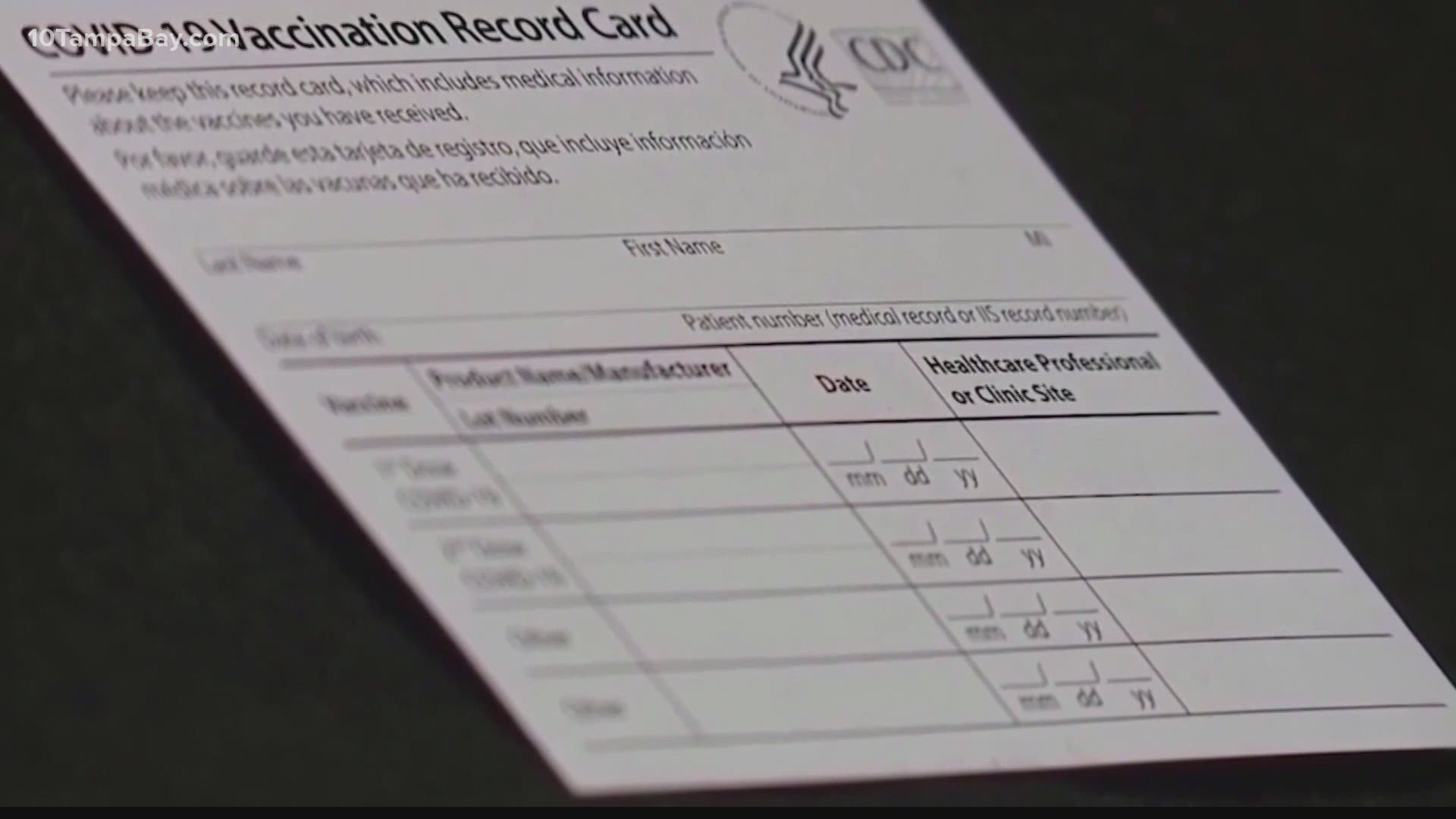 TAMPA, Fla. — As mask mandates are dropped around the country for people fully vaccinated against COVID-19, more businesses and organizations are requiring proof of vaccination.

Some people are turning to fake vaccine cards as their ticket to ditch the mask in places that require them. Not only is that against the law, but it also puts everyone, unvaccinated or not, at risk.

There have reports of bar owners selling fake vaccine cards, pharmacists stealing blank ones for people to fill out on their own and online shops selling stacks of replicas.

It's becoming enough of an issue that the FBI had to issue a warning to anyone planning to make, sell or use a fake vaccination card. It's a violation of federal law to use a government agency's seal (like the Centers for Disease Control) without authorization. Violating that law can land you fines or even jail time.

Florida's Attorney General Ashley Moody, along with others from more than 40 other states and U.S. Territories, signed a letter asking Twitter, Shopify and eBay to monitor and prevent the sale of fake vaccine cards on their sites. Multiple sales of fake or stolen blank vaccine cards were made on the online platforms.

While using a fake vaccine card is illegal and unethical, it's also a matter of public safety.

"If you have a lot of people giving them out and getting them and those people are not vaccinated and become positive, they become a risk to us, especially if they're traveling," explained Dr. Jay Wolfson, a professor of public health at the University of South Florida.

Dr. Wolfson says the issue spans across the globe. Many countries are considering proof of vaccination for travel. Although Governor Ron DeSantis already barred 'vaccine passports' in Florida, they're still a possibility for international travel outside of the United States.

"If someone were to get one of our vaccine cards, a fake one, and use it to come from a place like India with an outbreak and uncontrolled situation and go to Europe or the United States or another country, that's a huge problem. Remember, it only takes one positive case to start a new epidemic locally," said Dr. Wolfson.

Using fake cards within the United States is also an issue. With large numbers of people choosing to remain unvaccinated, there's a real possibility of new variants forming. "When you have a reservoir of unvaccinated people, that's where you create the variants. It allows the virus to mutate naturally. It's what viruses do and it's what this virus does really well," Wolfson explained.

Public health experts say the best thing you can do to protect yourself and others is to get vaccinated against COVID-19.