Board of Health to discuss alcohol curfew in Knox Co. to slow spread of COVID-19

The focus on stopping COVID-19 in Knox County is taking a more targeted approach as health leaders look to deter "super-spreading" events like house parties. 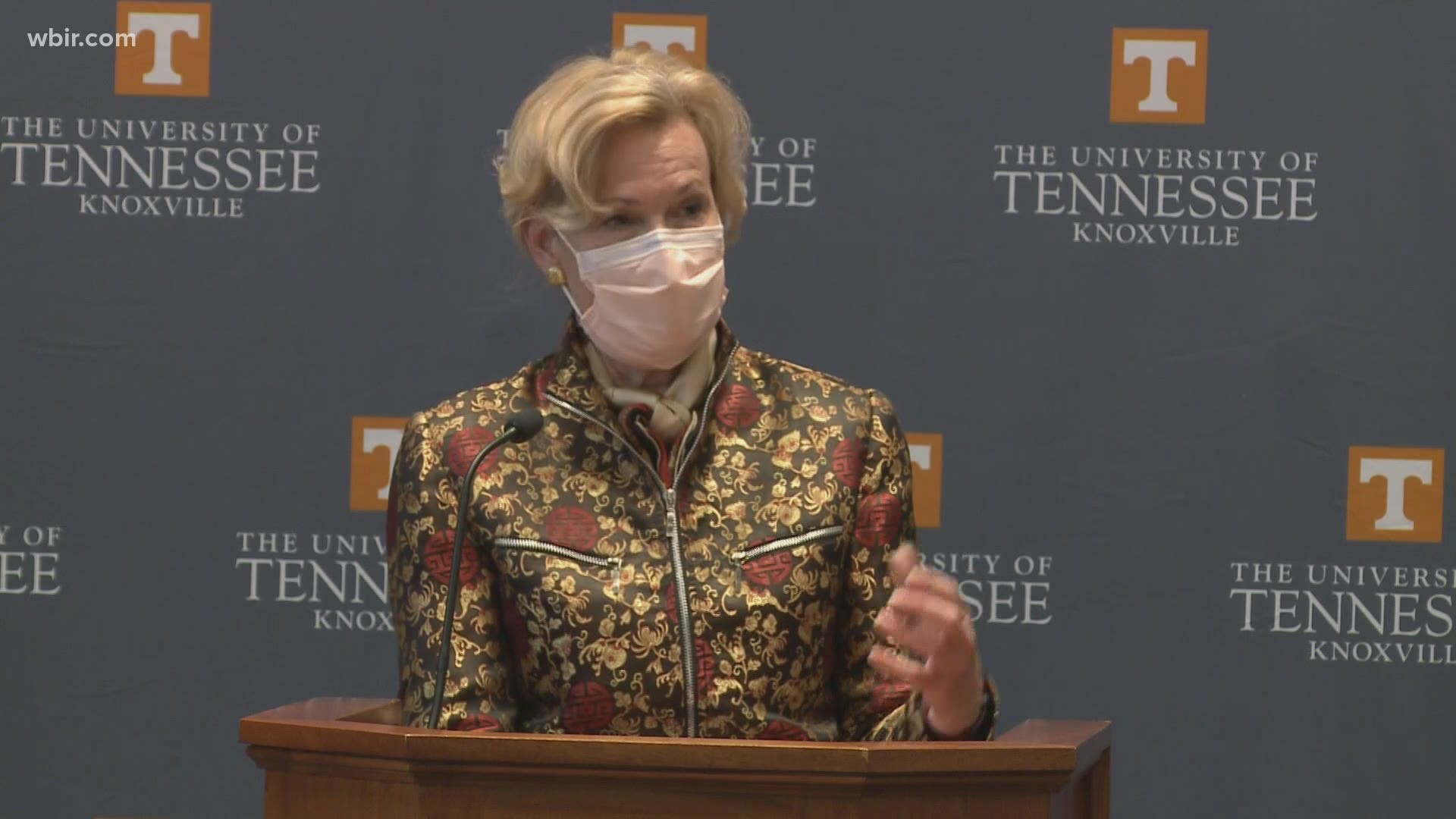 KNOX COUNTY, Tenn. — The Knox County Board of Health will discuss an alcohol sales curfew on the recommendation of Dr. Debrah Birx, a member of the White House Coronavirus Task Force.

Dr. Birx visited the University of Tennessee Tuesday as part of a round table to highlight both the successes and failures of the COVID-19 pandemic response locally.

Dr. Birx praised UT for its planning and response, saying efforts on campus have been highly effective so far in identifying cases quickly and keeping the spread of the virus to a minimum at university classes and activities.

UT Chancellor Donde Plowman said Tuesday in her regular online briefing with the UT community that Birx's visit was encouraging and "very inspiring."

However, roughly 80% of students do not live on campus -- and efforts taken to prevent the virus' spread among students have been less of a success, largely due to students not following guidelines, holding large house parties and crowding into bars near campus.

Cases have exploded in a short time among these students, and Birx had a message for those students not following simple recommendations: “You are creating super-spreader events."

These cases have, in turn, partially caused cases to rise outside students across Knox County at large.

"It’s both a responsibility and freedom to be in college. I think every student needs to understand it’s their responsibility not to participate in these super-spreader events," she said.

The problem with stopping the "super-spreading" is that efforts so far have been largely unenforceable outside campus efforts. Plowman said weeks ago she went door knocking on student homes that had been identified by UT Police for holding parties.

That's not stopping students off-campus from continuing to hold parties or rushing to the bars, though.

The Knox County Board of Health is now considering targeted measures it believes will help prevent "super-spreader" parties, including cutting off alcohol sales -- including outside of bars -- as early as 10 p.m. nightly. During the round table session, Dr. Birx told community leaders they've seen significantly decreased case counts in cities that have stopped the consumption of alcohol earlier in the night across the country.

"Find the measures that work"

The challenge posed by students disregarding even simple measures remains just as true with the public at large, as Birx said families and friends continue to let their guard down and spread COVID-19 to their loved ones unknowingly through parties and large household gatherings.

"We’re asking the community to cooperate, but it's not happening all the time," Knox County Department of Health Director Dr. Martha Buchanan said Tuesday.

The number of new COVID-19 cases hit another all-time daily high Tuesday after 225 new cases were reported in Knox County. Buchanan said the case counts are still going up because people are ignoring safety recommendations while hanging around their friends and family more.

"The virus spreads depending on human behavior," she said. "COVID is real. Please listen. Please cooperate."

Birx said asymptomatic spread has been the primary driver for the COVID-19 outbreaks that started across the South over the summer, saying the initial waves were caused by people going on vacation without heeding any measures to prevent spread -- such as staying physically distant from others and wearing a mask in public.

She said she believes one of the largest reasons people were unguarded or reluctant to follow recommendations, despite the daily warnings, more than 100,000 reported deaths, and numerous measures taken, had to do with the initial outbreak in the Northeast that led to the extreme lock down measures taken across the entire U.S. in March.

Birx said most people outside the Northeast and large metropolitan areas saw the initial measures as extreme and unnecessary, as COVID-19 had not reached a level of spread in their communities at that point that would have warranted such a lock down.

While the lock down initially cut off the virus' spread outside the worst-hit outbreak areas, it led many to lose faith in the public health response that was to follow when the reopening process began -- and COVID-19 began spreading silently and rapidly through their communities.

Birx said measures such as mask mandates have helped tremendously in halting community spread of the virus from stranger-to-stranger, but masks do little to stop the threat of spread between family and friends because, reasonably, people do not wear them when spending time solely around of loved ones.

For that reason, the main recommendation she had is that family and friends need to understand "social distancing" needs to be "physical distancing." It's easy for people to spread out and keep their distance in public to limit spread between strangers, but not so much inside their homes. Activity between friends, in particular, needs to be limited or tailored in ways that they can stay at least six feet apart.

In short: "No house parties."

On top of that, Birx and Buchanan said many still remain ignorant of the threat asymptomatic spread poses in their community, and how it is causing COVID-19 to spread between family and friends. This has prompted leaders to tailor strategies in ways that take people's reluctance to abide by recommendations and rules into account: Focus on simple preventative measures that people will actually follow.

"If you make a restriction that the community won’t follow, it doesn’t help to mitigate spread," Birx said. "We all have to work together at this."

Bars and alcohol sales have been at the center of the most recent measures. A 10 p.m. curfew is in place for bars for at least another week, but that has been difficult to enforce and does not discourage house parties.

Buchanan said stopping all alcohol sales at 10 or 11 p.m., including in stores, has had a significant impact on reducing case counts in places that have implemented it. For that reason, she said the data supports taking that action here in Knox County. The board of health is set to meet again Wednesday to discuss such measures.

Stopping the spread at UT

Birx said stopping classes is the one thing UT cannot and should not do to stop the spread of COVID-19 right now.

"Closing university completely and going online would be the most dangerous thing," she said, pointing to the fact 80% of students do not live on campus.

The reason, she said, is because the university itself is providing isolation, resources and support for students, and more importantly is acting as a large set of "eyes" to quickly identify cases before the virus can spread further. Moving to online-only would remove the "eyes" the university has, increasing the risk of unchecked spread all-around.

Chancellor Plowman and Dr. Spencer Gregg, director of the Student Health Center, addressed several steps UT is taking this week and in the coming weeks to get a better sense of the virus’s presence on campus. That will include nasal swab testing and pooled saliva testing of students in housing.

Last week, all students moving out of Massey Hall were giving nasal swab, or PCR, test to check for positivity. The rate was between 7 and 8 percent, Gregg said. That’s encouraging news because it’s not as high as what was expected.

Massey Hall is going to be used as an isolation and quarantine center for students.

On Thursday, UT will conduct nasal swab testing of students living in Magnolia Hall. That’ll be done by “self-collecting kits” that will be given to residents.

Separately, UT will be gathering saliva samples from students who live in Hess Hall. Those results will help give authorities a better sense of any trends that may be developing.

By early next week, Gregg said, the plan is to share with the community what the testing results reveal so far.

Plowman made a point Tuesday of reminding students to avoid crowded, indoor spaces such as bars and house parties.

“Spend time outside as much as possible,” she said.

Large gatherings are a major source of spread, Gregg said.

Case counts released Tuesday morning show a total of 645 positive, active cases in the UT community including 630 students. That’s a small decrease from the day before.

For the first time, Plowman offered specifics on staff infections. There are 15 employees with COVID-19, including 14 staff members and one faculty member. It was expected that as children went back to school case counts would go up among UT employees, Plowman said.

Gregg said in the coming days the community will get a better idea if positive cases grew over the Labor Day weekend. UT held classes on Labor Day, normally a day off for everyone.

UT's eye next turns to the Thanksgiving holiday, where the risk of students unknowingly bringing home COVID-19 and infecting family and friends will be much higher. To combat that possibility, UT said it will be working to expand testing to more students going into the fall before they head to break, as well as when they return to ensure they aren't bringing COVID-19 to campus.

"We think that is going to be critical – we can’t rely on symptoms as our soul indicator of cases in the community," Birx said. "Half or more those are asymptomatic in students."