As some states ease lockdowns, US COVID-19 death toll passes 50,000

Here is a look at some of the latest news on COVID-19 from the U.S. and around the world on Friday. 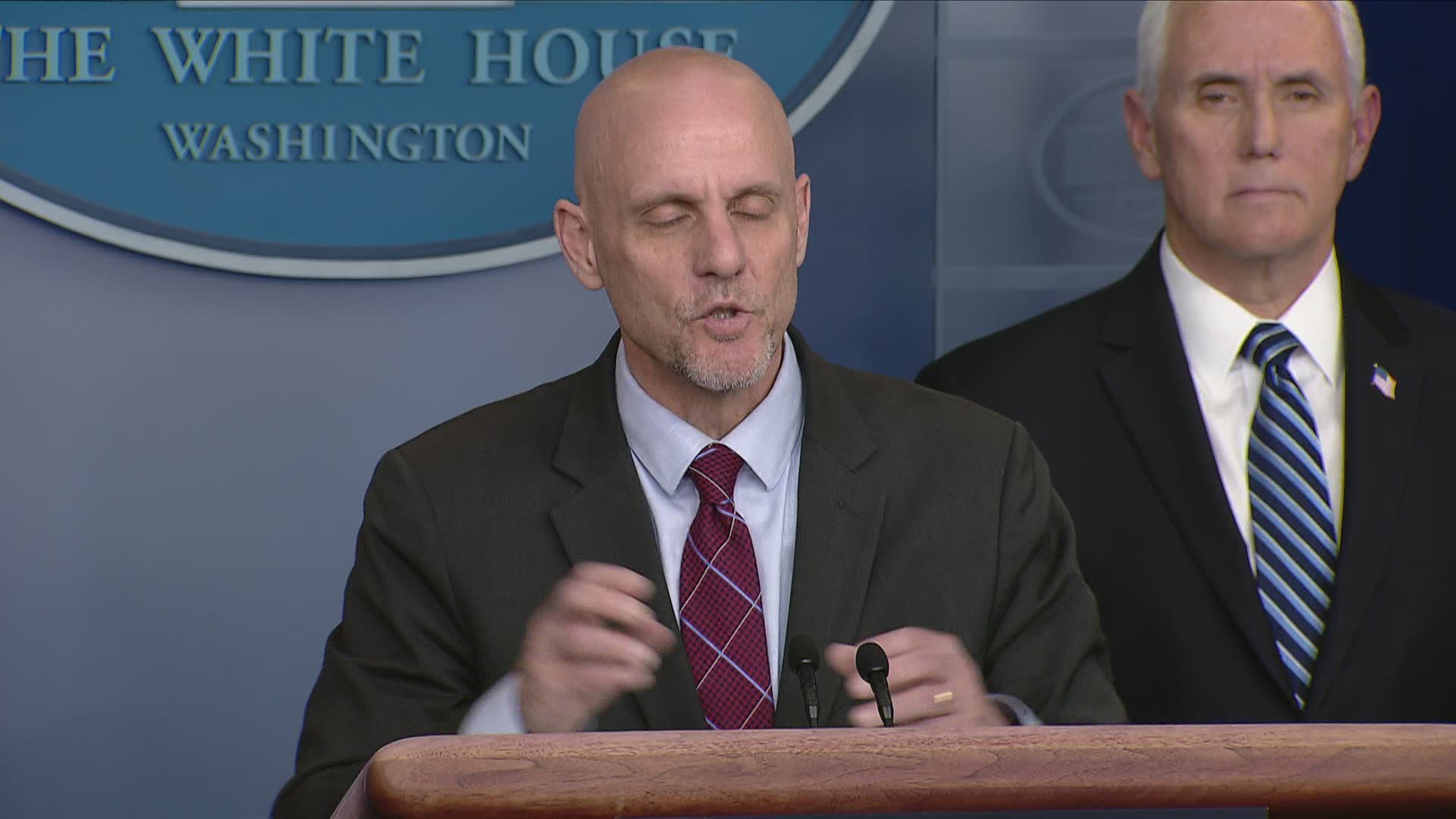 WASHINGTON — This article contains ongoing U.S. and international updates on the COVID-19 pandemic and its effects. Here are some key updates for Friday, April 24, 2020. You can find more details by scrolling through the story.

There were more than 890,500 confirmed cases of COVID-19 in the United States around 11:00 p.m. EDT Friday, according to Johns Hopkins University. There have been more than 51,000 deaths in the U.S., with 96,000 recoveries. Over 4.6 million tests have been conducted nationwide.

Even as the confirmed U.S. death toll from COVID-19 soared past 50,000, Georgia, Oklahoma and Alaska began loosening lockdown orders on their pandemic-wounded businesses. They did so despite warnings from health experts that the steps toward normalcy might be happening too soon. Republican governors in Georgia and Oklahoma allowed salons, spas and barbershops to reopen Friday, while Alaska opened the way for restaurants to resume dine-in service and retail shops and other businesses to open their doors, all with limitations. The reopenings mark a symbolic milestone in the debate raging worldwide as to how quickly political leaders should lift lockdown orders.

Worldwide, there have been over 2.7 million cases, and more than 195,000 people have died.

For most people, the virus causes mild or moderate symptoms, such as fever and cough, that clear up in two to three weeks. For some, especially older adults and people with existing health problems, it can cause more severe illness or death.

RELATED: Coronavirus pushes US unemployment toward highest since Depression; Trump to sign $500B aid bill

The minor league pitcher whose career inspired the creation of Nuke LaLoosh in the movie “Bull Durham” has died. Steve Dalkowski died Sunday in New Britain, Connecticut. His sister says he had several pre-existing conditions that were complicated by COVID-19.

Dalkowski never reached the major leagues but was said to have thrown well over 100 mph. Lack of control was his downfall. In one minor league season in 1960, he struck out 262 and walked 262. Steve Dalkowski was 80 years old.

President Donald Trump cut off a coronavirus task force briefing for the first time without taking any questions from reporters. It may not be the last time, however. There have been discussions within the White House about changing the format of the briefings to curtail the president's role.

The briefings have become nightly staples and often stretch an hour or more and feature combative exchanges between Trump and reporters.

For weeks, advisers have been urging the president to scale back his appearances at the briefings, saying that he should come before the cameras only when there is major news or a positive development to discuss, according to the officials. Otherwise, they suggested, he should leave it to Vice President Mike Pence and health officials to take the lead.

Trump conducted the 22-minute briefing Friday evening after he had mentioned Thursday injecting disinfectants into people as a way to battle COVID-19. There are reports of people calling hotlines to ask about the internal use of disinfectants and the makers of Lysol and Clorox issued warnings.

Trump says his comments were misrepresented and that he's only posing ideas to battle the virus, but historians say a president's words carry such weight that musings are dangerous, especially during a pandemic.

A reporter could also be heard asking the president on his way out if sarcasm is appropriate now.

Many of the White House task force news conferences have been at least two or three hours long.

Trump’s tendency to toss out unproven and even far-fetched ideas for fighting COVID-19 is triggering an outcry from public health officials. It also raised questions about whether Trump recognizes the unique power and responsibility that comes with the presidential pulpit.

RELATED: VERIFY: Do not ingest or inject disinfectants under any circumstances

Credit: AP
President Donald Trump and Vice President Mike Pence leave at the end of a briefing about the coronavirus in the James Brady Press Briefing Room of the White House, Friday, April 24, 2020, in Washington. (AP Photo/Alex Brandon)

A recession caused by the coronavirus pandemic and a government spending spree on testing, health care and aid to businesses and households will nearly quadruple the federal budget deficit to $3.7 trillion, the Congressional Budget Office said Friday.

Among the legacies of the outbreak, a CBO report says, is a pile of trillions of dollars of debt, amassed by a political system that has proved incapable of taking even small steps to constrain this problem.

The 2020 budget deficit will explode after four coronavirus response bills passed by Congress and signed by President Donald Trump promise to pile more than $2 trillion onto the $24.6 trillion national debt in just the remaining six months of the current fiscal year, according to the report.

The CBO said lawmakers eventually will be forced to tackle the government’s chronic financial woes, if for no other reason than the looming insolvency of Social Security and Medicare.

The report is full of gloomy economic news, predicting a devastating hit to the economy this quarter at an annualized rate of decline of 40%, accompanied by a 14% unemployment rate.

President Donald Trump says his comments suggesting people can ingest or inject disinfectant to fight COVID-19 was an attempt at sarcasm.

Trump noted Thursday that researchers were looking at the effects of disinfectants on the virus and wondered aloud if they could be injected into people, saying the virus “does a tremendous number on the lungs, so it would be interesting to check that.”

But speaking to reporters in the Oval Office Friday, Trump insisted his comments were misconstrued. “I was asking the question sarcastically to reporters like you, just to see what would happen,” Trump said.

Trump’s comments on disinfectants at Thursday’s briefing came after William Bryan, who leads the Science and Technology Directorate at the Department of Homeland Security, spoke about how researchers are testing the effect of disinfectants on virus-laden saliva and respiratory fluids on surfaces.

UFC to offer 3 shows without fans in Florida

The UFC is returning to competition on May 9 with three shows in eight days in Jacksonville, Florida.

The mixed martial arts promotion is determined to return to action after postponing and canceling several shows due to the coronavirus pandemic.

UFC 249 will be held May 9 at VyStar Veterans Memorial Arena in Jacksonville with no fans in attendance. The postponed pay-per-view show will still be headlined by Tony Ferguson’s interim lightweight title bout against Justin Gaethje.

UFC President Dana White also plans to hold shows on May 13 and May 16 at the same arena in Florida.

President Donald Trump has signed a $484 billion bill that aids employers and hospitals under stress from the coronavirus pandemic.

The outbreak has killed more than 50,000 Americans and devastated broad swaths of the economy.

The bill is the latest effort by the federal government to help keep afloat businesses that have had to close or dramatically alter their operations as states work to slow the spread of the virus.

Easy passage of this aid installment belies a potentially bumpier path ahead for future legislation.

Anchoring this bill is the Trump administration’s $250 billion request to replenish a fund to help small- and medium-size businesses with payroll, rent and other expenses.

New York has reported its lowest number of daily COVID-19 deaths in weeks.

The state recorded 422 deaths as of the day before. That’s the fewest since March 31, when it recorded 391 deaths. More than 16,000 people have died in the state from the outbreak.

Gov. Andrew Cuomo says the figures are still at “an unimaginable level, and it’s dropping somewhat,” but says it is still “devastating news.”

The total number of people hospitalized statewide continues to drop slowly, hitting about 14,000. But Cuomo says the number of new patients coming into hospitals is basically flat.

EPA says only use disinfectant on surfaces

The Environmental Protection Agency is reminding people to only use disinfectant on surfaces.

The EPA issued the update after President Donald Trump suggested it might be helpful to inject disinfectant to combat the coronavirus.

The EPA says, “Never apply the product to yourself or others. Do not ingest disinfectant products.”

William Bryan of the Department of Homeland Security said at a White House briefing on Thursday “emerging results” from new research suggest solar light has a powerful effect in killing the virus on surfaces and in the air.

But he said there was no consideration of the internal use of disinfectants. Trump’s hypothesis drew a flood of comments on Twitter.

RELATED: Somber Congress, many in masks, pass almost $500B more in coronavirus aid

The Pentagon says the USNS Comfort, a Navy hospital ship that has been in New York harbor for several weeks to help fight the coronavirus, will return to its home port of Norfolk, Virginia.

Pentagon spokesman Jonathan Hoffman did not say when the ship would depart New York. Once it is back in Norfolk, it will restock and prepare to deploy again if requested. Hoffman says it will be up to the Federal Emergency Management Agency to decide whether the Comfort should undertake a coronavirus support mission elsewhere.

Japanese government spokesman Yoshihide Suga said Friday quality checks were being carried out on all the masks being doled out to every household after some turned out to be dirty and defective.

“We are checking very carefully,” he told reporters, while stressing the masks are meant to ease people’s worries about COVID-19.

Kowa Co., a textile and medical equipment company, and trading company Itochu Corp. apologized Thursday, saying the masks they supplied the government were defects and are being recalled.

The handouts to 50 million households, have been pejoratively dubbed “AbenoMask” by the Japanese public, a take on Prime Minister Shinzo Abe’s “Abenomics” economic policies.

The reusable cloth masks come in packages of two and are delivered in mailboxes. Japanese media reports said some were stained or moldy, or had bugs in the packaging.

India’s prime minister says the country’s 1.3 billion people are bravely fighting the coronavirus epidemic with limited resources and the lesson they have learned so far is that the country has to be self-sufficient for meeting its needs.

Addressing the country’s village council heads through video conferencing on Friday, Prime Minister Narendra Modi says the country can’t afford to look outward to meet a crisis of this dimension in the future.

Self-reliance is the biggest lesson taught by the epidemic, Modi said.

India has so far reported 22,358 positive novel coronavirus cases and 718 deaths. India has been importing critical medical supplies, including protective gears, masks and ventilators from China.

Alluding to low casualties as compared to other countries, Modi said that the country’s efforts to win the battle against the pandemic through a strict lockdown imposed on March 25 and social distancing is being appreciated by other countries. The country-wide lockdown is due to end on May 3.