Pat James, 77, was tested Saturday, a day before he died. His is the first confirmed death related to the novel coronavirus in Tarrant County. 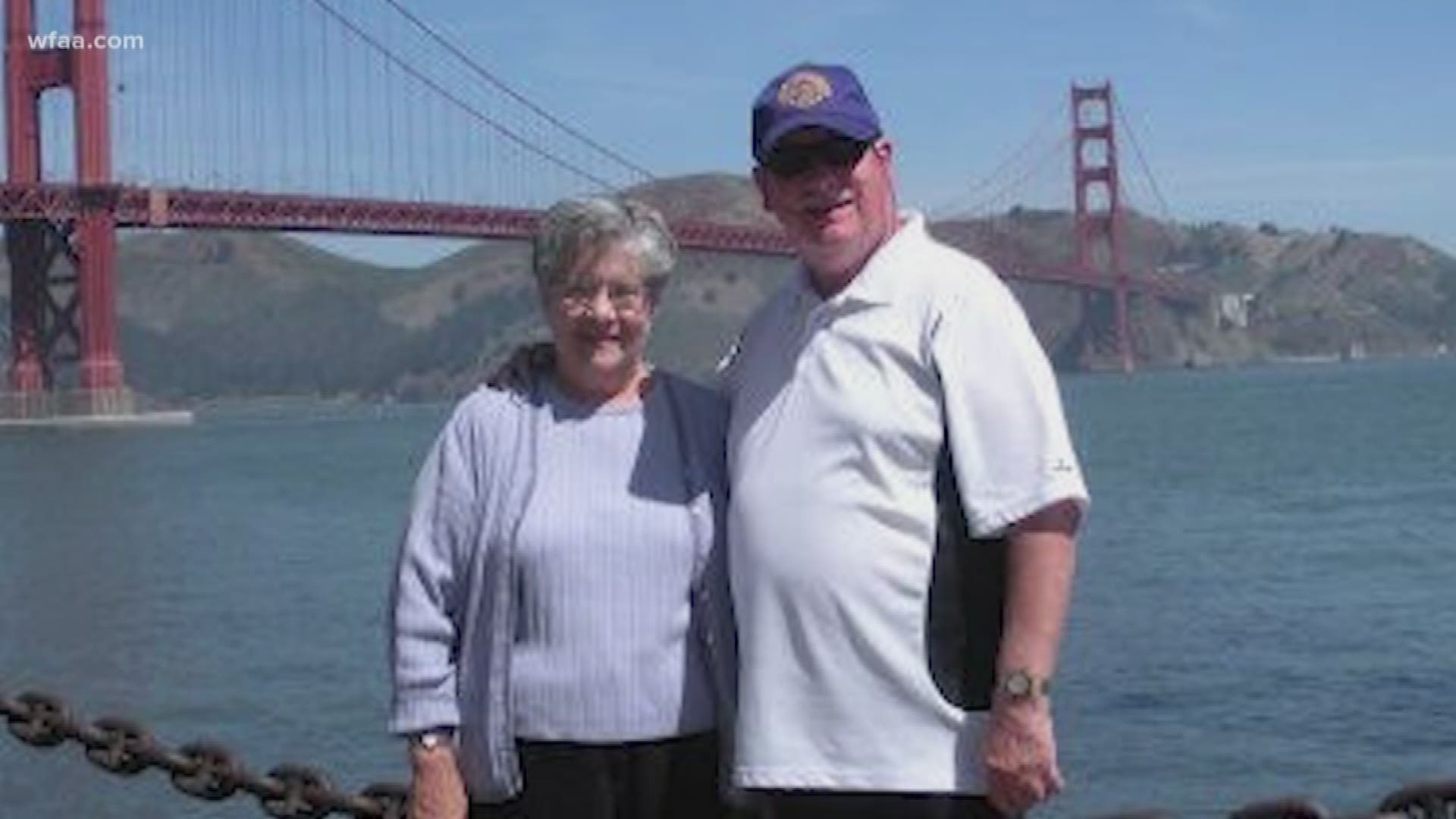 Updated at 1:21 p.m. Wednesday with information about the Texas governor.

A test confirmed that an elderly Arlington man, who died Sunday, had COVID-19, according to the man’s family and the Tarrant County Health Department.

Pat James, 77, underwent testing for COVID-19 Saturday, a day before he died. His is the first confirmed death related to the novel coronavirus in Tarrant County.

For weeks, James got sicker.

He and his wife, Jean, lived in a duplex at the Texas Masonic Retirement Center in Arlington.

Family members said Jean has also been sick, having trouble breathing and showing the same symptoms as her late husband. The retired teacher was in self-quarantine at the couple’s duplex as of Tuesday afternoon.

On Wednesday, Gov. Greg Abbott was in Arlington for a news conference with Arlington Mayor Jeff Williams and Tarrant County Judge Glen Whitley.

He said every person at the retirement home will be tested for COVID-19.

Credit: Courtesy the James family
Jean James was placed in quarantine after her husband fell ill and later died.

Jean James’ son, Greg Brandt, told WFAA that he is hopeful his mother will recover because her symptoms aren’t as severe as her husband’s were. But he said health officials needed to be ready to “move fast to track” the couple’s contacts and “get them to realize how serious it is that they isolate themselves.”

County health officials said in a statement that they will now “work closely with the retirement center administration to assess other residents and staff.”

The statement also said that the county was trying to determine the “possible source of the infection and determine who the patient may have come in contact with while he was ill so that any contacts can be appropriately isolated, monitored for symptoms and tested as needed.”

The symptoms of COVID-19 include cough, fever and shortness of breath. It can lead to bronchitis and severe pneumonia.

To date, officials have said there are at least seven confirmed cases of COVID-19 in Tarrant County, including James.

James' family said they believe the numbers are far higher because so many people have not been able to get tested or it takes so long to get the results back.

They told WFAA on Monday about their frustration with the slow test results. They said they worried about how many people, including family members, could have been exposed.

Pat James had been sick for weeks and had tested negative for the flu. Last Tuesday, James was taken by ambulance to a hospital, where he was diagnosed with double pneumonia and was put under quarantine.

In desperation to get the results, Shelley Brandt contacted the Tarrant County Health Department and the Centers for Disease Control and Prevention trying to find out the test results.

The family received the results of that test Tuesday afternoon, confirming their worst fears.

The Brandts said they were frustrated that his James' was not expedited, given his age and the symptoms he was exhibiting.

They say Jean James is concerned people she’s come in contact with.

“The first thing she said in that text was ‘I’m sorry,’” Shelley Brandt said. “She can’t be sorry. She didn’t know. Nobody knows.”

Gary Blair, superintendent of the Texas Masonic Retirement Center, told WFAA Monday that that the facility began quarantining residents last Wednesday. He said they did so not as a result of the man’s illness but out of an abundance of caution.

“We were doing these things before it was ever recommended by the CDC,” Blair said. “We are trying to stay in front of it. We’re doing everything possible to keep our residents safe.”

Texas health officials ordered this week that all of the state's 1,200 nursing homes remain under quarantine, mandating that non-essential people be barred from the facilities. More than 90,000 people live in nursing facilities in Texas.

Officials are trying to prevent a similar outrage as the one that claimed the lives of about 20 seniors in a Seattle-area nursing home.

The Brandts said they still can't visit Jean James to comfort her as she grieves the loss of her husband.

“We still can’t go hug her and tell her how sorry we are," Shelley Brandt said. "We’ve got in a catch-22 of this whole pandemic and it’s just sad.”