Haywood County has a population of roughly 17,500 people. More than 7,000 voted in the 2020 presidential election and it’s been a blue leaning county for decades. 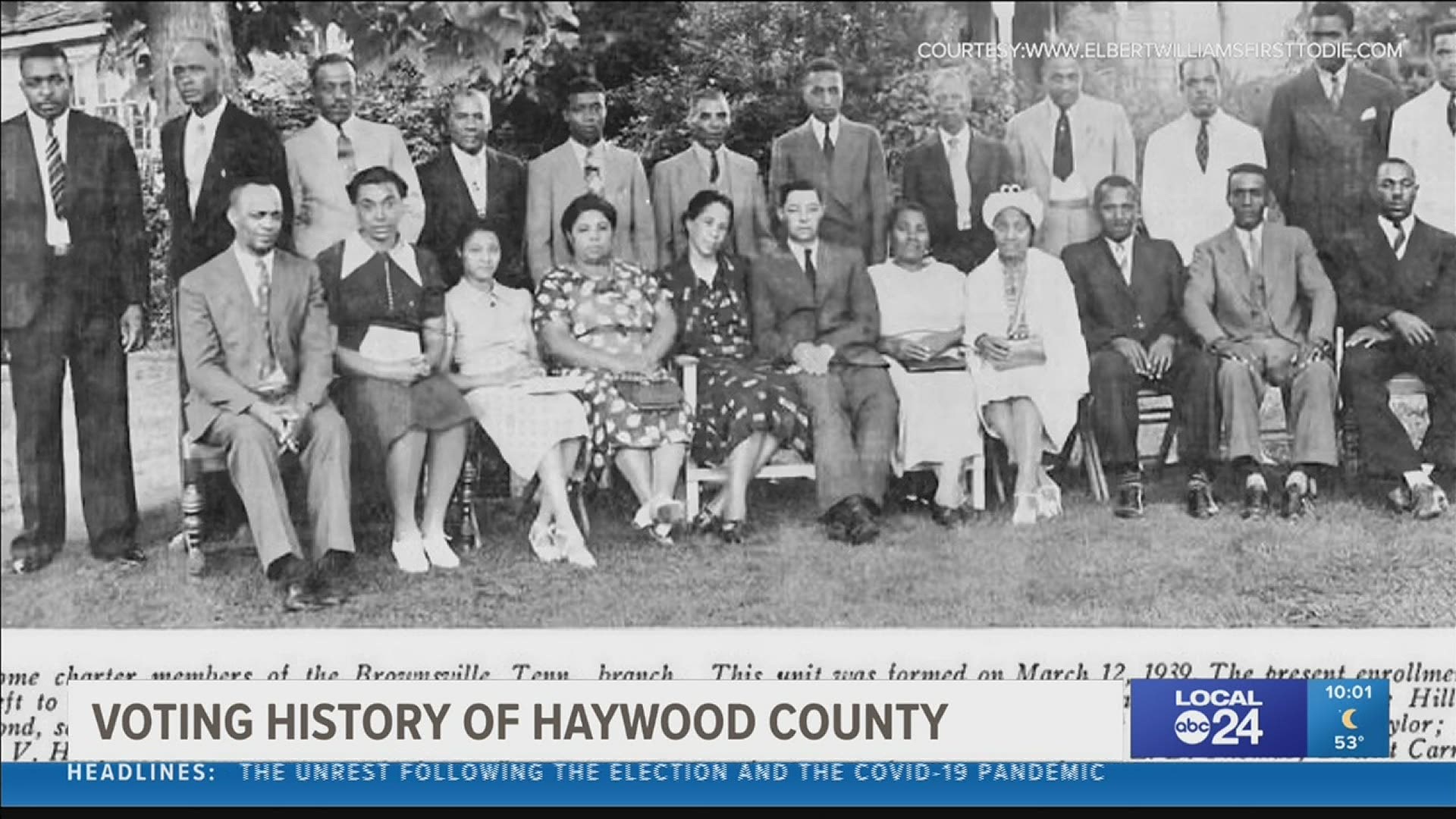 In a sea of conservative states, most voters in Haywood County have been voting democratic since 1960s and Local 24 News did some digging to find out why.

Haywood County has a population of more than 17,000 people. More than 7 thousand people cast their ballots last week, mainly democratic. Back in 1940, there was a team of people from the Haywood County NAACP working to get Blacks the right to vote. And some even lost their lives doing so.

“Everyone who was attached to that NAACP branch was terrorized in some sort of way,” said Leslie McGraw, the great grandniece of Elbert Williams.

Elbert Williams was one of the founding members of the 1939 chapter of the Haywood County NAACP.

In June of 1940, he was questioned by the local sheriff’s department about his involvement with helping to get blacks registered to vote. His body was found three days later in the Hatchie River.

VOTING RIGHTS IN HAYWOOD Co. - Last week we witnessed a historic election. Our research brought us to the story of Elbert Williams, a founding member of the Haywood County NAACP, murdered in 1940 because he was trying to get blacks registered to vote. More at 10 @LocalMemphis pic.twitter.com/dZKaB9lbSy

“When you are the man of the house and you’re taken out like a little kid...that brings shame to the situation that people carried through the generations. So, I didn’t grow up with family talking about oh our great grand uncle Elbert was a hero it was hushed,” McGraw explained.

During that time, Williams friend Thomas Davis and his brother Elisha Davis were also questioned about their works with the same NAACP chapter, but they escaped unharmed.

“Most of the African Americans the majority in Haywood County were sharecroppers so when they started exercising their rights and trying to register to vote they were put off the land,” said John Ashworth, Chair of the Elbert Williams Memorial Committee.

Although Williams death happened in 1940, African Americans in this county wouldn’t receive voting rights until the 1960s.  The NAACP chapter of Haywood County went inactive for two decades before reestablishing itself in 1963.

“And you can see the pride that they take in doing that because these are people that had the iron foot of oppression on them all of their life, them, their ancestors so the opportunity they have now to exercise that right.  They took advantage of that,” Ashworth said.

As for the Williams family, the trauma of Elbert’s death still remains.

“That fear and that terror, that trauma splinters everywhere the family splintered,” she said.

I spoke exclusively via zoom to Elbert Williams Great Grand Niece, Leslie McGraw. McGraw says the trauma stemmed from her great grand uncle’s death was passed from generations to generations. Her grandma often didn’t want to speak about it. It was always hushed. @LocalMemphis pic.twitter.com/OYJrTGkK6D

However, McGraw can sleep a little better at night knowing her great grand uncle’s death wasn’t in vain.

“I’m excited about changing the conversation from him being a lynching victim, but he was also a voting rights hero...he paid the ultimate sacrifice,” McGraw stressed.