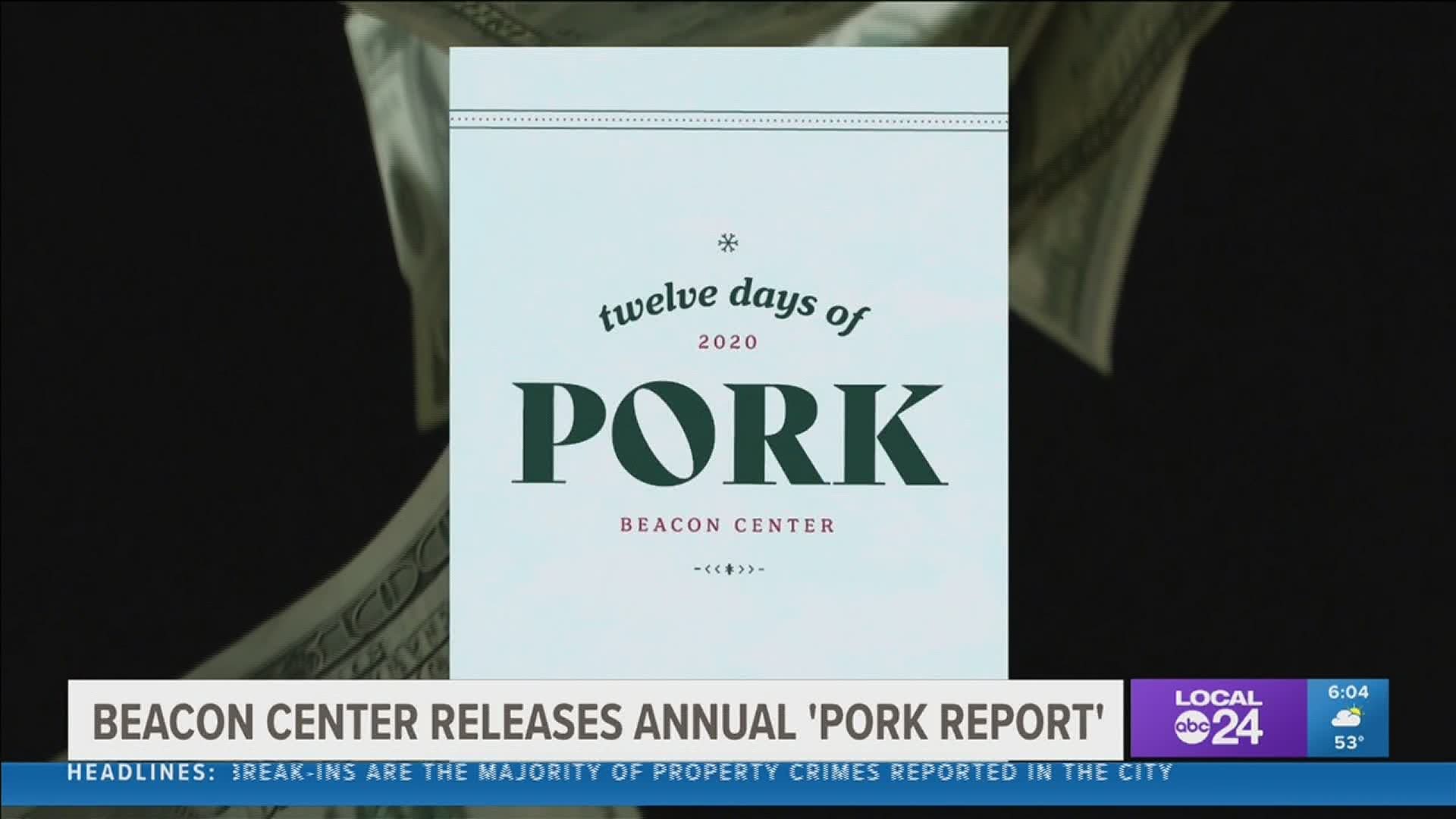 MEMPHIS, Tenn. — We are just weeks away from Christmas, which means tis the season for the Beacon Center of Tennessee's annual pork report.

This year, the government watchdog group named it "The 12 days of Pork." The annual report highlights what the group says is a combination of mismanagement, incompetence, and waste by governments in Tennessee.

From the $2 million in taxpayer money given to financial guru Dave Ramsey to expand his headquarters in Franklin Tennessee, to the $8 million no bid contract for COVID masks, the Beacon Center's "12 days of Pork "breaks down how your tax money was spent and/or wasted depending on how you feel about it."

In West Tennessee, the report points out the taxpayer money being spent on the Jackson Generals minor league baseball team. According to the report, the city's taxpayers are getting played.

"The Jackson Generals one was one of the most astounding ones we've seen, only because if you look at the pure number of tax dollars that went - for every $50 paid in taxes, $1 went to the Jackson Generals - that's a huge number," said Beacon Center spokesperson Mark Cunningham.

The pork report also takes aim at the EDGE board of Memphis and Shelby County for handing out tax incentives for the filming of Bluff City Law. The final episode may have aired in November of 2019, but taxpayers were still on the hook for $1.4 million in 2020 despite the show being cancelled.

"You have to wonder why Memphis EDGE decided to give $1.4 million, giving them money even after the show was already cancelled. It doesn't make any sense to us. It's a terrible return on investment."

A spokesperson for the EDGE board said the tax break was approved because it had great support from the community and local leaders. It was approved in August 2019 and went into effect December 31, 2019, and will run until the end of 2020. Since the show was cancelled, we're told the tax break will not continue.

The pork report also criticized Shelby County for how it handled the county's finances since the COVID-19 outbreak began. While the commission first agreed to a freeze on new hires and promotions to save money, the commission did a reversal a month later.

On the first day of Christmas, the government gave to me... a bigger building for @DaveRamsey.

Read more about it here: https://t.co/Za1Up6AbRu

RELATED: Over $200 million of taxpayer money wasted in Tennessee in 2019, according to report

It's not just Memphis pork. The report also highlights waste in in Chattanooga. According to the report, the city purchased $6 million in new traffic lights in 2013, then never installed them.

The "pork of the year" award this year went to the city of Nashville and its 34% property tax increase. Despite being one of the hottest cities in the country, it is still in massive debt.

The report said instead of making reforms to fix the budget, the mayor and city council raised residents' property taxes.

2020 Pork Report
To see sources for each entry, click on the title of the entry. Finance guru Dave Ramsey once said, "For your own good, for the good of your family and your future, grow a backbone. When something is wrong, stand up and say it is wrong, and don't back down."