Some are questioning if the purchase was a good use of taxpayer money, noting the company behind the systems is at center of federal lawsuit. 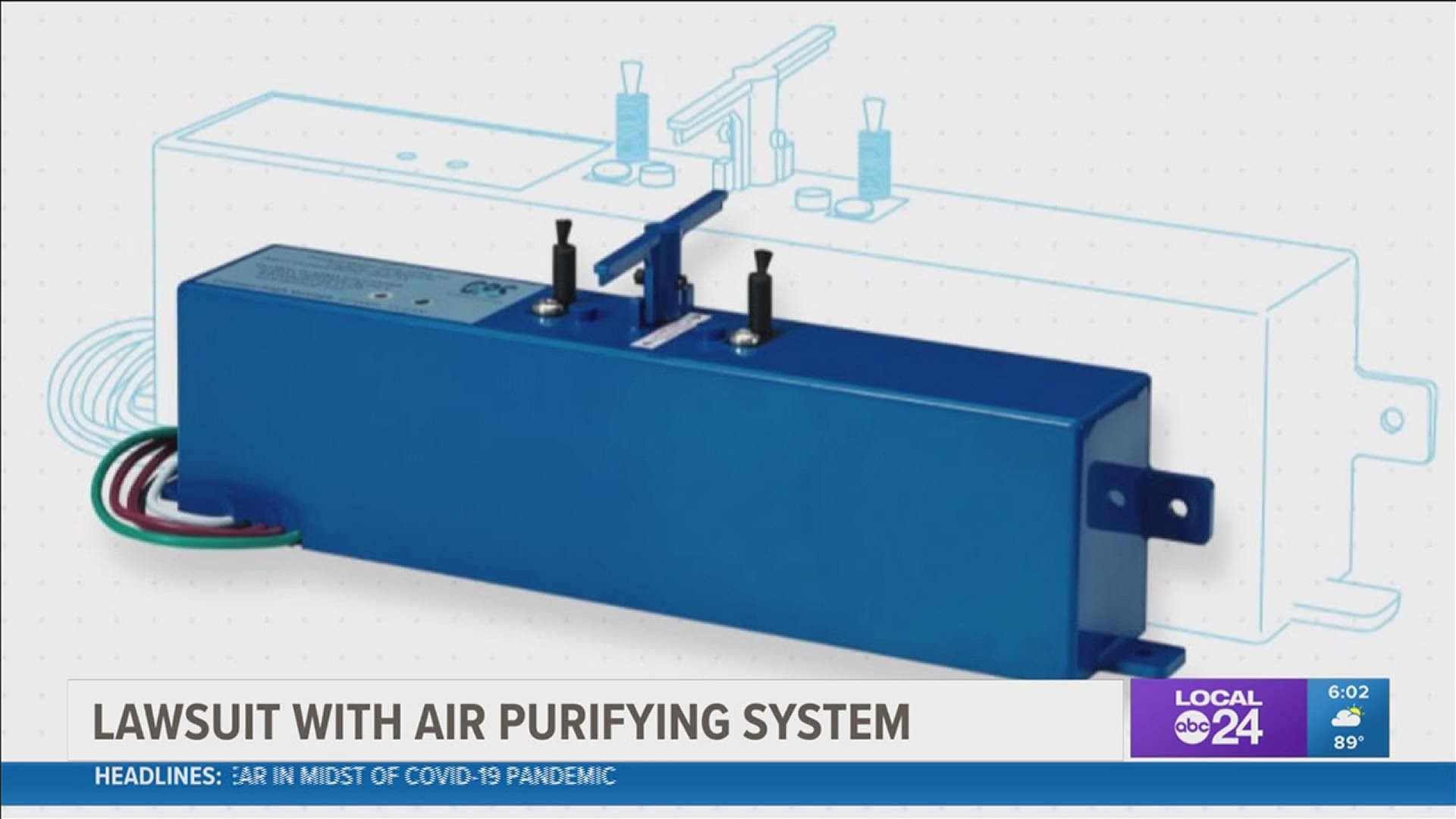 MEMPHIS, Tennessee — You paid for it! More than $25 million was spent to install air purifying systems at the Shelby County Jail and Shelby County Schools to stop the spread of COVID-19.

Some have questioned if it was money well spent.

Global Plasma Solutions’ lab testing showed its devices inactivated almost all of the active coronavirus in the air, but the company and its ionizing machines are at the center of a federal lawsuit.

"Any time you have a large quantity of money that the government is throwing out, there is a tendency for that to be wasted," said Shelby County Commissioner Mick Wright.

According to the company's website, the "patented needlepoint ionization technology safely introduces ions into the airstream using airflow in your ventilation as your delivery system." A video explains as ions are spread through the room, pathogens are destroyed.

But a recently filed lawsuit questions its effectiveness.

Boeing's study has been cited in a federal lawsuit which charges that Global Plasma Solutions makes “deceptive, misleading, and false” claims about its products based on company-funded studies that are “not applicable to real world conditions.” https://t.co/xy2xz6bz6C

According to the lawsuit, the company preys on people desperate to cleanse the air and protect themselves from COVID-19, and uses deceptive marketing tactics.

"What we do know is they have spent money on unproven technology," said Josh Spickler.

Spickler runs Just City, a non-profit that focuses on getting people out of jail. Spickler questions why the ionizing system was installed in the Shelby County Jail.

The county spent more than $1 million installing the system after Spickler and others filed a lawsuit and raised questions about conditions in jail surrounding inmates and the spread of COVID-19.

"The ionizers are not the solution that the people in jail need. We filed this lawsuit to protect people in the jail and it's Shelby County's obligation and the sheriff's obligation to protect its people in buildings," said Spickler.

Spickler said instead of installing the ionizers, the sheriff should have focused on improving airflow and quality.

As for the money spent on the system, Sheriff Floyd Bonner said, "We're all trying to do the best we can do with this."

When asked if it was a good use of $1 million?

"Again not knowing the science behind COVID, you try and do what you can do to be safe as possible," said Bonner. "I feel like it was a great investment to not only keep the detainees safe, but the employees as well. "

"It sounds like multiple millions of dollars have been spent on this, so definitely taxpayers should be concerned about how this took place, where money went, and commission will be following up on it as well," said Wright.

A spokesperson for Shelby County Schools said the installation of the project is 85% complete and the money spent on this project did not come from the general fund or other local dollars. They said the money for this came from COVID relief funds. The statement also said in part the district researched and vetted air quality systems and this system met their requirements. The district made this video explaining the ventilation.

The spokesperson said during the research and vetting of indoor air quality solutions, their review identified NPBI as the type of technology that met their requirements to provide an effective, cost competitive, and safe type of solution for indoor air quality improvement, minimizing the spread of aerosol-based contaminants and disease.

A statement also said the district is committed to offering the best services and support for our students.

RELATED: Shelby County to continue COVID-19 vaccination outreach to all residents, including teens

According to the Global Plasma Solutions spokesperson:

The litigation is baseless and built on faulty assumptions and incorrectly conducted testing, which is why GPS quickly filed a motion to dismiss the suit that was filed by a professional plaintiff.  GPS stands by its products and claims.

GPS is proud to be a national leader in delivering innovative indoor air quality solutions. Our company was created in 2008 to bring the advantages of ionization without the harmful byproducts of older or less advanced technologies. Our low-power Needlepoint Bipolar Ionization technology, which is installed in more than 250,000 locations, is different and meets stringent ozone-free safety standards (EPA, CDC, ASHRAE).

GPS has conducted hundreds of hours of testing in trusted, third party labs to assess and validate its products. These tests shouldn’t be discounted simply because GPS commissioned them. We also work with a number of clients that, due to the nature of their facilities, are constantly monitoring the quality of their air and proving out the benefits of NPBI every single day.

We would love to see many more academic institutions and agencies involved in this research – and are actively pushing for clear national standards to guide this research and help minimize the confusion so many are seeing in the market.

Needlepoint Bipolar Ionization is not a silver bullet, nor has it ever been positioned as such. Rather, it is designed to work as part of a comprehensive, carefully designed and professionally-installed HVAC system that includes filtration.  Testing in third party labs has demonstrated effectiveness in reducing SARs-CoV-2 in large laboratory settings.

GPS is and has been deeply committed to science and transparency. As part of this commitment, we have invested more than $1 million in testing in just the past year. We work closely with some of the country’s most trusted independent research labs to review, refine, and validate the safety and effectiveness of our technology. We also have advanced testing centers in Charlotte, NC and Oak Ridge, TN.

GPS tests its effectiveness in fighting SARS-CoV-2 in a large, room-sized enclosure -- not the “shoebox” you may have heard about in an inaccurate news story. GPS engaged in initial SARS-CoV-2 testing in June 2020 at the height of the pandemic. That testing was appropriately done in a small Biohazard Level 3  enclosure due to strict COVID-19 safety protocols and requirements. Beginning in July 2020, subsequent testing has been conducted in a much larger, room-sized enclosure [20’x8’x8’] to better emulate real-world conditions. Efficacy results from the larger chamber were consistent with those from initial testing, and these lab results all demonstrate that GPS technology helps reduce certain viruses and bacteria.