"I’m calling their bluff on this. None of this is any different than inflatable Santa Claus and plastic," said Nicolas Toombs. 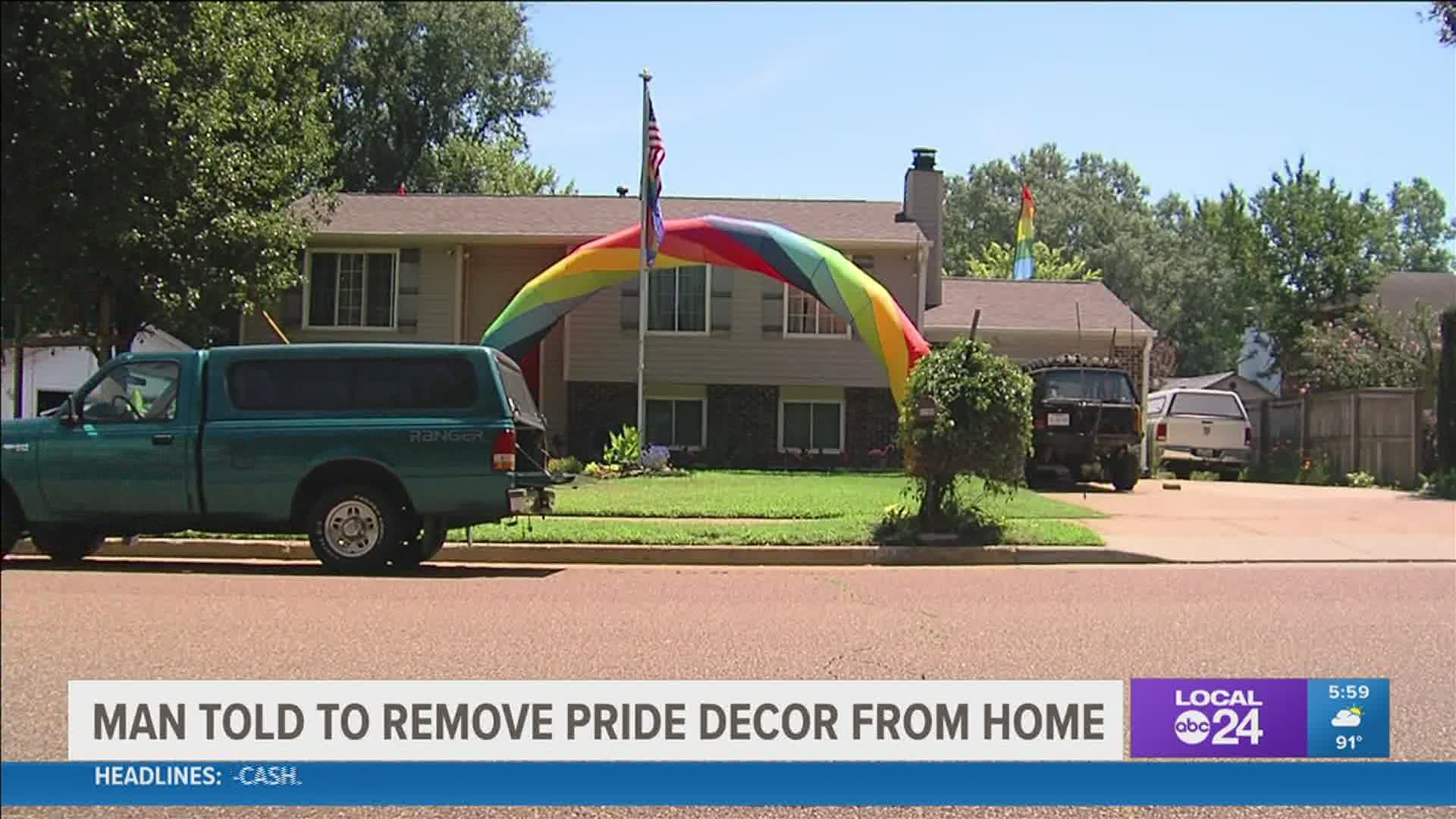 BARTLETT, Tenn. — A homeowner says the city of Bartlett is targeting him because of his sexual orientation. Nicolas Toombs said code enforcement wants him to take down the Pride Month decorations in front of his home.

So what's causing such a stir in Bartlett? A big inflatable rainbow and large flags.

"It’s Pride month. It’s decor," said Toombs. "I kinda look at this as First-Amendment freedom of expression, or art."

Toombs said he was surprised when code enforcement notified him, saying the pride month decorations needed to be taken down because they violated Bartlett Municipal Codes regarding sign regulations.

He said he is being unfairly targeted by code enforcement.

The homeowner says this inflatable isn't any different than a Xmas inflatable and says he is being targeted by code enforcement because of his sexual preference. pic.twitter.com/eZh5Ypl9VE

On the phone, Bartlett Mayor Keith McDonald said the inflatable and flags violate city code and this has nothing to do with Toomb's sexual orientation.

"We're just abiding by the law and that is for the purposes of defending the value of our neighborhoods," said McDonald.

"I’m calling their bluff on this. None of this is any different than an inflatable Santa Claus or a plastic Snowman, blow up turkeys at Thanksgiving, and all the other stuff people put their yards," said Toombs.

Quinn said while flags like this are considered "commercial" and not allowed in Bartlett, he thinks the inflatable issue may need to be looked at.

"What if neighbors start complaining about kids' big inflatable slides in the front, bouncy houses, stuff like that? So what if someone wants to keep it for the summer in their front yard. How do we address that?" said Quinn.

Quinn believes a neighbor dispute is at the center of this code complaint.

"I do feel like there is some animosity between the neighbors, and I would really like to get to the bottom of that to see what’s going on," said Quinn.

Toombs also believes it is a neighbor who called in the complaint, though when Local 24 News asked, the neighbor denied it.

"She uses the cops and code to bully and get her way," said Toombs.

Originally, Mayor McDonald told Local 24 News that inflatables weren't allowed in the Bartlett City Limits except during Christmas time. He later came back and said that wasn't the case and that the city lawyers were evaluating the inflatable issues. As for Toombs, he says Pride month lasts almost another 2 weeks, and he does not plan to take his decorations down.

Bartlett city manager first told me inflatables were not allowed in Bartlett but there was an exemption during the holiday season...But then couldn't point to the ordinance/code that said that. Now he says he is having the city attorney evaluate the inflatable issue. pic.twitter.com/LowjY1v9hn