More than a decade after its creation and taxpayers spending more than $170 million, not a single industrial tenant has moved in. 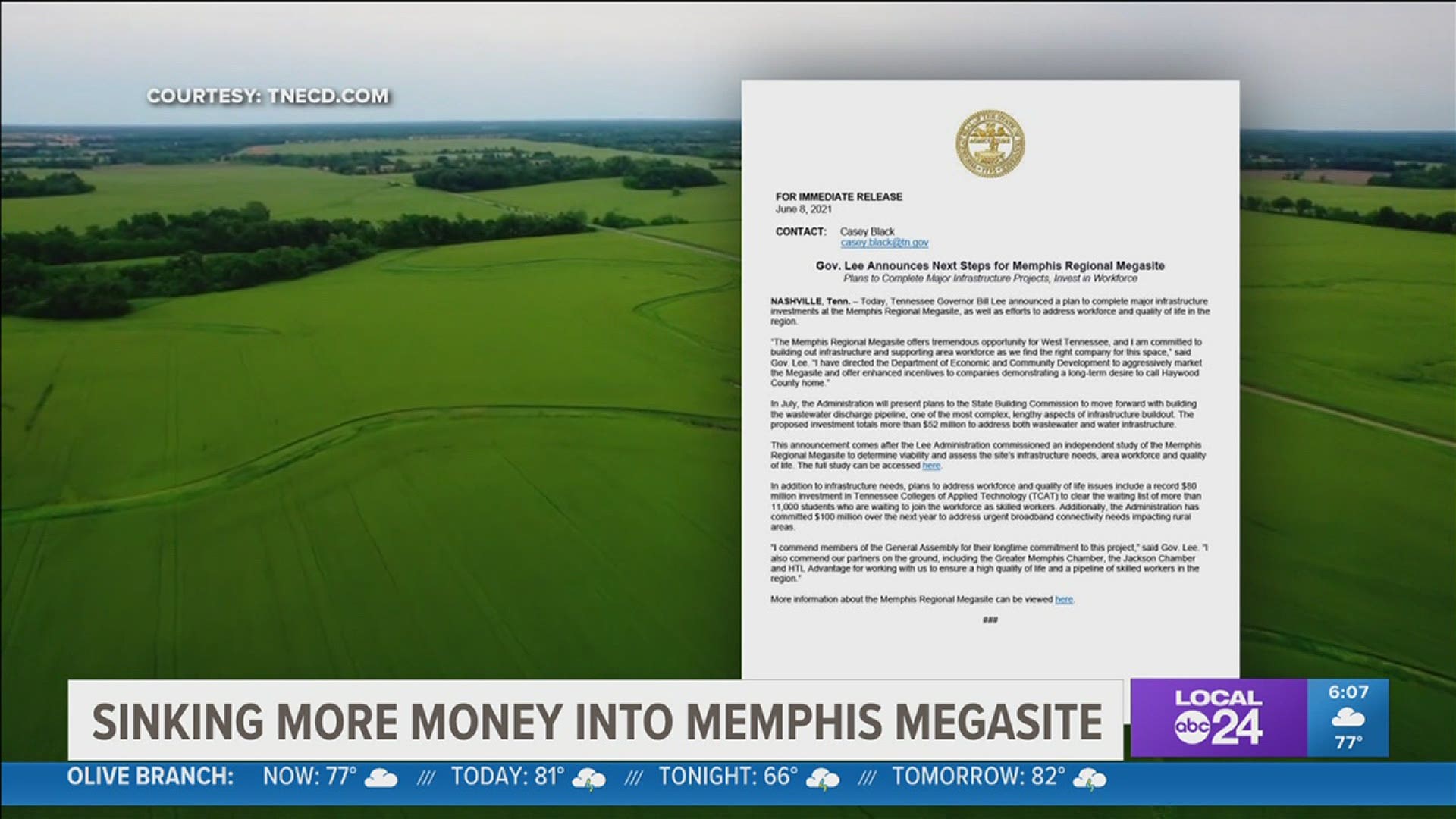 MEMPHIS, Tenn. — Critics of the Memphis Regional Megasite are calling this week's announcement to spend another $50 million of taxpayer dollars on the project a mega mistake.

The Megasite is located halfway between Memphis and Jackson, Tennessee.

More than a decade after its creation and taxpayers spending more than $170 million, not a single industrial tenant has moved in.

"We could see a whole slew of different pollutants that will have a different treatment requirement, and they are not identified right now. We don't know who is coming to that site," said Scott Banbury with the Tennessee Sierra Club.

Banbury is concerned how the Mississippi River or other Tennessee waterways could be impacted by the Memphis Mega site.

The state's promotional video outlines how the 4,000 acre site could look one day. But since its creation in 2009, no one has built here. One reason - a wastewater pipe connecting the site to the Mississippi River needs to be built.

This week Governor Bill Lee announced the state would spend the $52 million to build it out.

"This is another $52 million going to something we have no real clear return on investment," said Tori Venable with Americans for Prosperity.

Venable has been a critic of the project since its creation.

"The field of broken dreams right? They keep having this idea that if they build it, they will come, right? And they keep throwing money in this 4000-acre property and yet have no takers. And they keep saying if we have the infrastructure, it will be there. What have they done with the $200 million they have spent to date?" said Venable.

A recent study paid for by the state found in addition to the pipeline issue, the megasite has not landed a tenant - in part - because there are concerns that we don't have the workforce to support whatever is built. And while our cost of living in low, according to the study, so is our quality of life when compared to other cities we are competing with.

"The bottom line is the megasite and its development needs to be a priority for the governor. And this is going to be a game changer for Covington, Tipton County, and West Tennessee for years to come," said Covington Mayor Justin Hanson.

RELATED: Opinion | I take Governor Lee at his word on investing in the Memphis Regional Megasite | Otis Sanford

Hanson applauds this week's announcement, saying the infrastructure investment will make the site more attractive to potential tenants and it will be money well spent.

Hanson said Covington is one of the closet city's to the site and will benefit once a tenant is secured.

Hanson said while the state study found concerns with the workforce, a different study recently completed found there was adequate workforce to fill jobs created if a tenant is secured.

The Memphis Regional Megasite offers tremendous opportunity for West Tennessee, & we are committed to building out infrastructure & supporting area workforce as we find the right company for this location. https://t.co/6oVqr7WS4V