"(It) signals there is more than smoke here. There is actually fire here," said Jeb White, Taxpayers Against Fraud CEO. 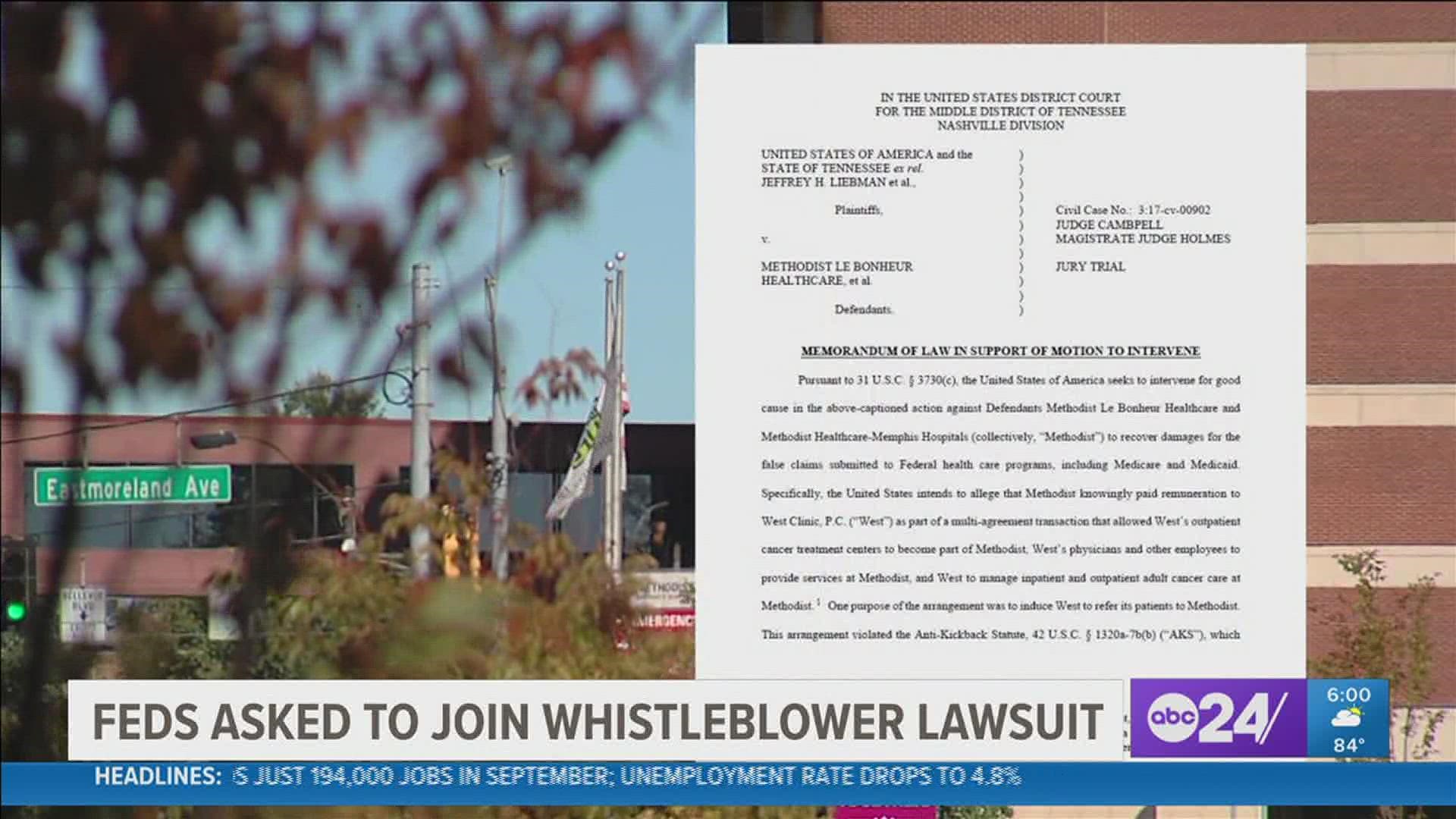 MEMPHIS, Tenn. — The federal government is asking to join a whistleblower lawsuit filed against Methodist Hospital.

Friday, the federal government filed a motion to intervene. According to the motion, the feds want to recover damages for claims that Methodist knowingly submitted or caused to be submitted to Federal health care programs, including Medicare and Medicaid, and knew were false.

The motion said the United States intends to allege Methodist knowingly paid remuneration to West Clinic, P.C. (“West”) as part of a multi-agreement transaction. That transaction allowed West’s outpatient cancer treatment centers to become part of Methodist, West’s physicians and other employees to provide services at Methodist, and West to manage inpatient and outpatient adult cancer care at Methodist.

Read the motion to intervene HERE and the memorandum of law HERE.

One purpose of the arrangement was to induce West to refer its patients to Methodist.

"The fact that the government made the decision to intervene or takeover this whistle blower case signals there is more than smoke here. There is actually fire here," said Jeb White, Taxpayers Against Fraud CEO. "It says a lot if they only intervene in about 20% of the whistleblower cases that are filed."

White has been following this case from the beginning.

"When you are going against a whistleblower and their lawyer, they have very limited resources. But the government has a lot more firepower behind them, so this is a big deal," said White. "Kickbacks are identified as the number one driver to bad decision making in the medical profession. So this idea of cancer doctors making decisions based on their own greed as opposed to patient need is a concern for everybody."

According to the original complaint filed by the two whistleblowers, the scheme caused damages to Medicare and Medicaid programs to the tune of more than $800 million. It was originally filed in 2017 but remained sealed until last December.

The lawsuits claim from 2012 to 2018, West Cancer Center and Methodist Healthcare knowingly defrauded federal and state healthcare programs. According to the lawsuit, Methodist paid West physicians kickbacks of more than $400 million. It claims the doctors were given kickbacks for referrals of cancer patients for hospital admissions, chemical infusions, radiation, and outpatient procedures.

"It's a question of bribes really," said White. "It is a question of: did a provider receive a kickback from a healthcare system that caused them to then prescribe or encourage people to go in a particular hospital? The harm happens whenever a physician makes a decision on his own bottom line versus the needs of the patient. "

Methodist took part in a program called the 340B program, which allowed the hospital to acquire drugs at deep discounts. The lawsuit claims the hospital would acquire the drugs at a discount and patients' insurance would be charged at a higher rate. Then West physicians and Methodist would split the difference.

Before the West "alliance" from 2008 to 2011, Methodist's average gross charges for outpatient services were $1.38 billion per year. After the "alliance," it jumped to $3.07 billion.

From 2012 to 2014, the number of cancer patients being admitted to Methodist more than doubled. Discharges for oncology patients went from 7,320 to 15,834.

During the years of the alliance, Medicare payments to Methodist for outpatient services increased by 300%.

The lawsuit says the partnership was richly rewarding to both parties. Methodist paid $400 million in cash directly to West physicians.

Methodist responded to our request for comment with the following statement:

“We are disappointed by the Department of Justice’s decision to seek to intervene in this qui tam lawsuit; nothing has changed about the case since DOJ’s initial decision not to intervene in September 2019. The lawsuit seeks to portray customary and legal business arrangements between MLH and West Clinic physicians as illegal activities. The allegations in the suit are without merit and we will vigorously defend against them.

The suit amounts to after-the-fact second guessing of the level of payments MLH made to West Clinic for the services provided by its physicians. This compensation structure was designed by respected outside experts who determined it reflected fair market value for such services, and our payments for those services were appropriate. MLH received every service due under the management services agreement.

As we said when the litigation began, we uphold the highest standards and comply with all legal and regulatory requirements and are proud of what our partnership with West Clinic accomplished. The affiliation, similar to arrangements between medical specialty groups and providers around the country, was successful and did exactly what it was intended to do: create an integrated cancer diagnosis, treatment and surgical service that improved cancer care and led to better patient outcomes for the Memphis community. Among other outcomes, the affiliation:

We set ambitious goals when we entered the partnership and met them. We will continue to enhance our cancer care services, as we pursue our mission to serve our patients and our community and provide them with the best health care possible.

“West made the decision some time ago to settle so it could focus on caring for its patients and not be distracted by this meritless suit. West is disappointed with the federal government’s attempt to intervene in this action, and stated intent to add West as a defendant. At the time West settled, the government told West that it had investigated these allegations and did not believe they warranted intervention. As a result, the federal government consented to West being dismissed. This filing today is wholly at odds with the government’s prior representations to West, and the information the government claims is “new” has been public for years. In reality, West’s partnership with Methodist increased access to cancer care and improved patient outcomes throughout the Mid-south, facts that the federal government has chosen to ignore. This misguided 11th hour attempt is based on a mistaken interpretation of complicated healthcare regulatory laws which is wholly unsupported by fact or law. West obviously disagrees with the government’s decision today and plans to vigorously oppose these unfounded allegations.”