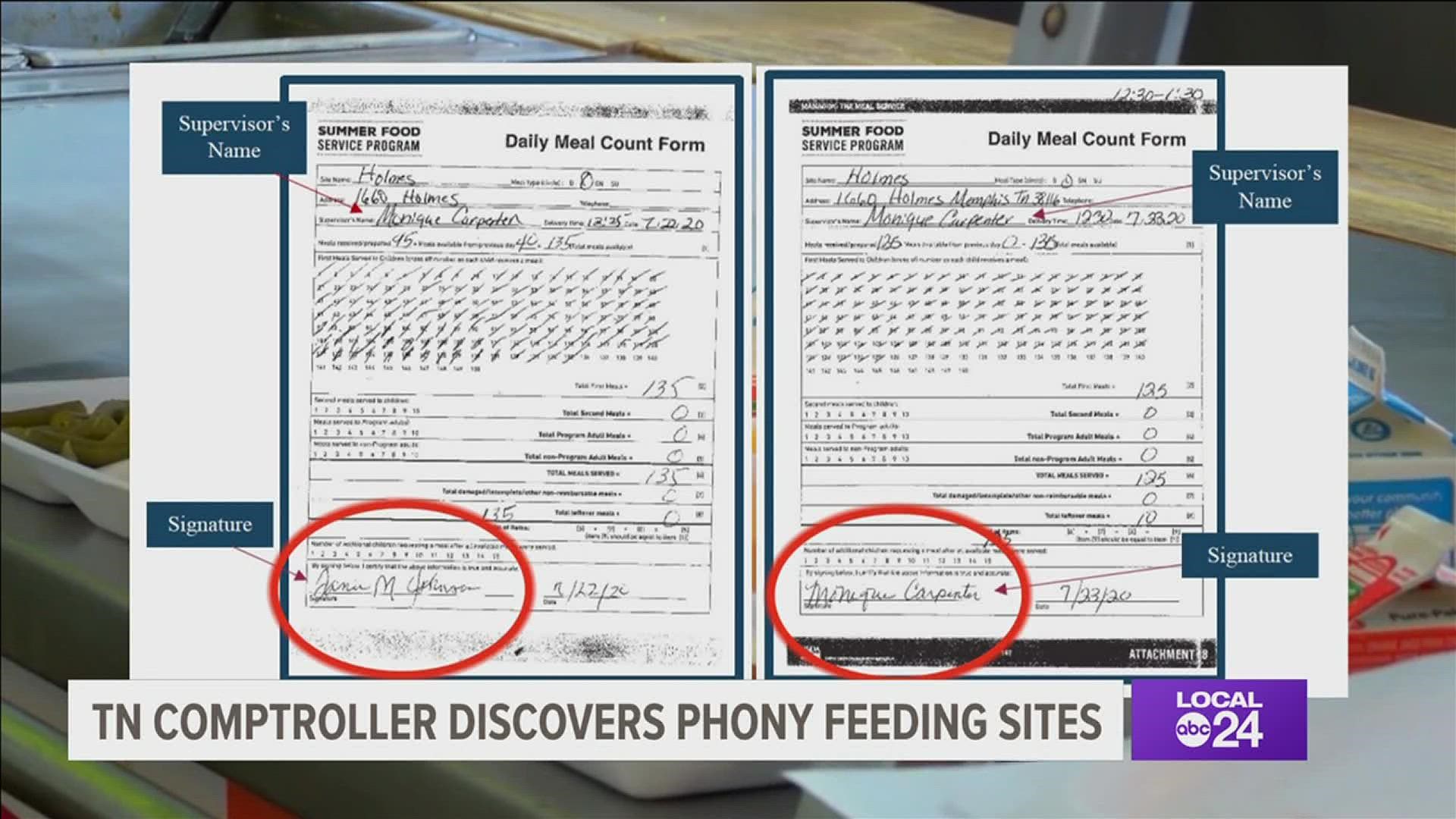 MEMPHIS, Tenn. — Two Mid-South charities have been accused of operating fake meal-giveaway sites. Taxpayer money was supposed to be used to feed disadvantaged children at 21 locations around Memphis last summer but a state audit found many of the meals were never served. They said the non-profits pocketed the cash instead.

According to state records, Gabriel Partee is the executive director of Alumni Music Incorporated, one of the non-profit groups that was contracted to feed children last summer.

"Unfortunately, when we visited Memphis last summer, fraud is what we found," said John Dunn, the Tennessee Comptroller's Office spokesperson.

The second group that was supposed to be feeding the children was called Open Door.

According to the audit, Open Door claimed to be feeding people at Chandler Park. Employees at the school adjacent to the park told auditors that no meals were handed out there all summer—the park was closed due to COVID-19.

Open Door also claimed to be serving meals at 1189 Finley, but auditors said that didn't happen when they were inspecting.

When we asked the person who answered the door, they said, "I am not going to answer that. I am going to let my boss answer that."

NEW: Not exactly a healthy meal for a child. A slice of bologna, one pineapple chunk, a package of crackers, ten cheeseballs, and 2-3 ounces of punch & milk. This is what our auditors observed at a feeding site in Memphis. Read more: https://t.co/59AdaiqDWb pic.twitter.com/eHu2YGkwVR

Auditors also questioned, the legal identity of who they were dealing with. For example, one staff member for Open Door apparently went by several different names, and signed documents with both names.

When auditors went to a feeding site, one site supervisor said her name was Janie Johnson, but the audit said staff called her Ms. Coleman. Auditors said a year prior, she identified herself as Monique Carpenter when they visited. She also signed documents using both names. The audit said it was unclear why she used different names, and the ambiguity raises questions as to the identity of individuals working for the program.

Auditors also questioned connections between the charities and the people managing and working for the operations.

"We also found there were people involved in these organizations, that have been involved as other sponsors, in previous years, that had been kicked out of the program. So they were not supposed to participate at all," said Dunn.

Auditors say four people who were deeply involved with two other agencies that were kicked out of the program in 2015 and 2016, were running feeding sites for Alumni Music. The individuals named were Eddie Partee, Tomeka Calvin (Partee), Sandra Riley, and Tashay Collins. Those individuals were connected to other sponsor programs called Youth Patrol and Youth Enrichment. Auditors said those groups were found to have deficiencies in 2015 and 2016 and terminated from the food program. Auditors found them working for Alumni Music when they did site visits, even though they were not supposed to participate because of the prior issues.

Another issue was Alumni Music's connection to Open Door. Auditors reviewed documents that questioned the two groups relationship. In addition, auditors found overlapping feeding sites, which meant both groups would have been serving food at the same locations, which is not allowed.

We tried to contact representatives for both Open Door and Alumni Music but no one would answer our calls or answer the door when we visited their business address.