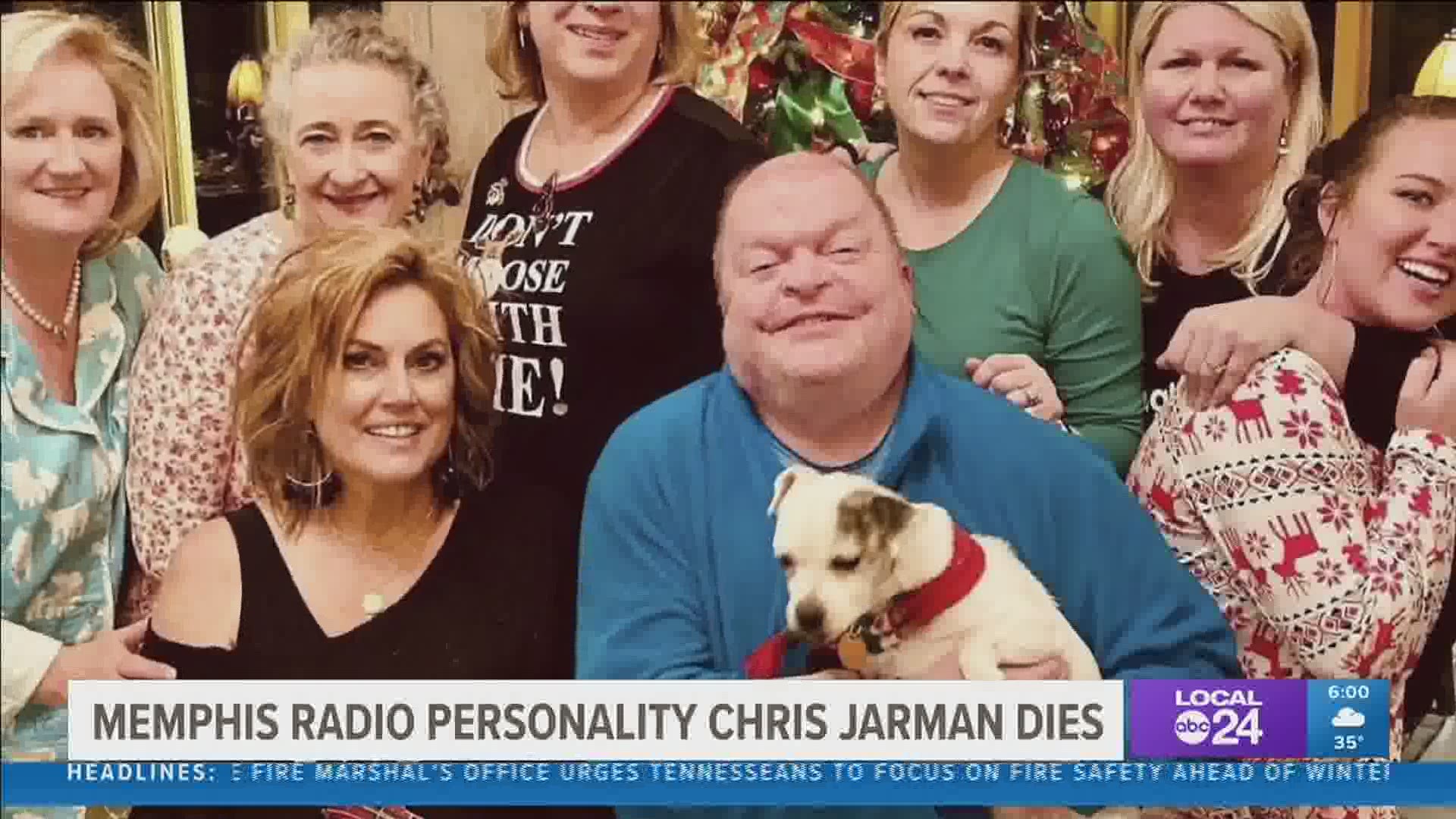 Wednesday morning, the station played an announcement recorded by his co-host Danni, who said, "Our dear friend Chris Jarman had a tragic accident and is no longer with us."

Fans questioned if Jarman would still be alive if an Intensive Care bed would have been available for him Tuesday morning when he needed it.

Jarman had to be taken to a hospital 100 miles west of Memphis because that was the only regular ICU bed available at the time.

It is with great sadness we share the tragic loss of our beloved Chris Jarman.

Thank you for all of the calls and messages expressing sympathy. Please continue to pray for his family. https://t.co/5iEkdWc6z3

One of his childhood friends not only had to call 911 for help Tuesday morning, she was by his side when he took his last breath.

Crittenden said losing Chris Jarman was one of the hardest days of her life. Crittenden and her sister Tammi Bell said Jarman was like their brother. They can't believe he is gone.

RELATED: Memphis radio has lost one of its own

"He will leave a huge hole, not just for me and Shanna, but our entire family," said Bell.

Crittenden said earlier this week, Jarman broke his ankle. He was staying at her house recovering. Tuesday morning, Crittenden said he passed a blood clot and had a heart attack. She called 911 and he was rushed to Baptist Crittenden, which is a small 11-bed hospital. The ladies said Jarman needed to be transferred to a regular intensive care unit, but no beds were available in Memphis.

"You're begging other hospitals. I can't tell you how frustrating that was. Heartbreaking, heart wrenching. Not just for us, but you could see it across the doctor's faces. They tried, call after call. It was panic mode," said Bell.

The closest ICU bed available was in Batesville, Arkansas - 100 miles away. Jarman was transported by ambulance to the White River Medical Center because Crittenden said no helicopter was available.

"We literally said prayers during the whole transportation of it," said Crittenden.

Crittenden said Jarman made it to Batesville, but died several hours later. They don't know if the outcome would have been any different if he had moved to a bed in Memphis. She said Jarman was considered "brain dead" at that point. Crittenden was in the hospital room when he passed away.

"It's a terrible sad and tragic loss - sudden, but we just want him to be celebrated across the Mid-South," said Bell.

The long time friends said Jarman was one of a kind. He had lots of friends and fans. His love for the radio began while attending West Memphis High School, where he was the student council president

"He loved the microphone. He loved the mic. Back then he would say 'Good morning West Memphis High School. This is your famed president', and that was so him," said Crittenden, "He was a larger than life personality, no doubt about it."

Bell said Jarman was a friend to all. Fans who listened to his radio show loved him, his friends loved him. He appreciated people from all walks of life and got along with everyone.

"He loved his people. And he had a heart as big as he had a life, and he brought so much joy," said Bell. "He was just a passionate soul and we are so grateful we got to be a part of his life. "

Funeral arrangements are still being worked out.

Jarman was a graduate of West Memphis High School in 1989 and was a part of the well-known "Drake and Zeke" show before coming to Memphis.

During his many years on Memphis radio, Jarman, who was also known as The Jar, was very involved in fundraising for the Ronald McDonald House.

Bell said anyone who feels the need to do something, should consider making a donation in Jarman's name.

RELATED: Memphis radio has lost one of its own