Resident opposition to a parking garage for St. Jude Children's Research Hospital may be the first concern, but it's likely not the last. 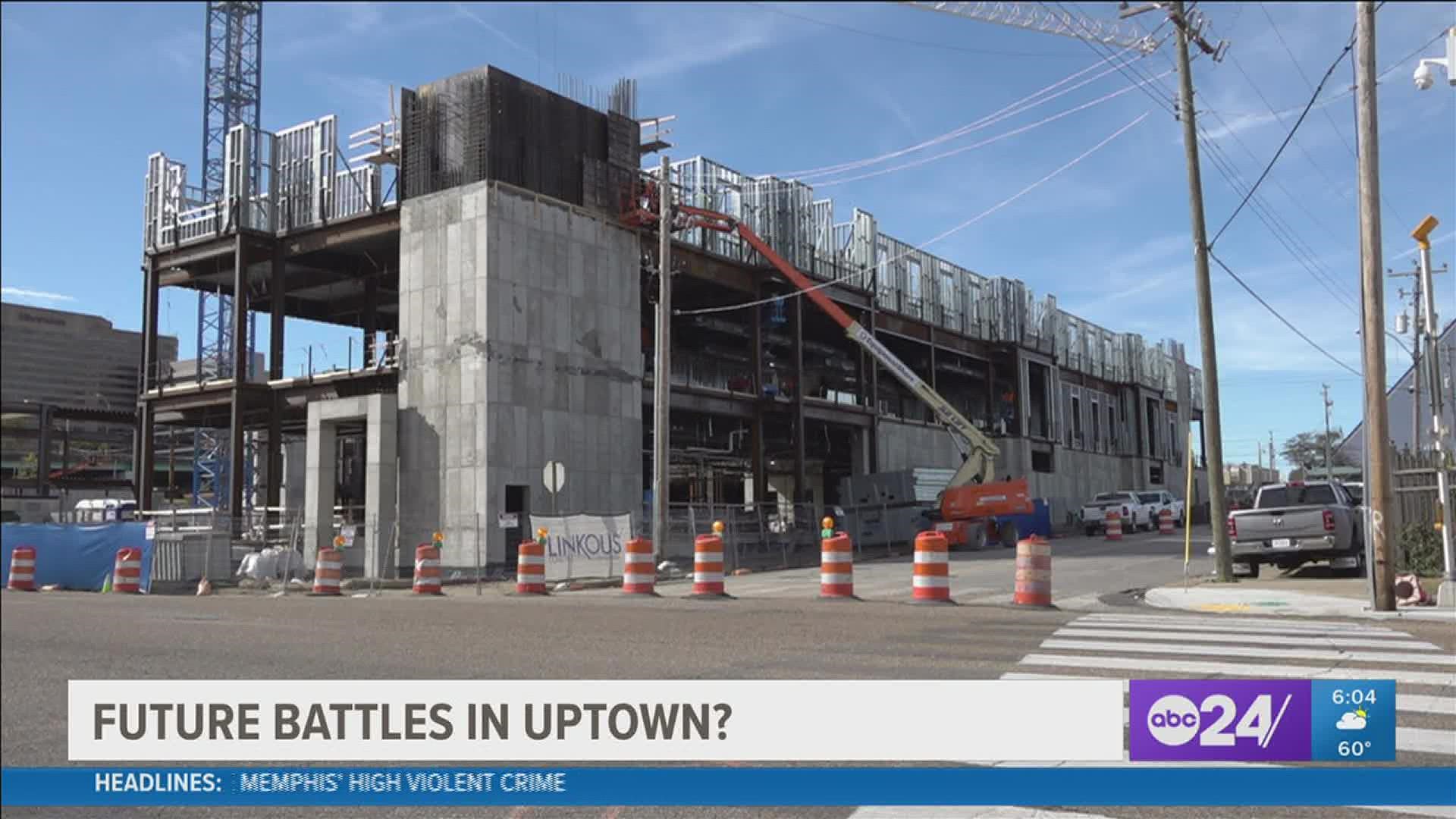 MEMPHIS, Tenn — Controversy over a proposed parking garage at the edge of downtown Memphis' Pinch District may be the first of future redevelopment battles in the neighborhood.

St. Jude Children's Research Hospital has proposed building a nearly 80-foot tall parking garage at the corner of A.W. Willis and Third Street. Residents that live in the adjoining Uptown/Greenlaw community have concerns about its location and size.

"We see the harm in bringing more cars into the community - that is going to bring in more traffic, so the quietness of the neighborhood changes," said Valerie Peavy, an Uptown business owner.

The parking lot debate may be first, but those following redevelopment of the Pinch District concede it probably won't be the last.

More than five years ago, city leaders created a master plan for the Pinch District.  A private developer plans to build hotels, retail and office space, and apartments. The price tag is estimated to be more than a billion dollars when complete.

St. Jude Children's Hospital has also started a massive expansion in the Pinch District. In March 2021, the St. Jude Board Of Governors approved a six-year plan to accelerate research and treatment for children with catastrophic diseases. The plan called for more than a billion dollars in construction and capital improvements, including a new patient living facility, which is currently under construction.

The St. Jude expansion and redevelopment of the Pinch is something Peavy supports, but she is concerned about how the growth will change the adjoining neighborhoods.

"It needs to change where it benefits all, not just one, " said Peavy.

The Pinch District has been in limbo for years. When the Pyramid was a sports arena, the area was vibrant. When it shut down almost two decades ago, many businesses closed up shop.

A moratorium on building permits in the district halted possible growth while the city put together a master plan for the area. That plan is now complete, and projects are starting to move.

"The need for a parking garage means more jobs are being created, more people coming to the Pinch, and that's a great opportunity for small business owners in that area," said Paul Young, Downtown Memphis Commission Executive Director.

Young concedes, like the parking garage controversy,  it is possible, there could be some opposition to future projects.

"This is some of the pain of progress, but I think our community is sophisticated enough to work through this," said Young.

Longtime business owner of Westy's Restaurant Jake Schorr has been waiting for years for redevelopment to happen.

"Progress needs to be made, and it must be made," said Schorr.

Hayes McPherson, the owner of Comeback Coffee, said when he opened the store in 2019, one of his considerations was the redevelopment plans, and he is looking forward to the future.

"It's not just talk anymore. We are starting to see some activity, which is cool because for so long it was just talk," said McPherson.

St. Jude media relations have not responded to a request to comment on this story.

🎄🌟 There's no time like the Holidays! Share a photo of your child's holiday spirit for their chance to light the official Downtown Memphis Christmas Tree! Your child must be between 4-10 years old and available Nov 27 from 4:30-5:30pm. Use #LightUpDownTown901 on submissions! pic.twitter.com/1z1H92Cj0R

ALSAC, the fundraising and awareness organization for St. Jude Children’s Research Hospital gave ABC24 this statement on the project:

St. Jude has invested in and called downtown Memphis home for 60 years, with an annual estimated economic impact to Greater Memphis of nearly $4 billion. We are proud to be part of this community and our city, and will continue to enrich it by bringing new opportunities for investment and employment to our fellow neighbors, while preserving the rich history of our area. We are listening to our neighbors’ concerns and are modifying our design to better blend into the community by changing the proposed color, having first-floor activation with retail, and creating additional green spaces to promote a more vibrant, walkable area.

St. Jude Children’s Research Hospital and ALSAC, the fundraising and awareness organization for St. Jude, have grown by more than 1,200 jobs over the past six years, and will add nearly 1,000 more jobs over the next six years to continue our mission to advance research and lifesaving treatment for children worldwide. This growth in Memphis has fueled the need for additional parking, and we have identified an optimal site that will create a safer environment for the community by routing Gayoso Bayou underground.

We will continue to partner with our neighbors as always and plan for a development that drives growth, fuels construction and service jobs, and encourages further investment in the community and our city.