Would that pipe protection plan offered in Memphis pay out in deep freeze?

Memphis residents get letters several times a year offering pipe/sewer protection. But is it worth it? 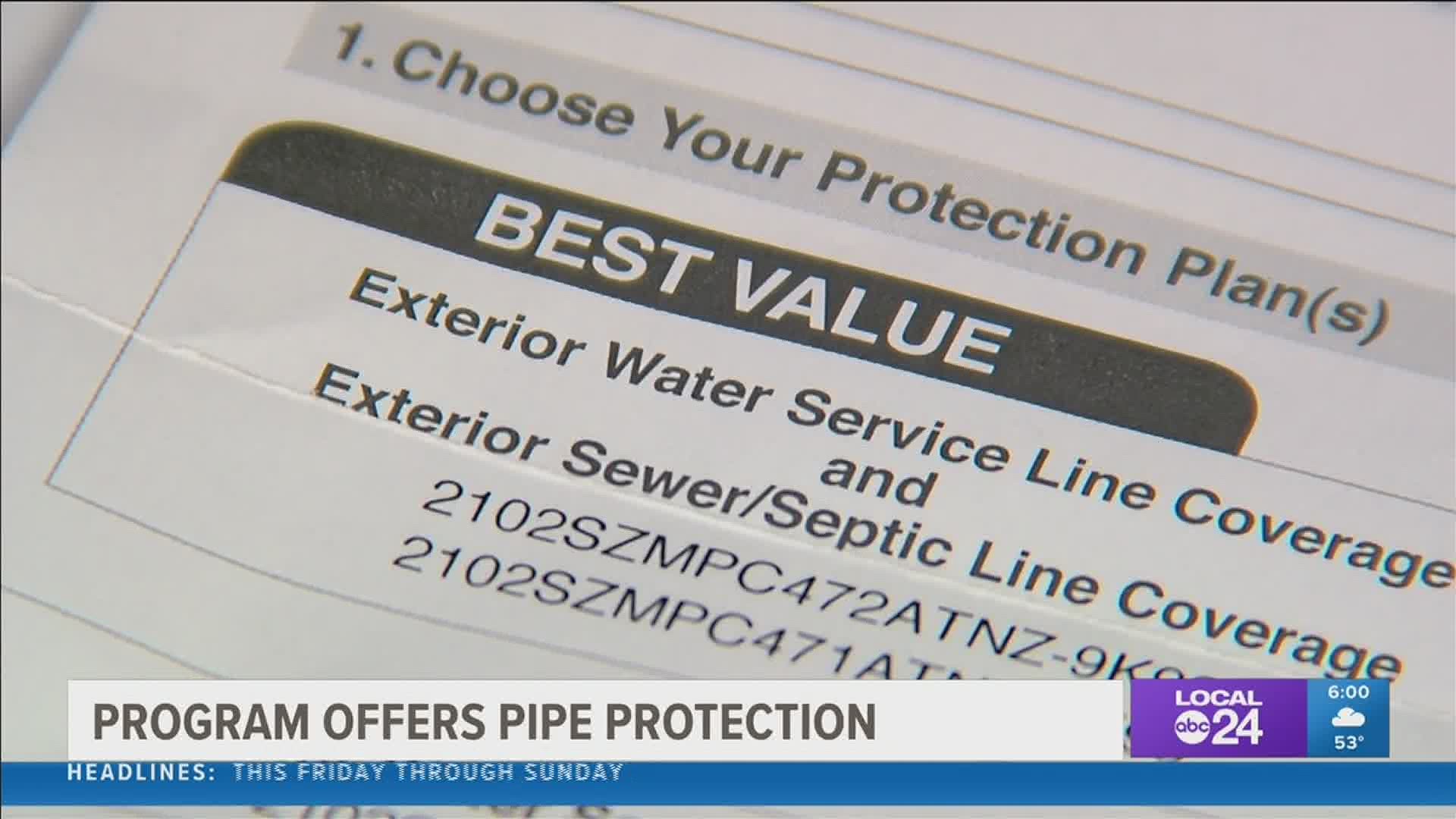 MEMPHIS, Tenn. — After the frozen and burst pipes we have seen and heard of the past week, if you live in Memphis, you may be thinking about the letters you receive several times a year offering you pipe protection.

The City has a partnership with a company called HomeServe offering sewer and water pipe protection for your home.

Is it legit? Would it have covered damage from this most recent event?

"We have been getting these for at least 3 or 4 years," said Jack Conway, Memphis resident.

Several times a year Jack Conway receives the letters at his East Memphis home. It's from HomeServe. It has a city of Memphis seal on it and offers him water and sewer line protection at a fairly reasonable rate. As a homeowner, Conway is responsible for water and sewer breaks and leaks on his property, which may not be covered by his homeowner's insurance.

"If you have an older home and your sewer lines are older and water is older, there is a higher propensity for failure to happen," said Robert Knecht, Memphis Public Works Director.

Knecht said while the city has a partnership with HomeServe, they don't endorse the company - and buying the protection is voluntarily. That relationship is why several of the letters are mailed every year to Memphis residents.

Since the partnership began in 2017, a HomeServe spokesperson said more than 7,200 Memphians have signed up. He added, last year the company performed 1,300 repair jobs for its Memphis customers, totaling just over $800,000 of work.

TAKE A GUESS: What is the lifespan of a #HotWaterHeater? 🔥

The big question for many, "If I had coverage, would it have covered breaks or leaks from the recent weather?

RELATED: MLGW rate hike to rebuild its infrastructure is in the works for the repairs from extreme weather

"We won't come out and thaw the pipe for you, but if the pipe breaks because of the natural thawing process - than that would be covered under the plan," said Myles Meehan, HomeServe Spokesperson.

"Get an agreement, read the agreement, and understand if there are any exclusions. Might even be a good idea to talk to a local plumber," said Randy Hutchinson, BBB spokesperson.

Randy Hutchinson with the Better Business Bureau said before signing up for anything, do your homework. HomeServe has an A plus rating with the BBB, but does have more than 400 nationwide complaints over a three year period -though Hutchinson said given the size of the company, that is not an excessive amount.

"The city does benefit. We do get revenue from this by virtue of them using the city logo - but again it's voluntary. In no shape or form are we saying a citizen has to do it," said Knecht.

According to the Knecht, the city makes several hundred-thousand dollars a year as a result of the relationship with HomeServe. They get a cut of policies sold and Local 24 was told the money goes to a fund to help the elderly and poor who can't afford to make these types of repairs.

That said, Conway isn't buying the protection. He isn't convinced he needs it.

"It could happen yeah, but how often does it happen," said Conway.