NAACP questions how many people of color Rasco let out of jail compared to others. 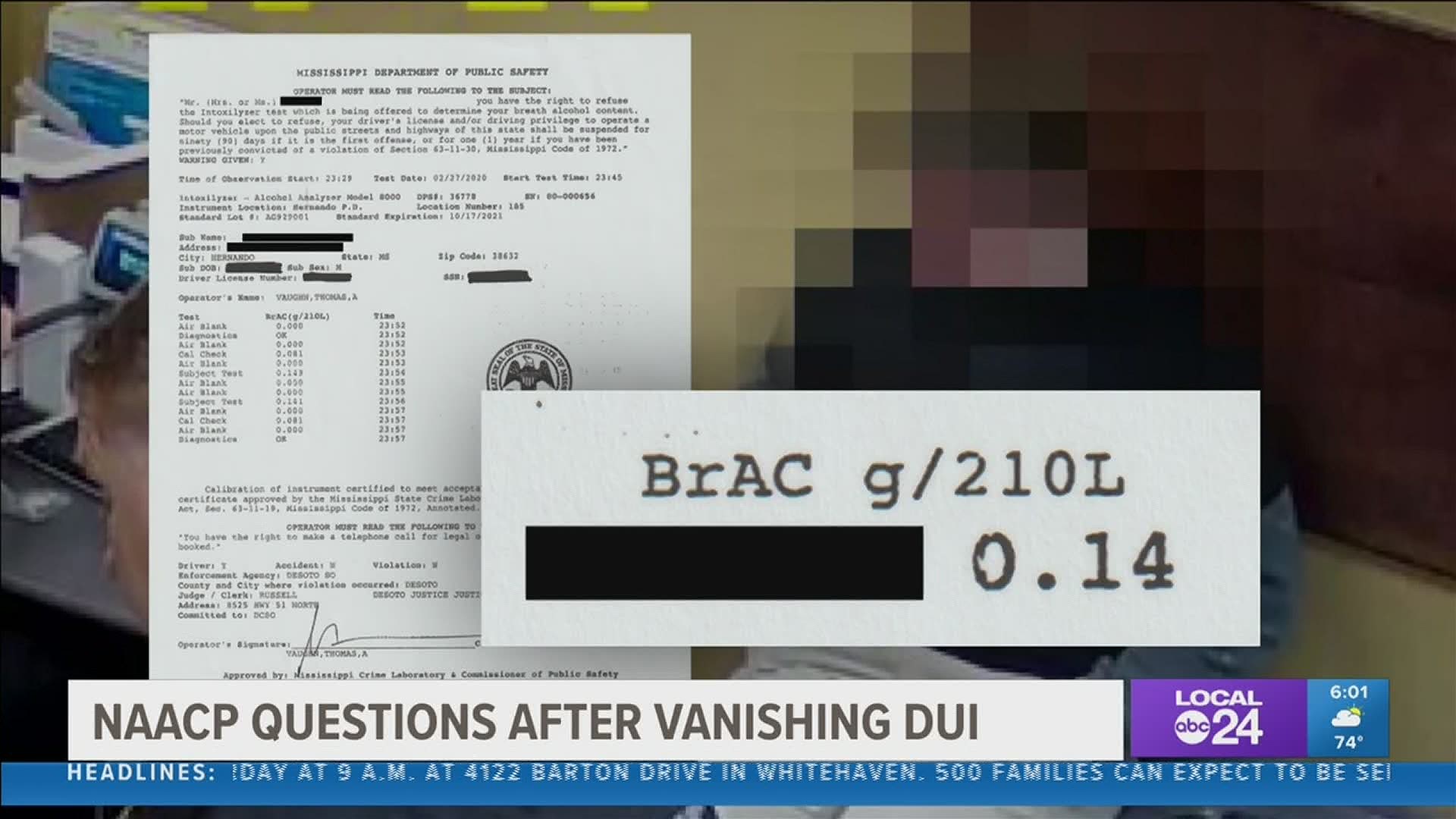 MEMPHIS, Tenn. — The NAACP has a lot of questions regarding DeSoto County Sheriff Bill Rasco helping an 18-year-old avoid being charged with drunk driving. Rasco admitted to Local 24 News he helped the man saying he has done it before and he would do it again. The 18-year-old is white and the son of a longtime sheriff department employee, and some question if that is why this 18-year-old avoided a courtroom.

"How does he pick the people he does this for,?" said James Mathis, DeSoto County NAACP board member.

Mathis is talking about what happened to this 18-year-old.

According to police records, in February of 2020 Desoto County Sheriff Department found the

The 18-year-old passed out behind the wheel at the corner of Byhalia Road and Foxwood Circle. A deputy reported they suspected he was drunk, so he was taken into custody.

Video shows the male blowing into an intoxilzyer. According to the intoxilyzer report, he registers .14 almost twice the legal limit.

You can see the 18-year-old leave in handcuffs, but the DeSoto County Sheriff Department can't produce mug shot or arrest ticket or any other documentation proving this man was ever booked into the jail or charged with drunk driving. In response to a records request, we were told, it doesn't exist. Even though the police report says he was taken to the jail and processed.

And despite an intoxiliyzer report showing a ticket number was issued and the case was assigned to a judge, the DeSoto County Justice Court clerk says there is no record of the arrest at the courthouse.

Usually once someone is charged with DUI, the paperwork is sent to DeSoto County Justice Court. In this case, the clerk says it never arrived.

Sheriff Bill Rasco admits he intervened in this case.

"I just helped the young man get out of jail and not be prosecuted, I did," said Sheriff Bill Rasco.

Reporter Jeni Diprizio asked Rasco, "Would anybody else been given the same treatment?

Rasco replied, "Yes ma'am. I've given a lot of people treatment like this. "

"I don't want it to where he can pick and choose who he does this for. He either does it for all people or none at all." said Mathis.

Mathis is concerned people of color are not getting the same treatment from Rasco. Saying it's not fair the sheriff is intervening in situations, like this one. But not all adding it's another example where people of color may not be treated equally by law enforcement.

During an interview Rasco told Local 24 he regularly helps many people in the jail get drug and alcohol treatment.

"I try to help people who have a problem. I know what drugs do to a family," said Rasco.

If that's the case, Mathis says he like the sheriff to start keeping records so, he can prove he is helping all types of people equally.

Local 24 emailed the DeSoto County Sheriff Department today, asking if they had any information regarding how people of color have received the Rasco treatment. So far, I've heard nothing.