The Leftwich Tennis Center in Audubon Park is not just for Tigers' men's and women's tennis teams - but Memphis residents as well. 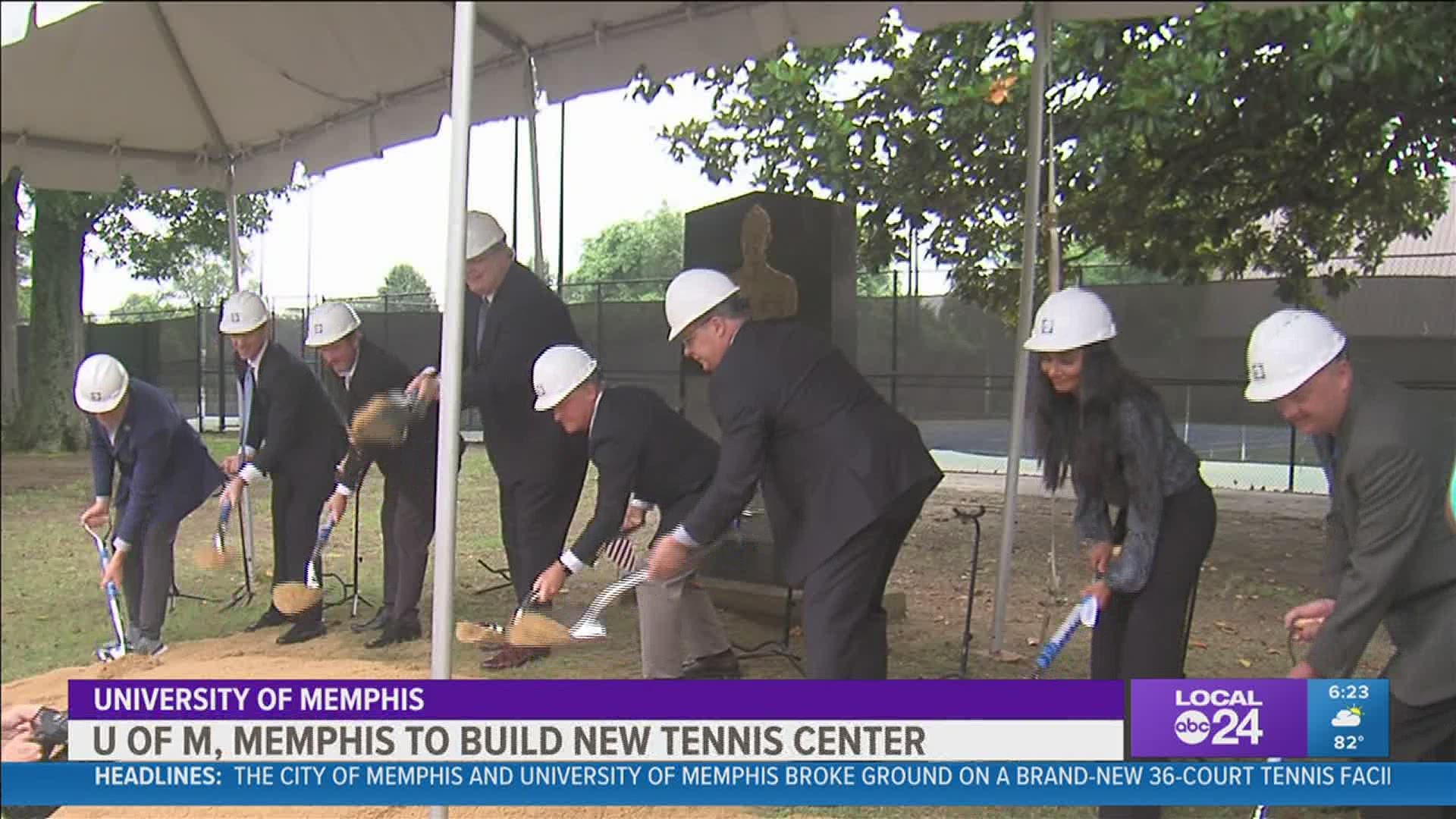 MEMPHIS, Tenn. — The city of Memphis and the University of Memphis came together Thursday to break ground on a brand-new tennis facility.

The Leftwich Tennis Center in Audubon Park will provide 24 outdoor and 12 indoor courts. And it's not just for Tigers' men's and women's tennis teams - but Memphis residents as well.

The $24 million facility is also expected to bring in national and NCAA tennis tournaments and conference championships.

"It means a significant amount for the city as well as the university. Really a great, critical step forward for tennis as a whole for the city, particularly for our programs, really positions our programs to compete nationally both in men's and women's tennis, and could bring national tournaments here,” said University of Memphis President Dr. M. David Rudd.

The majority of the tennis center's funding is coming from private and corporate donors, but the city and university added about $9 million combined.

Once the center opens in about a year and a half, it will replace the current Leftwich Tennis Center on campus.

Read the full release from Memphis Tigers Athletics below.

Shovels hit the dirt Thursday morning in Audubon Park in Memphis, as ground was broken on the new Leftwich Tennis Center. The $24 million facility, which will be the future home of the Tigers’ men’s and women’s tennis teams, is scheduled to be completed in approximately 18 months.

The new Leftwich Tennis Center will be able to attract major national tennis tournaments and NCAA and conference championships and their fans and will be the largest tennis facility within hundreds of miles, featuring 24 outdoor and 12 indoor courts. The project is a partnership between the City of Memphis and the University of Memphis, and the new Leftwich Tennis Center is designed by Memphis-based Fleming Architects and will be built by Memphis’ Grinder Taber Grinder.

“Collectively, with the UofM and our private donor group, we have spent countless hours over the last two years to get to this point,” City of Memphis Mayor Jim Strickland said. “This new facility will not only provide a home for Memphis Tiger Tennis, but it will be a state-of-the-art asset for all citizens to utilize year-round. I can’t thank our partners enough, and I’m so excited to get this much-needed project underway.”

“I want to thank the City of Memphis, the City Council and the many individual donors who are involved,” said UofM President M. David Rudd. “The Leftwich Tennis Center will be one of the finest facilities in the country, and it will benefit not only the Memphis Tiger Tennis teams but also the City as a whole. It will allow the University to host conference tournaments and national tournaments, and it will solidify our tennis teams’ reputations on the national scene.”

“We are tremendously excited to break ground on the Leftwich Tennis Center, and we are thankful to the City and the many donors who made this project a reality,” Memphis Vice President and Director of Intercollegiate Athletics Laird Veatch said. “When Memphis does something it does it right, and this beautiful facility is the perfect example of that. We can’t wait to have our tennis teams move in, and we’re excited about the possibility of bringing national tournaments to Memphis.”

“The Leftwich Tennis Center will be one of the premier venues in the country and is an example of an amazing collaboration between all of these partners to bring this project to life,” Todd Carlson, National Manager, Infrastructure Services, United States Tennis Association said. “The USTA, USTA Southern and USTA Tennessee provided technical and business solutions assistance for this project, and the USTA is excited to see the generational impact the facility will have on the health and wellness of the Memphis community.”

Located on Southern Ave. just east of the University of Memphis campus, the new Leftwich will remain a public tennis center open for the use of all citizens for leisure and competitive tennis play, teaching and clinics. It will replace the current Leftwich Tennis Center on the site.

A majority of the funding for the project is coming from private donors and corporate prospects, with the City contributing $3 million of capital funds and $1 million of in-kind public works improvements and the University adding $5 million. The citizens of Memphis will be enjoying and gaining the benefit of the $24 million facility with a direct investment of $4 million.

The center is maintaining the name Leftwich Tennis Center in honor of Lt. Col. William G. Leftwich, who died in service during the Vietnam War.

For more information on the project, visit https://newleftwich.memphistn.gov/.