Ole Miss students and faculty who pushed the university for years to move the statue have criticized administrators' draft plan for the new site. 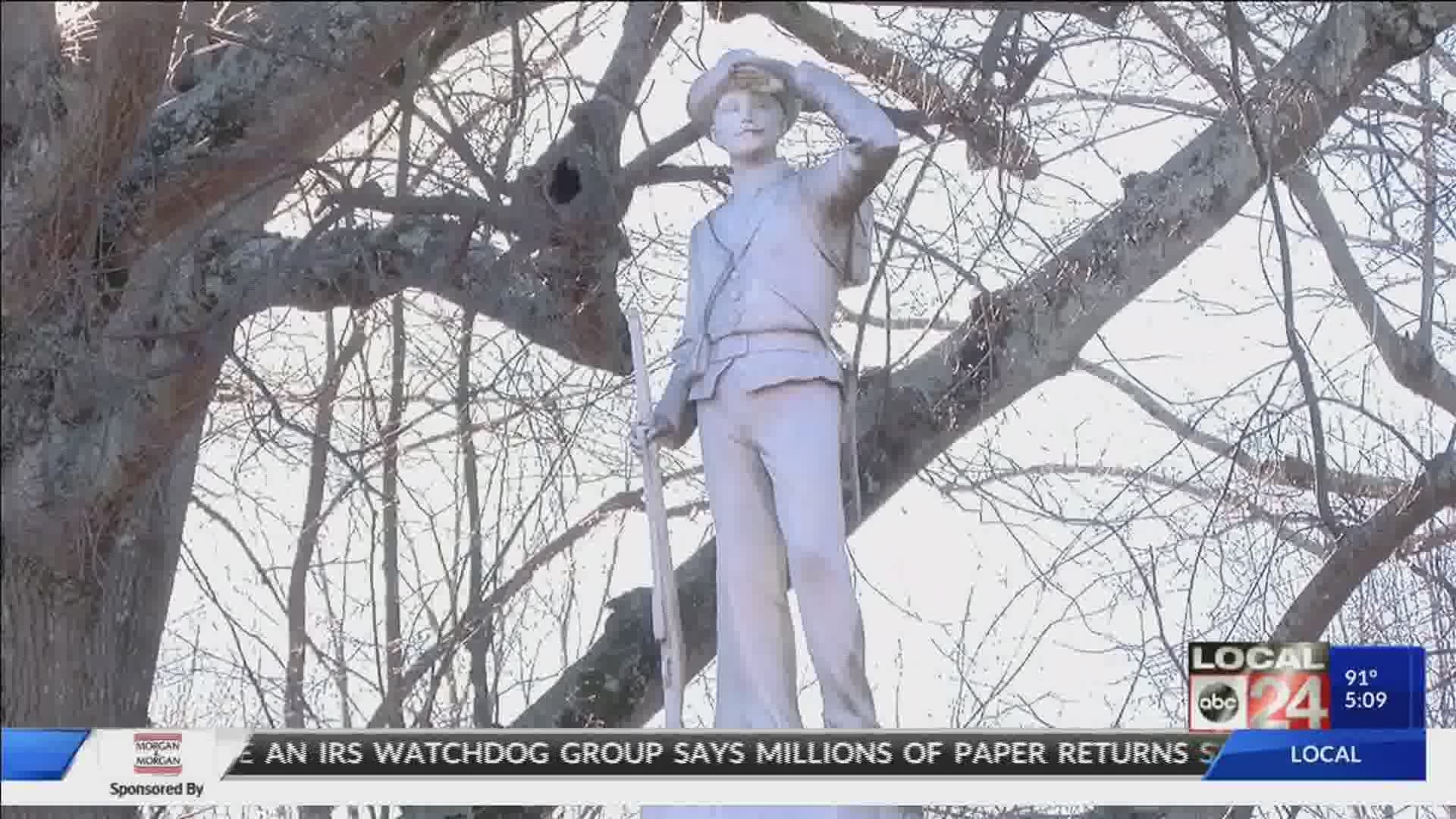 OXFORD, Miss — A Confederate monument that's long been a divisive symbol at the University of Mississippi was removed Tuesday from a prominent spot on the Oxford campus, just two weeks after Mississippi surrendered the last state flag in the U.S. with the Confederate battle emblem.

The marble statue of a saluting Confederate soldier was taken to a Civil War cemetery in a secluded area of campus. Students and faculty have pushed the university for years to move the statue, but they have said in recent weeks that their work was being undermined by administrators' plan to beautify the cemetery — a plan that critics said could create a Confederate shrine.

A draft plan by the university indicated that the burial ground will have a lighted pathway to the statue. It also said headstones might be added to Confederate soldiers' graves that have been unmarked for decades. Ole Miss Chancellor Glenn Boyce said Tuesday that the plan for headstones was being abandoned.

Boyce said a recent survey with ground-penetrating radar showed that bodies are buried close to the surface.

"I feel excavating within the walls of the cemetery presents a significant risk of disturbing remains," Boyce said in a statement. "This is a risk I am not prepared nor willing to take."

The University of Mississippi was founded in 1848, and the statue of the soldier was put up in 1906 — one of many Confederate monuments erected across the South more than a century ago.

Critics say the statue's location near the university's main administrative building has sent a signal that Ole Miss glorifies the Confederacy and glosses over the South's history of slavery.

The state College Board on June 18 approved a plan to move the monument. The decision happened amid widespread debate over Confederate symbols as people across the U.S. and in other countries loudly marched through the streets to protest racism and police violence against African Americans.

The statue at Ole Miss was a gathering point in 1962 for people who rioted to oppose court-ordered integration of the university.

In February 2019, a rally by outside pro-Confederate groups at the monument prompted Ole Miss basketball players to kneel in protest during the national anthem at a game later that day. Student government leaders voted two weeks later for a resolution asking administrators to move the monument to the cemetery, where Confederate soldiers killed at the Battle of Shiloh are buried.

One of the student senators sponsoring that resolution was Arielle Hudson of Tunica, Mississippi, who graduated this year and has been selected as a Rhodes scholar. She said Thursday that her joy at knowing the statue was moved was tempered by concerns about the university's elaborate cemetery plan. Hudson said she was pleased to hear that Boyce abandoned the headstone plan but she wishes he had done it without having to be pressured by hundreds of students, faculty members and alumni.

As a student, Hudson gave tours to prospective students through an "ambassador" program. She said ambassadors were generally told to avoid the Confederate statue, but she once ended up near it.

"Those conversations were hard, especially as a Black student trying to convince other Black students and their families that they belong here," Hudson said Thursday. "You're standing a few feet away from an object that tells them that space wasn't made for them."

The University of Mississippi has worked for more than 20 years to distance itself from Confederate imagery, often amid resistance from tradition-bound donors and alumni. The nickname for athletic teams remains the Rebels, but the university retired its Colonel Reb mascot in 2003 amid criticism that the bearded old man looked like a plantation owner. In 1997, administrators banned sticks in the football stadium, which largely stopped people from waving Confederate battle flags. The marching band no longer plays "Dixie."

Because of a student-led effort, the university in 2015 stopped flying the Confederate-themed Mississippi flag. A groundswell of support from business, religious, education and sports leaders recently pushed legislators to retire the flag.

Since 2016, the university has installed plaques to provide historical context about the Confederate monument and about slaves who built some campus buildings before the Civil War. A plaque installed at the base of the Confederate statue said such monuments were built across the South decades after the Civil War, at a time when aging Confederate veterans were dying.

"These monuments were often used to promote an ideology known as the 'Lost Cause,' which claimed that the Confederacy had been established to defend states' rights and that slavery was not the principal cause of the Civil War," the plaque says. "Although the monument was created to honor the sacrifice of Confederate soldiers, it must also remind us that the defeat of the Confederacy actually meant freedom for millions of people."

"Today marks an important moment for our university as the confederate monument has been moved from the Circle at the center of campus to the cemetery near Tad Smith Coliseum. I want to thank and commend the students, faculty, staff and administration, as well as alumni and university foundation boards, who provided valuable input and support for the relocation effort. Your commitment to bring about what’s best for our university made all the difference.

In addition, I’d like to thank the Mississippi Department of Archives and History and the Board of Trustees of the Institutions of Higher Learning for giving us the necessary support to move the monument to a more suitable location.

Since my June 22 update to the university community, we have revisited aspects of the project and I would like to provide an important update. Last month, we requested a ground penetrating radar survey inside the cemetery walls to determine the depth of cover material over the buried remains. The results of this survey were received in two parts on June 26 and June 29. The survey concluded that in some places minimal ground cover could create a high probability of disturbing the graves. Consequently, and after many conversations and serious consideration, I feel excavating within the walls of the cemetery presents a significant risk of disturbing remains. This is a risk I am not prepared nor willing to take.

This has been an important issue for our university, and today’s relocation is a meaningful change for our community. I’m inspired by our ongoing commitment to strengthen our campus as a positive, productive and welcoming educational environment for all.

Update from Chancellor Boyce on Monument Relocation - Office of the Chancellor
Today marks an important moment for our university as the confederate monument has been moved from the Circle at the center of campus to the cemetery near Tad Smith Coliseum. I want to thank and commend the students, faculty, staff and administration, as well as alumni and university foundation boards, who provided valuable input and support for the relocation effort.

RELATED: Lafayette County board votes 'no' to moving Confederate monument in Oxford

RELATED: Mississippi Board of Trustees vote to relocate Confederate monument at Ole Miss to another area of campus