"We hope for a miracle" | Silver Alert issued for missing man with Alzheimer's in Jefferson Co.

Jefferson County Sheriff Jeff Coffey said Joe Hall and his family were camping in the area for the holiday weekend. The trip quickly turned into a nightmare. 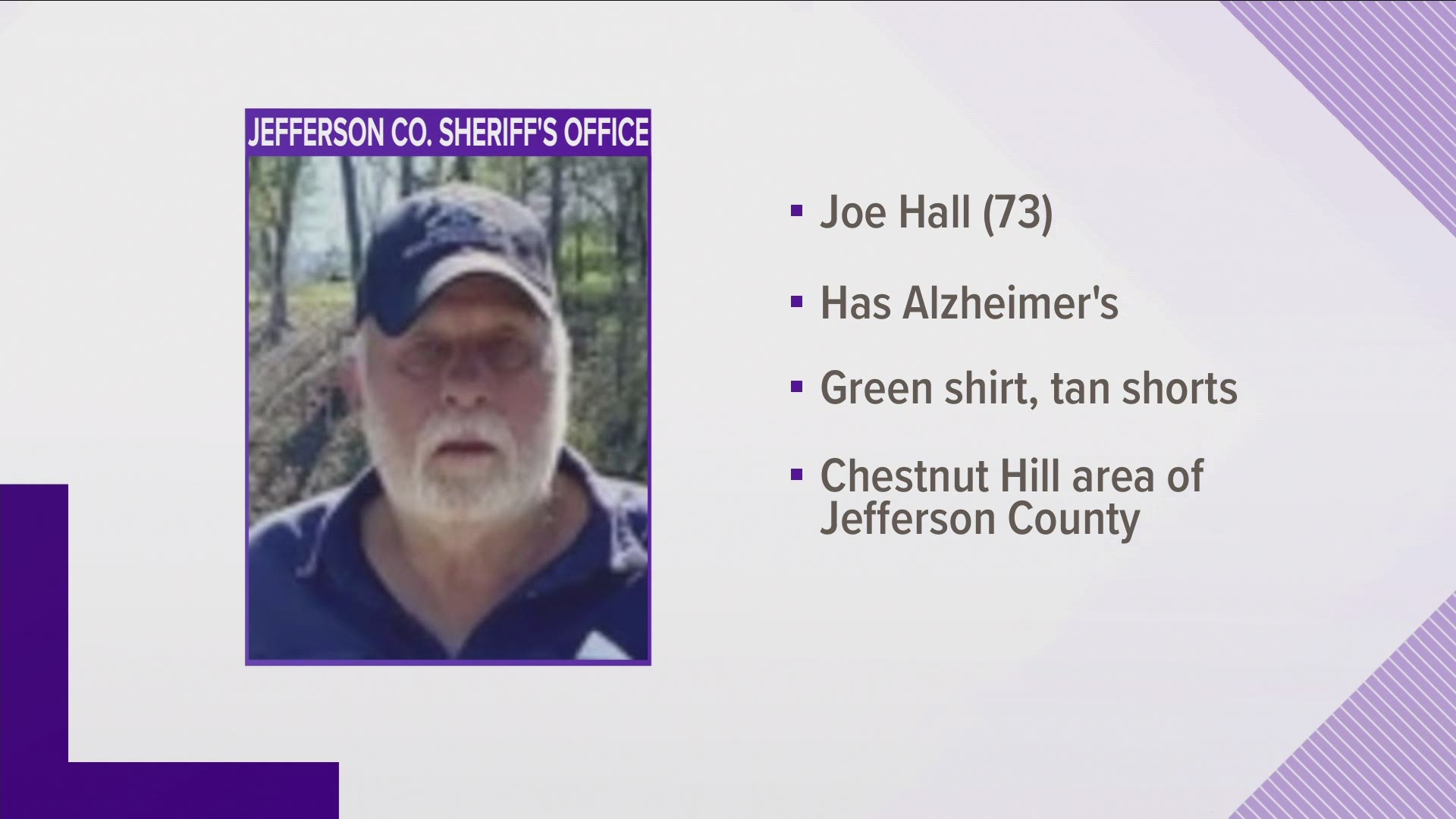 The sheriff said they have no new information and no new leads.

UPDATE (JUNE 3, 2021): The Tennessee Bureau of Investigation has issued a Silver Alert as Jefferson County crews continue to search for a missing man with Alzheimer's.

Joe Hall, a 73-year-old from South Carolina, disappeared in the dead of night in between Saturday and Sunday.

The Hall family was camping in Tennessee for the holiday weekend, but their vacation turned into a nightmare quickly.

The Jefferson County Sheriff's Office got a tip Monday that a driver had seen a man resembling Hall around 8 a.m. Sunday morning. That's the last time anyone reported seeing him. Now, a small orange flag marks that spot.

SILVER ALERT: We need your help to find Joe Hall, who is missing from Jefferson County.

The 73-year-old is 5'9" and weighs 260 pounds. He was last seen Saturday wearing a green shirt, tan shorts, tennis shoes, and a camouflage hat.

Bloodhounds, helicopters and crews across counties have searched air, land and water, including nearby Douglas Lake.

Joe Hall's son, Randy Hall, said they visit Jefferson County for vacations because it's where his dad spent the first 14 years of his life.

Joe Hall disappeared some time after everyone went to bed Saturday night, according to Randy Hall. Joe got up out of bed, slipped outside and disappeared without ever making a sound.

He left with $6 in his pocket and no cellphone.

Randy said Joe has arthritis and has suffered from Alzheimer's for the last five years. His short-term memory is not great, and he has trouble with directions.

"He is not to the point where he's incapacitated, he just can't remember anything," Randy Hall said.

The Hall family has aided in searching for Joe. They are hanging on to every update they can get from the sheriff's department.

"At this point, I hope he has been picked up by somebody, then at least he's somewhere and not in these woods," Randy Hall said.

The terrain around Upper Rhinehart Road, where Joe Hall disappeared, has heavy vegetation. There are steep hills, rocky terrain, rivers and brush.

“At his age and with this terrain, I mean, we have our concerns," Jefferson County Sheriff Jeff Coffey said. "Now we hope for the best and hope for a miracle.”

Crews have spotted wildlife, like bears, in the area, which is also a cause for concern.

There are not a lot of leads right now to where Joe could be, and that's painful for his family.

"Come home, I want my father back," Randy Hall said. "It's just hard not knowing."

Alzheimer's Tennessee says six out of every 10 people with Alzheimer's will wander at some point.

There are measures you can take to protect your loved ones:

Jefferson County authorities are searching for a missing 73-year-old man who suffers from Alzheimer's.

Hall is 5'9" and 260 pounds. He was last seen wearing a green shirt and tan shorts. According to a flier from JCSO, Hall left from a residence on Upper Rhinehart Road in the Chestnut Hill area of Jefferson County.

If you see a man fitting the description of Joe Hall, JCSO encourages you to call 911.