John M. Phillips, a Jacksonville attorney representing the family alongside the Law Offices of Phillips and Hunt, tweeted about the moment Wednesday evening. 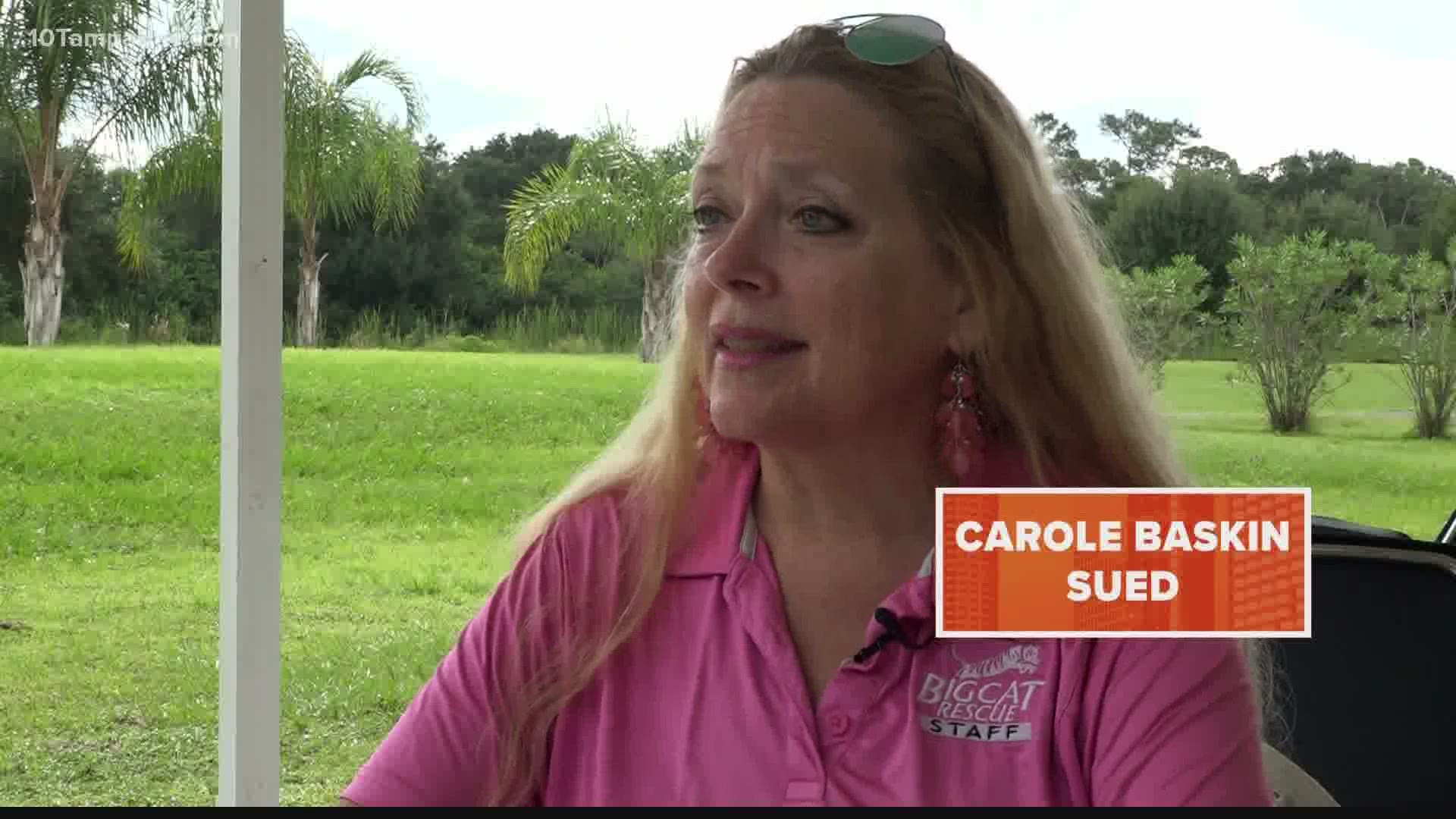 John M. Phillips, a Jacksonville attorney representing the family alongside the Law Offices of Phillips and Hunt, tweeted about the moment Wednesday evening.

"Carole Baskin was served with our lawsuit by Tampa Process LLC. We asked for proof of service and they sent us these photos," Phillips wrote. "Once again, we invite Ms. Baskin to sit down and discuss the death and disappearance of Don Lewis."

As for the proof? Phillips offered a selfie from the company, serving the suit with Baskin in a golf cart.

Carole Baskin was served with our lawsuit by Tampa Process LLC. We asked for proof of service and they sent us these photos. You can view the lawsuit here: https://t.co/wRzg7dLTK9. Once again, we invite Ms. Baskin to sit down and discuss the death and disappearance of Don Lewis. pic.twitter.com/TRQezNS03M

The lawsuit, created to obtain "discovery to get to the bottom of the death and disappearance of Don Lewis," was announced during a press conference earlier this week.

Baskin is one of three named in the lawsuit filed on behalf of Lewis' three daughters and Anne McQueen, Lewis' former executive assistant.

We reached out to Baskin through Big Cat Rescue for comment and were informed by her husband, Howard Baskin, that "we don't comment on ongoing litigation."

10 Tampa Bay also heard from Carole, who did not comment on the lawsuit itself but remarked on the ongoing situation.

"I know you and others are anxious for me to set the record straight but there are some things in the works right now, including this new attack on me," explaining why she has been unable to speak at this time.

Carole also shared that she has "rebutted every false claim in the mockumentary," has been releasing pages from her diary daily online, and her online playlist gives a day-by-day recounting of all she documented and learned over the years.

Baskin posed her own question in her response saying, "What you should be wondering is why my release of everything I know is so threatening to the people who are trying to silence me?"

Attention to Jack "Don" Lewis' nearly 23-year-old cold case resurfaced after the third episode of the docuseries looked into the disappearance of Baskin's second husband. In the episode, Joe Exotic claims Baskin killed Lewis and fed him to her tigers. Baskin denies that.

Now, Phillips and his team will conduct their own investigation into Lewis' disappearance as he says the family is not satisfied with the more than two decades of investigation by the Hillsborough County Sheriff's Office.

A $100,000 reward has also been offered for information in Lewis' cold case, in hopes of encouraging people to come forward.

"We are hoping that with these funds, someone will have the courage to come for it and provide the information necessary to solve this case," said Donna Pettis, one of Lewis' daughters.

While the attention around Netflix's seven-episode docuseries "Tiger King" may have slowed, a family's search for answers in their father's cold case has not.

"I still, to this day, miss my dad," Gale Rathbone, Lewis's youngest daughter, said. "Twenty-three years I've gone to bed every night knowing the only chance I have of seeing him again is in my dreams."

The hype around the docuseries led the Hillsborough County Sheriff's Office to reopen the case for new leads in March. Tips came in daily, but most were missing one key element -- credibility.

Since @netflix and #Covid19 #Quarantine has made #TigerKing all the rage, I figured it was a good time to ask for new leads. #CaroleBaskin #DonLewis #Netflix #Tiger #BigCatRescue #JoeExotic #TigerKingNetflix #HCSO pic.twitter.com/LHoJcBZVOI

Baskin has ardently denied all allegations that she had anything to do with her then husband's disappearance or death, calling the Netflix docuseries salacious and sensation and full of "unsavory lies."

In interviews since, Sheriff Chad Chronister has said he believes Lewis was murdered in 1997 and did not just disappear as was alleged.

"There's a lot of suspicion surrounding his death," Chronister said in an interview with 10 Tampa Bay this past April. "What wealthy person disappears and doesn't take his wealth with him?"

And while he believes more than one person was involved in Lewis' murder, Baskin is "no more a person of interest than anyone else."

Chronister also said while he understands why people would believe she is guilty due to the show's spin, that the sheriff's office can disprove two of its biggest theories related to the meat grinder and septic tank.