Here's what we know about Collierville Kroger shooting

Here's the latest information on the shooting at the Memphis-area grocery store. 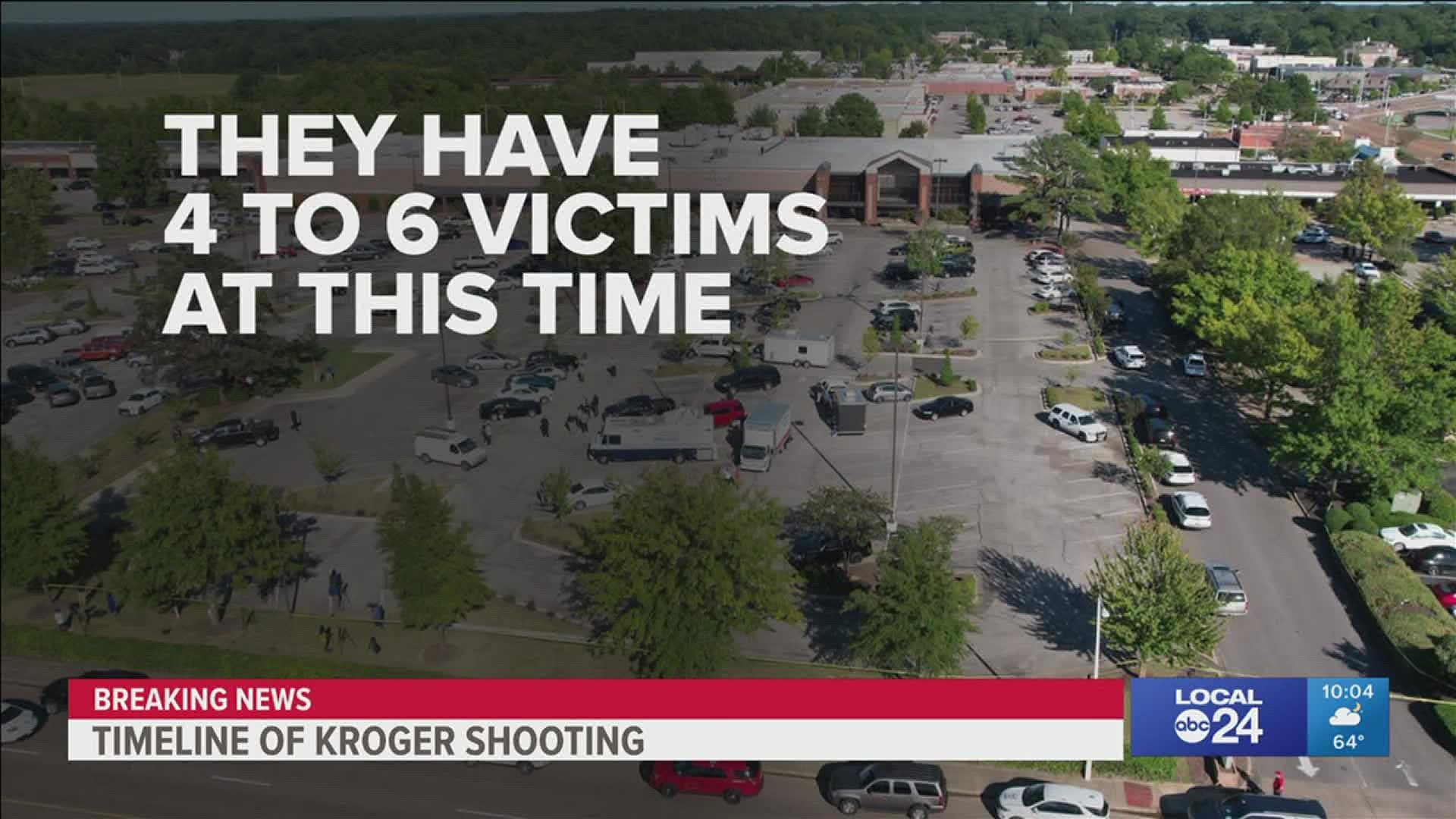 COLLIERVILLE, Tenn. — More than a dozen people were injured in a shooting at a Kroger in Collierville, Tenn. on Thursday in what the police chief said was the "the most horrific event" in the city's history.

How many people were killed in the Collierville Kroger shooting?

Two people have died. One was shot by the gunman, and the suspected shooter died of a suspected self-inflicted gunshot wound, according to Collierville Police Chief Dale Lane.

How many people were injured in the Kroger shooting?

Fifteen people were treated at area hospitals, according to Lane.

Twelve were transported from the scene, while several others were taken via private transportation. Lane described some of the injuries as "very serious." At least one of those was being treated for anxiety and not gunshot wounds at the hospital, according to Lane.

Eight victims were taken to Regional One Health Medical Center in Memphis. One has died, three have been treated and released; four remained at the hospital as of Monday, all now listed as non-critical.

Ten of the victims were employees of the Kroger; 5 were customers, Lane said in a news conference on Friday.

Who was the Collierville Kroger gunman?

Police have identified the shooter as UK Thang.

In an update released on Monday, the Collierville Police Department said Thang moved into Collierville in the summer of 2020. Police said he was asked to leave his job before the shooting Thursday morning.

Was the shooter an employee of the Kroger?

The shooter was a third-party vendor of Kroger, Lane said at Friday morning's news conference.

While authorities have not officially confirmed it, a police source told ABC24 reporter Brad Broders that the shooter had recently been fired from his job.

Who are the victims of the Kroger shooting?

Police have not released the identity of the victims.

Family and friends identified Olivia King as the woman who died in the shooting. Her son posted to social media that she was shot in the chest and died at the hospital.

Collierville Vice Mayor Maureen Fraser described King as a "dear friend" and asked for prayers for the family, as well those impacted by the shooting.

As of Monday afternoon, police said there are four victims that are being cared for at Regional One Hospital.

What type of gun was used in the Collierville Kroger shooting?

Police have not released the type of gun used in the shooting.

What was the motive of the Kroger shooter?

Police have not released any information about a possible motive in the shooting. They did say that there are no known additional threats related to the shooting.

"Let us get through the investigation," Lane said Friday morning.

What has Kroger said about the shooting?

Kroger released a statement saying, "We are deeply saddened by the incident that occurred at our Kroger store located on New Byhalia Rd. in Collierville, TN – a suburb of Memphis. The entire Kroger family offers our thoughts, prayers and support to the individuals and families of the victims during this difficult time. We are cooperating with local law enforcement, who have secured the store and parking lot. The store will remain closed while the police investigation continues, and we have initiated counseling services for our associates. To protect the integrity of the ongoing investigation, we are referring questions to the Collierville Police Department."

The Tennessee AFL-CIO said the Kroger employees some of its union members. President Billy Dycus issued the following statement:

"We are horrified by the images of yet another mass shooting in America. These scenes of violence and terror are even harder to process, because they took place in our own state at a Kroger supermarket near Memphis where some our United Food and Commercial Workers (UFCW) brothers and sisters work. While we still don’t know all of the details, we know that one thing is for certain: no one should fear for their lives or face this kind of horrific violence at their workplace or while shopping for groceries.

Like many other essential workers, the employees at this store have kept food on the tables of Tennessee families for the past year and a half. They have sacrificed so much and continually exposed themselves to a deadly virus when others were able to stay home. Now, their workplace has been devastated by violence. We grieve for all of those who were affected by yesterday's shooting and their families, especially our union brothers and sisters.”

“We are devastated that another act of senseless and horrific violence has occurred at a grocery store. The fear and shock that resulted from yesterday’s events will undoubtedly leave a lingering impact our union members, our customers, and our community for years to come and we are working to make sure our members have the resources they need to begin to process this traumatic event. “Dangerous incidents like this happen far too often and, moving forward, we must do more to prevent them from ever occurring. Given the realities that essential workers face, UFCW Local 1529 believes we must train and prepare essential workers for emergency situations and establish guidelines that provide access to paid leave and counseling. We look forward to working with Kroger to make sure that Memphis’ essential workers, who have faced the threats of a pandemic and mass shootings, are able to do their essential jobs without fear.” - UFCW Local 1529 President Leon E. Sheppard, Jr.