JACKSON, Miss. (AP) — The president of Jackson State University resigned Monday after he was arrested in a prostitution sting in central Mississippi. William By... 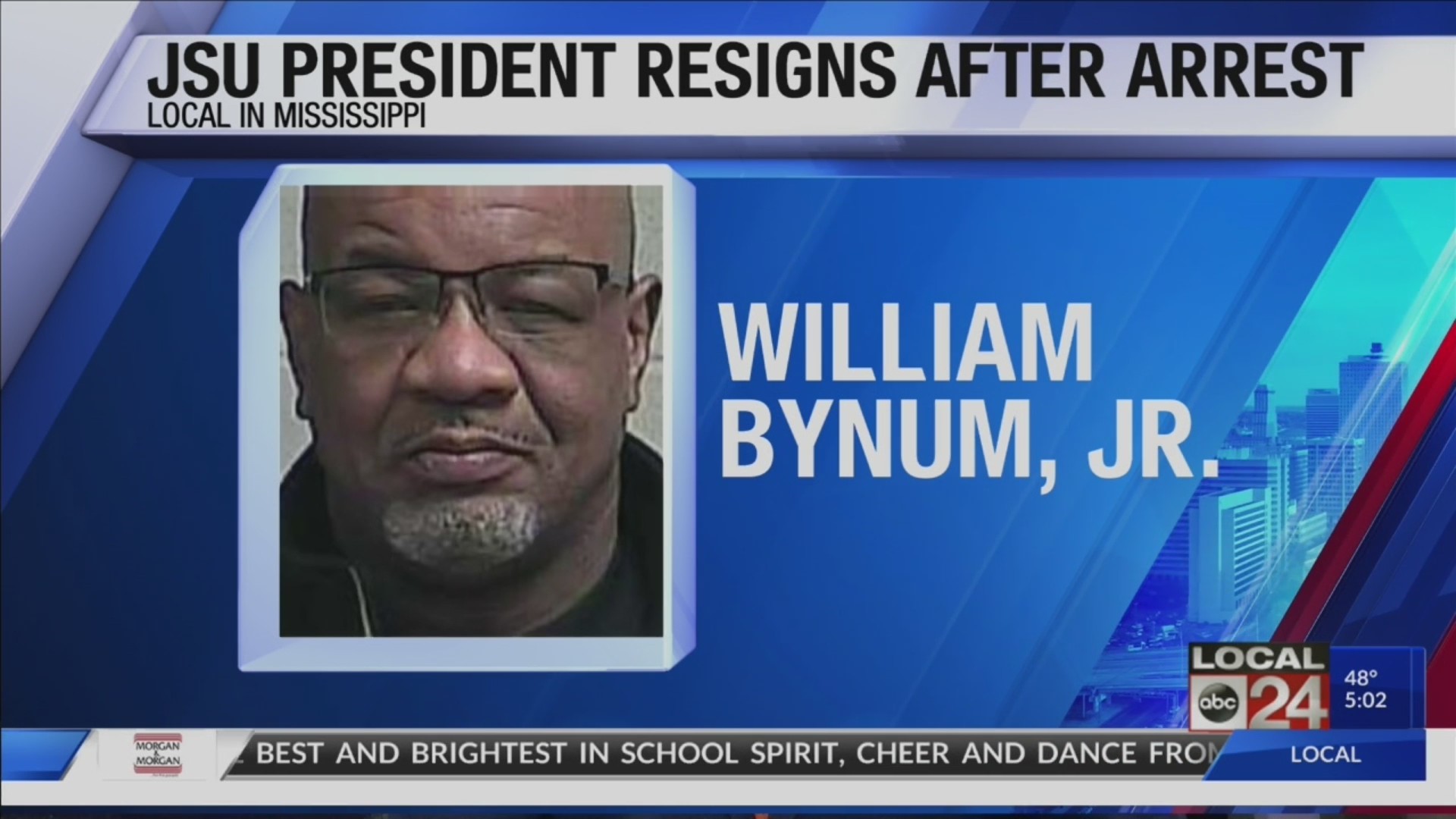 JACKSON, Miss. (AP) — The president of Jackson StateUniversity resigned Monday after he was arrested in a prostitution sting incentral Mississippi.

William Bynum Jr., 57, was among more than a dozen peoplearrested during the weekend in the Jackson suburb of Clinton, according toClinton Police Chief Ford Hayman.

A news release from the Mississippi university system on Mondaysaid Bynum submitted his resignation, and it took effect immediately.

Bynum is charged with procuring services of a prostitute, falsestatement of identity and simple possession of marijuana.

Hayman said during a news conference Monday that the peoplearrested were responding to an online ad for prostitution services, and theywere met by an undercover police officer at a chain hotel near Interstate 20.

The chief was asked if Bynum tried to convince police he wassomeone else.

“Without getting into particulars, yes, he was charged with that— providing a false identity,” Hayman said.

Bynum had been president of Jackson State since 2017 afterserving four years as president of Mississippi Valley State University.

Among the other people arrested was Shonda McCarthy,director of the Jackson State University art galleries. McCarthy, 46, wascharged with procuring services of a prostitute and possession of marijuanawhile operating a motor vehicle.

The Associated Press left a message Monday with thecommunications office at Jackson State. The call was not immediately returned.It was also not immediately clear whether either Bynum or McCarthy isrepresented by an attorney.

Bynum faced protests from some alumni and students when he wasfirst chosen for the Jackson State presidency because he was not among thethree initial finalists. The university was having financial problems afteroverspending by a previous president. Bynum said the university would facethree to five years of austerity.

“I understand I may not be your choice,” Bynum told one angrystudent in 2017. “All I say to you is, watch me work.”

(CLINTON MS POLICE NEWS RELEASE) – Over the weekend (February 7-8), Clinton Police Detectives conducted a prostitution sting. Contact(s) with offenders are made online through “dark web” sites, services and location at a local hotel were agreed upon.

Shonda McCarthy, age 46, of Jackson, Mississippi: Procuring Services of a Prostitute and Possession of Marijuana while Operating a Motor Vehicle.

The Clinton Police Department did not identify any patterns or activity to suggest that prostitution or human trafficking is prevalent in Clinton.

The Board of Trustees of State Institutions of Higher Learning named Thomas Hudson as Acting President of Jackson State University at its meeting held earlier today in Jackson, effective immediately. Hudson currently serves as Special Assistant to the President and Chief Diversity Officer for Jackson State.

1990: Actor Jonathan Lipnicki, best known for his childhood roles in films such as “Jerry Maguire,” “Stuart Little,” “The Little Vampire” and “Like Mike,” is born in Westlake Village, California. He’s seen here in 2013.

As Special Assistant to the President and Chief Diversity Officer, Hudson has served on the executive Cabinet and provided guidance to senior leadership on all topics related to the university’s future.

“We are extremely pleased that Thomas Hudson has agreed to serve as Acting President,” said Hal Parker, President of the Board of Trustees of State Institutions of Higher Learning. “As both an alumnus and a current staff member, he has a deep love for and understanding of the campus and all it means to the students, faculty, staff, alumni and the state.”

As Special Assistant to the President and Chief Diversity Officer, Hudson served on the executive cabinet and provided guidance to senior leadership on all topics related to the university’s future course and trajectory. With the Division of Human Resources and Office of General Counsel under his purview, Hudson oversaw institutional EEO and Title IX implementation and collaborated with other executive administrators on matters of curriculum, guidelines and practices.

He also established collaborative partnerships with the University Veterans Center and Office of Disability Services to address the underrepresentation of employees from these groups. He also served as the president’s liaison for the Division of Athletics.

Hudson conducted university-wide labor utilization analysis to determine areas of improvement as it relates to the university affirmative action plan and reorganized the Staff Development Center and assisted in developing courses in employee relations, development and compliance.

“As a Jackson State alumnus and senior-level cabinet member, Thomas Hudson is committed to the success of the university and extremely knowledgeable about all facets of the campus,” said Dr. Alfred Rankins Jr., Commissioner of Higher Education.

A member of the Jackson State staff since 2012, Hudson has also served as Chief Operating Officer/Chief Diversity Officer, Chief Diversity and EEO Officer/Title IX Coordinator. As Chief Operating Officer, Hudson implemented cost-saving measures that resulted in a 10 percent decrease in the university’s operational budget, coordinated academic and administrative restructuring efforts, resulting in an annual savings of $4 million, and led institutional efforts that changes a projected year-end deficit to an approximate $3 million cash balance.

Appointed as the inaugural Chief Diversity and Equal Opportunity Officer at Jackson State, Hudson received the Presidential Creative Award Grant for efforts in design a program to bring awareness of interpersonal violence prevention to the student body and designed and implemented the first university-wide training designed to eliminate implicit bias for search committees. In addition, he developed strategies for increasing the number of female faculty members in STEM disciplines, resulting in a 30 percent increase in hiring of women in these disciplines over a three-year period.

Hudson holds a bachelor’s degree in political science from Jackson State University and a law degree from the University of Mississippi. Before joining the staff at Jackson State, Hudson founded his own law practice and served as an EEO specialist for the Department of Homeland Security/FEMA in Clinton.

Hudson serves as Co-Chairperson on the JSU Strategic Planning Committee and Vice Chairperson of the university system’s Chief Diversity Officers’ Council. He is a member of the Margaret Walker Alexander Center Board of Directors and the JSU Athletics Hall of Fame Foundation Board of Directors. He served as the Bias and Policy Lead for the National Science Foundation Advance Grant at Jackson State from 2013 to 2017 and served as Chairperson of the Director of Disability Services Search Committee in 2016.

Hudson and his wife, Phylandria, have two daughters.

The Board of Trustees will discuss the future leadership of Jackson State at its regular Board meeting next week.