MARIETTA, GA – August 17 marks the anniversary of an ugly event in Georgia’s – and America’s – history; what’s believed to be the only known lynching of an American Jew.

The death of Leo Frank is a story whose effects still ripple today through our region.

“Any act of hate – really, the lesson should be, ‘Why? Why did we do that?’ and ‘How do we make sure that never happens again?’” said Dr. Richard Banz, executive director of the Southern Museum of Civil War and Locomotive History.

His face, his eyes are old sketches. His name is a headline. Leo Frank is a relic of the past that still looms over the future.

The story of Leo Frank begins with the story of Mary Phagan. At age 10, she left school to work. At age 13, at her workplace, she was found dead.

“It’s a 13-year-old, working girl who had gone on Confederate Memorial Day to pick up her paycheck of $2,” said Lewis. “This is a young woman who had had a very hard life. To be murdered in such a brutal way, very quickly captivated the nation.”

Suspicion soon fell on Leo Frank, the superintendent of the factory where Phagan was found. But Frank’s trial quickly became about more than the law.

“You have this Southern, white, 13-year-old girl, who is murdered at the hands of what becomes this evil, Northern foreigner,” Banz said.

“He was the ultimate New York Jew, living in the South, and that brought out a lot of anti-Semitism,” said Mark Moskowitz of the Anti-Defamation League. “People had pretty much convicted him before the trial even began.”

The investigation was suspect.

“The police work was shoddy,” said Lewis. “There were just a whole host of things that went wrong and would lead most scholars and lawyers to conclude that the outcome was not legitimate.”

The outcome was guilty. To this day, it remains up for debate. What happened next does not.

“That a mob could go into a prison, not be stopped, grab an inmate, bring them back to Atlanta, and be lynched,” said Moskowitz.

Two months after his conviction, and after the governor had commuted Frank’s death sentence to life in prison, Frank was abducted from his prison cell in Milledgeville by a mob and driven to Marietta, where he was lynched.

“It was a festival,” Lewis said. “Almost like a Roman coliseum.”

“People would show up; they would bring children to witness the lynching,” said Banz. “No one’s covering their face. No one’s ashamed to be a part of this; they want to be seen.”

“He is the only Jew that has ever been lynched, and it was really the low point for the American Jewish community,” Moskowitz said.

The relics become real when we view how they have rippled. Soon after Frank’s lynching, the two-year-old Anti-Defamation League catapults into a national force against hate. And on Stone Mountain, the Ku Klux Klan rallies and re-forms, an homage to the “Knights of Mary Phagan.” Both organizations exist today. 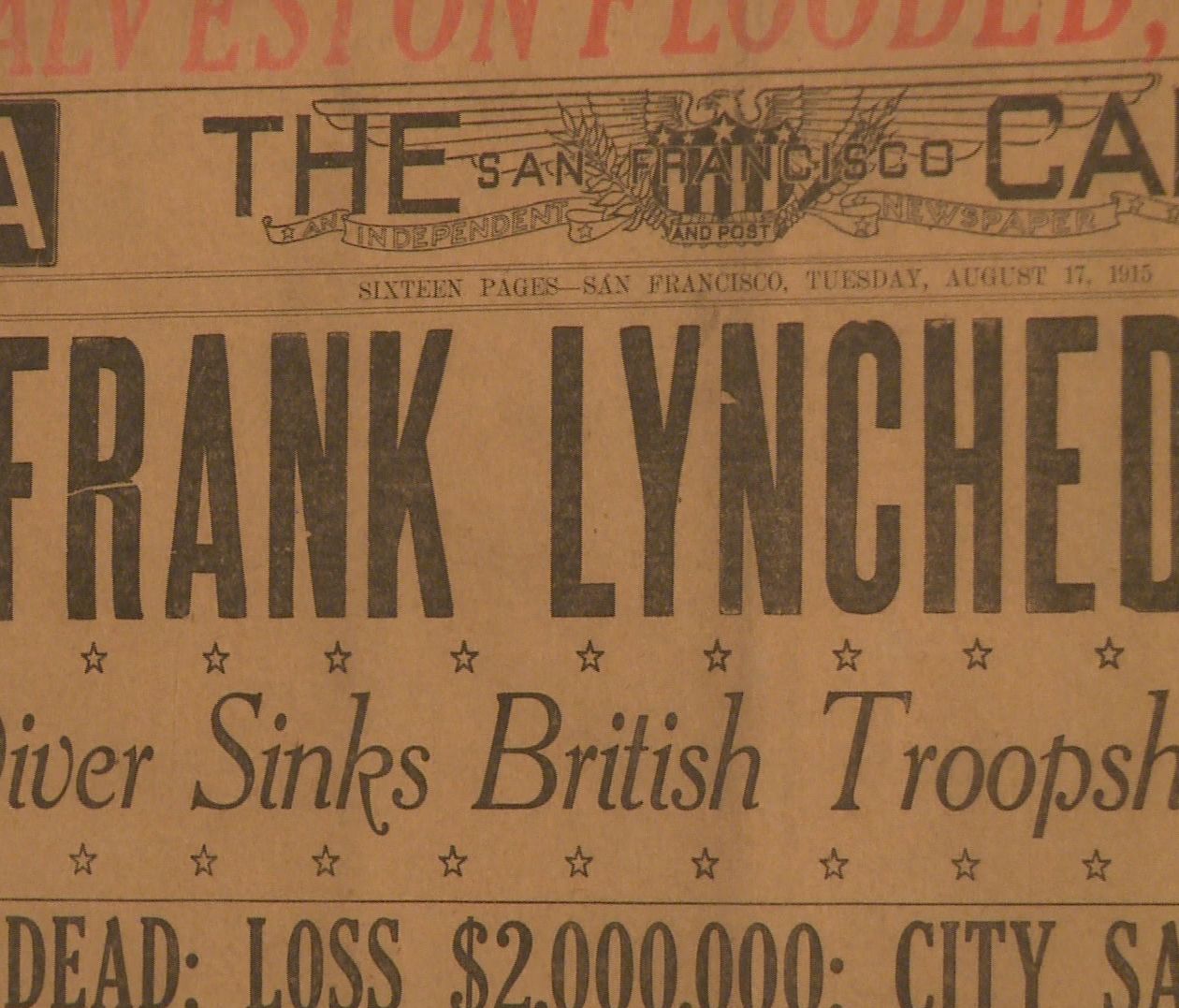 Today’s Atlanta holds more than 100,000 Jewish residents and far fewer acts of anti-Semitism. Starting Monday, the Southern Museum in Kennesaw opens an exhibit in Leo Frank’s name – mere miles from where he was lynched.

“They were very grotesque, horrifying scenes of our past,” Banz said. “The only way that we ever really rid ourselves of that is to have open dialogue.”

The question always remains: How far have we come?

But the lessons of Leo Frank still shine more than 100 years later.

“We are just two months shy of nine people in Charleston being murdered for being African-Americans. That is pure evil; that is pure hate,” Moskowitz said. “There are still plenty of people, plenty of groups, that are facing hatred and discrimination -- and we have to continue to fight to make our society a better place.”